Accessibility links
Female Pilot Reflects On War And Evolving Army Army Chief Warrant Officer Stephanie Rose was among the first women to fly the Apache attack helicopter. She is currently serving her third combat tour, this one in northern Afghanistan. She loves her job but has overcome professional and personal challenges along the way. 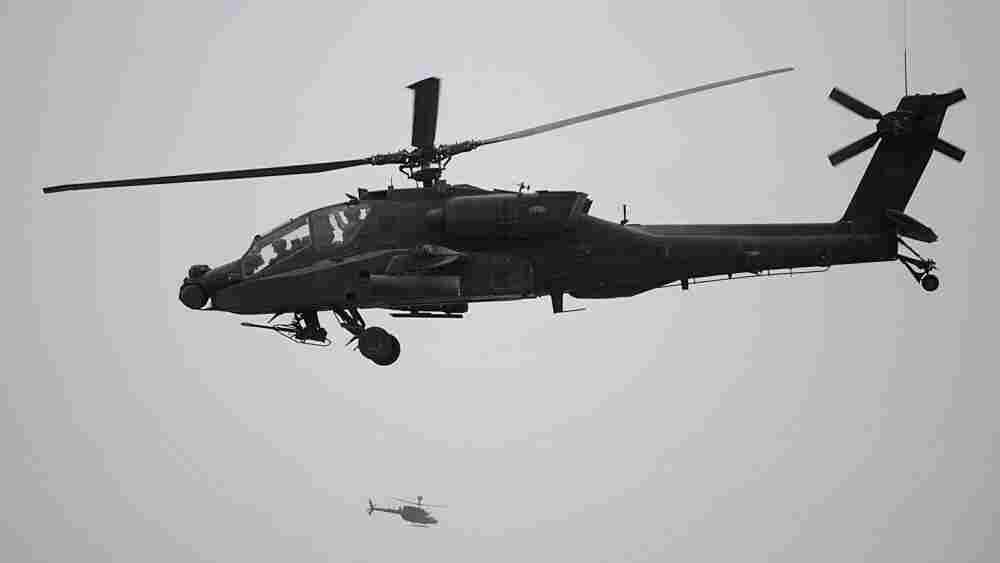 Women have been flying Apache attack helicopters in the U.S. Army for about 15 years. Chief Warrant Office Stephanie Rose was among the first women to fly the Apache and is currently on her third combat tour, this time in northern Afghanistan. Yuri Cortez/Getty Images hide caption

In Afghanistan and Iraq, the U.S. military has fought wars unlike any in American history. Neither war has had clear front lines -- meaning that anywhere can turn into a combat zone.

And that means that women, who officially don’t have combat roles, have been battle-tested -- few more so than Chief Warrant Officer Stephanie Rose. 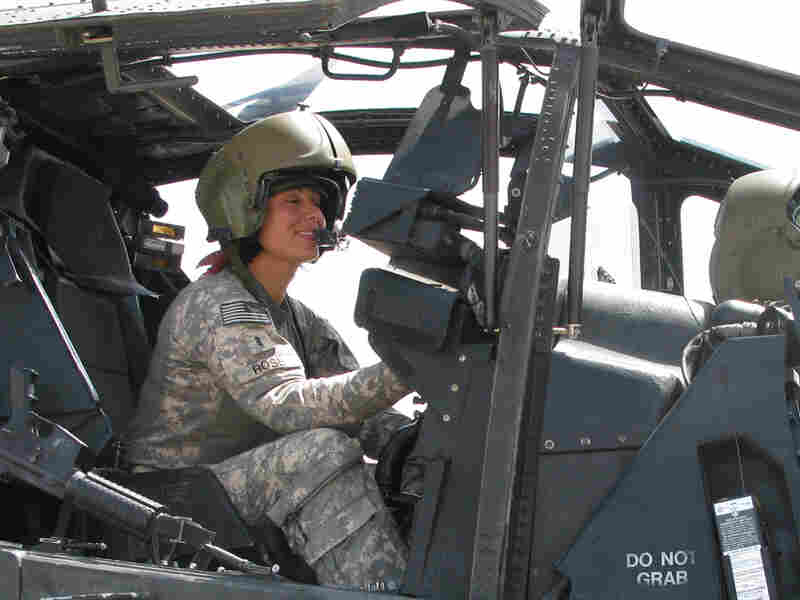 Stephanie Rose, an Apache pilot deployed with the 4th Combat Aviation Brigade in Afghanistan, sits in the cockpit. She says she joined the Army just a couple of months before women started flying the attack helicopters. Quil Lawrence/NPR hide caption 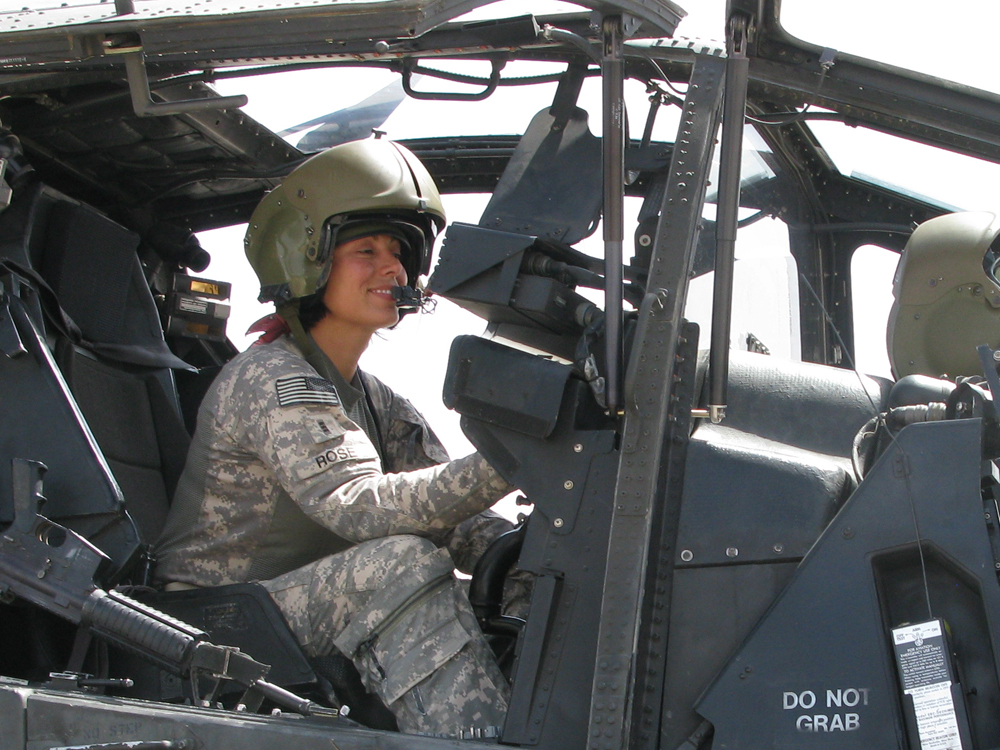 Stephanie Rose, an Apache pilot deployed with the 4th Combat Aviation Brigade in Afghanistan, sits in the cockpit. She says she joined the Army just a couple of months before women started flying the attack helicopters.

Rose was among the first women to fly the Apache attack helicopter, and she is currently serving her third combat tour, this one in northern Afghanistan.

The U.S. Army’s 4th Combat Aviation Brigade was deployed to Afghanistan last spring, bringing much-appreciated air power to NATO forces in the north of the country, where Taliban activities are on the rise.

As a pair of landing choppers blasted dust across the airstrip, Rose and Capt. Nicole Jordan showed a group of visitors around the cockpit of an Apache Longbow helicopter. Even after hundreds of flight hours, the aircraft still clearly holds a thrill for anyone who gets to pilot one.

"There’s nothing I could think of I’d rather be doing. It’s better than driving a race car," Rose says.

Rose and her sometimes co-pilot Jordan initially resisted the suggestion that it’s at all remarkable for women to be flying combat helicopters. The Apache flies the same, no matter who is at the controls, Jordan says.

“We all do the job, and some of us do it better than others," she says.

Blazing A Path For Others

Women have been flying Apaches for 15 years, she says. But as it happens, that’s about as long as Rose has been in the Army.

"I joined in June of 1995, just a couple of months before women started flying Apaches," she says.

It started, as so many soldiers like to say, with misinformation from a recruiting officer. Rose grew up in Dallas and needed money for college. She knew nothing about the Army when she walked into the recruiter’s office, and he asked her what she would like to do.

"I looked at the wall and I saw a Black Hawk with the soldiers rappelling down the rope. And I said, 'I’d like to do that. What do I have to do to get to do that?' " she recalls.

The recruiter told her women weren't allowed to fly helicopters.

We talked about it and I felt like it was my obligation. I explained to him that when you make a commitment to something ... you have to see it through.

Chief Warrant Officer Stephanie Rose, on her explanation to her young son of why she went to war

The recruiter was trying to fill a different quota, but as soon as Rose discovered that women were, in fact, flying choppers, she rushed to apply for flight school. When she was accepted in 1998, only 18 women were flying Apaches. Rose was the only woman in her class, and several pilots in her company refused to fly with her -- because she was a woman.

“Those guys are not around anymore today," she notes.

Even her company commander was OK with the men's reluctance.

"He said, 'Hey, you know what, I can't force you to fly with a woman, and I can kind of understand why you would think or feel that way, so I'm not going to make you,' " Rose recalls. 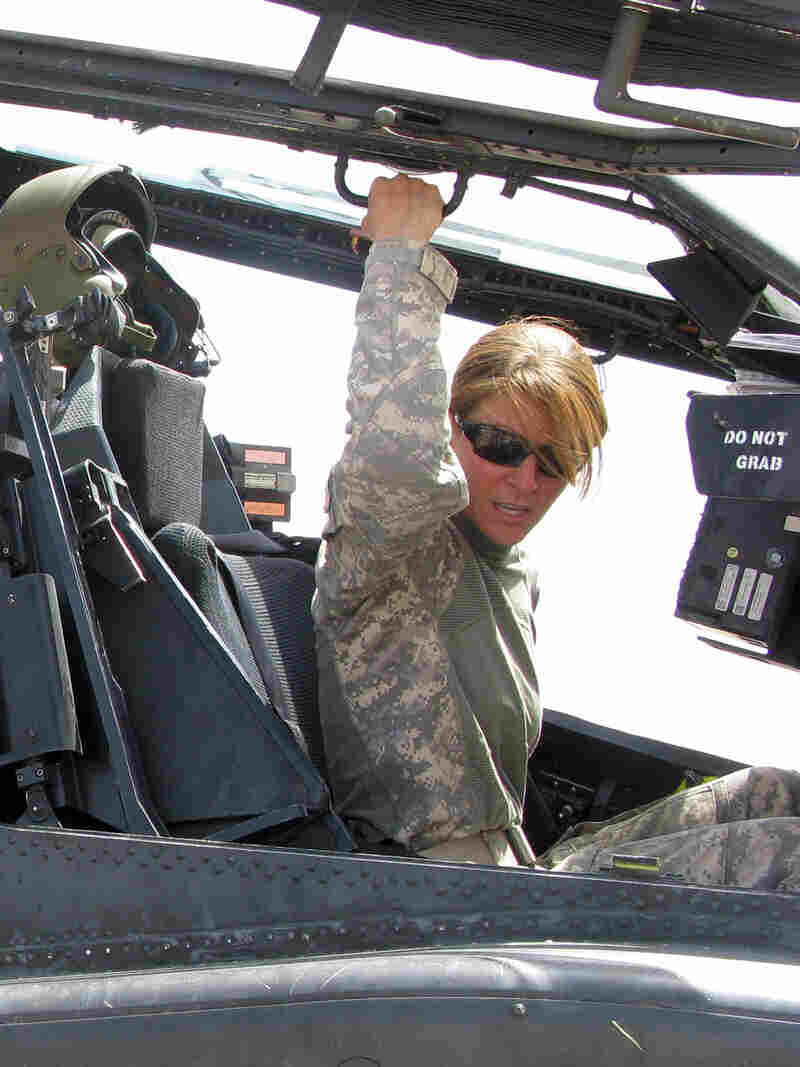 Capt. Nicole Jordan, who has been in the Army for five years, sometimes serves as Rose's co-pilot. Quil Lawrence/NPR hide caption 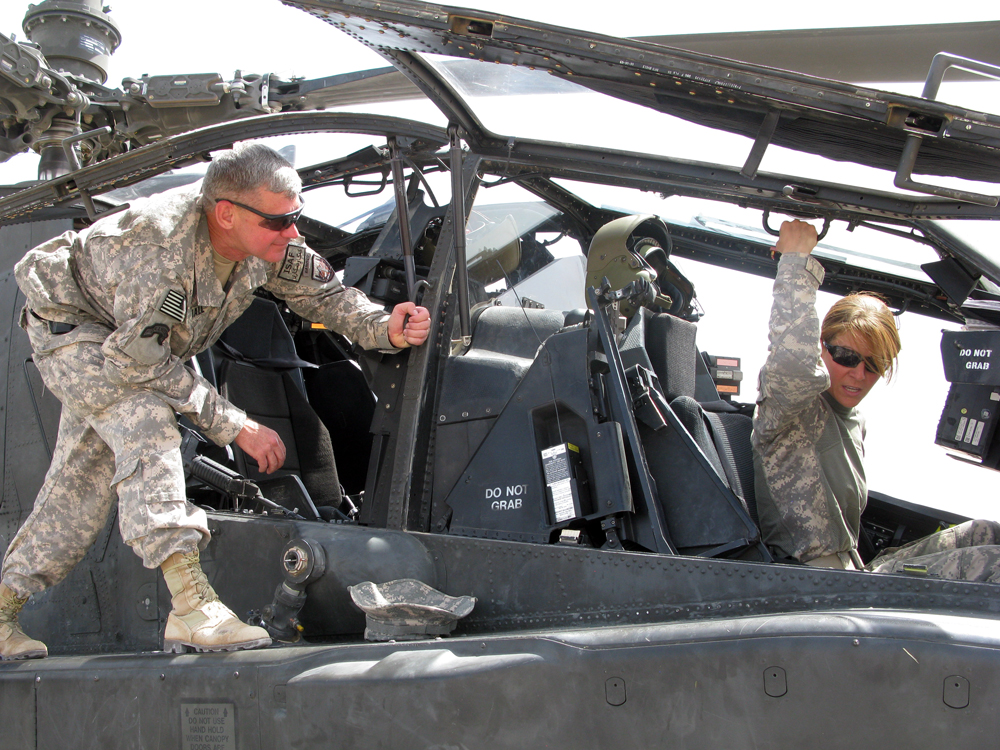 Capt. Nicole Jordan (right), who has been in the Army for five years, sometimes serves as Rose's co-pilot.

It’s been years since she’s heard as much as a wisecrack about female pilots. For a pilot like Jordan, who has been in the Army for just five years, it has made the path much easier.

Being married to another pilot also helps, says Jordan, who knows some people who get out of the Army because they want to start families.

For Rose, family is also a concern she’s had to reconcile.

"I’ve been a single mom for 13 1/2 years -- he’ll be 14 in January -- through flight school, through deployments, through everything," she says.

As a mother, Rose can’t help but mention that he is a straight-A student, a gifted athlete and in possession of a heart of gold. Her friends and sometimes her father have taken care of her son through some hard times, especially her first trip to Iraq in 2006.

"I think at first it was tough for him. We didn’t really know what to expect my first deployment. [Iraq in 2006] was tough. We talked about it and I felt like it was my obligation. I explained to him that when you make a commitment to something ... you have to see it through -- so, hard lesson at an early age, I guess,” she says.

Iraq in 2006 was difficult -- many helicopters went down and there were many medevac missions to accompany.

Rose returned to Iraq in 2008, which was better but still no joyride. That deployment included her closest call to date while flying security during an operation north of Baghdad. Ground forces radioed her and another chopper to concentrate on three men running out the back of a building; one had a suicide vest.

Rose was in the "low bird," watching the men with her naked eye.

"He decided to detonate his vest, and tried to time it so it detonated on my aircraft. The blast and the concussion from the explosion picked up the back end of my aircraft and kind of pushed us forward in a way, which was probably the first time I really felt like I didn’t have control of the aircraft," she recalls.

"You could feel the heat in the cockpit; you could feel the concussion from the explosion. ... It’s probably the first time I thought I had exceeded my own personal limitations in the aircraft," she says, laughing.

Rose brought her Apache home safely, if a bit worse for wear.

Rose is back for a third combat tour, which will last through next summer. Now, the strategy in Afghanistan has become as much about when not to shoot as when to open fire, with civilian casualties a pivotal issue. The power to see in the dark and hit targets thousands of yards away can be intoxicating, but another high-tech gadget onboard the Apache records the pilots' every decision, says Jordan, the captain.

"You own every one of those bullets that come out. It's not a decision I am going to make by myself. It’s a team decision, and there’s a lot of consideration and a lot of research on the scene," she says.

There are friendly NATO and Afghan troops on the ground, there are often innocent civilians, and there are political considerations that come down to one question, says Rose. “I’m cleared to fire, the ground commander has cleared me to shoot, should I go ahead and pull the trigger? Is me taking this person’s life going to make a difference?" she asks.

Rose says she saw major changes between her first deployment to Iraq, when a sectarian civil war burned through the country, and her second trip there, when the violence cooled and life began creeping back to normal.

Though the two countries are different, she hopes for a similar improvement in Afghanistan -- even if she has to see it from high in the air.