Accessibility links
For Chile, Colossal Trouble On Easter Island The monumental statues of Easter Island draw tourists from around the world. But the modern-day descendants of the people who made those ancient figures, the indigenous Rapanui, have a conflict with the Chilean state. They want to recover ownership of their island. 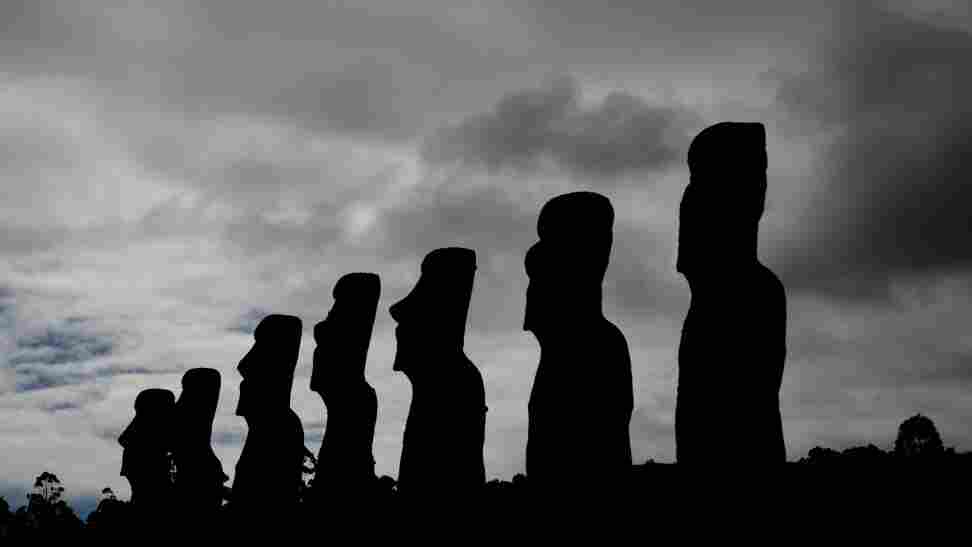 Easter Island's ancient stone statues number nearly 1,000 and stand like sentries on the dramatic landscape. The descendants of the indigenous Rapanui people who made the carvings have a dispute with Chile over land and rights. Martin Bernetti/AFP/Getty Images hide caption

The monumental statues of Easter Island have made the isolated island, more than 2,000 miles off the coast of Chile, an international tourist destination that carries the U.N. designation as a World Heritage Site.

But the modern-day descendants of the people who made those ancient statues, the indigenous Rapanui, have a conflict with the Chilean state.

When Chile took over in the late 19th century, the Rapanui were pushed off their lands. Several thousand Rapanui still live on Easter Island, but they say outsiders now control the island, including its lucrative tourism industry.

I'm going to occupy the land that rightfully belongs to me.

One family is taking a stand.

On a breathtaking rocky point that juts out into sapphire-blue water, the Hanga Roa Hotel is a luxury eco-resort and spa -- at least, it was supposed to be until the Hito clan took it over.

On a recent day, dozens of men, women and children were camped out on the lobby's couches. They evicted hotel staff, and they cook traditional Rapanui food on outdoor fires.

Santi Hitorangi, a member of the Rapanui (pronounced rap-ah-NEW-ee), said he started this chain of events by planting a garden next to the hotel, which sits on land that used to belong to his clan.

Decades ago, the property was acquired by the government, and then traded between private owners. By law, only Rapanui can own land on Easter Island. But the law is not strictly enforced.

Hitorangi said the Rapanui want to recover ownership of the entire island. When charges were pressed against Hitorangi, he went to the U.S., where he is now based. 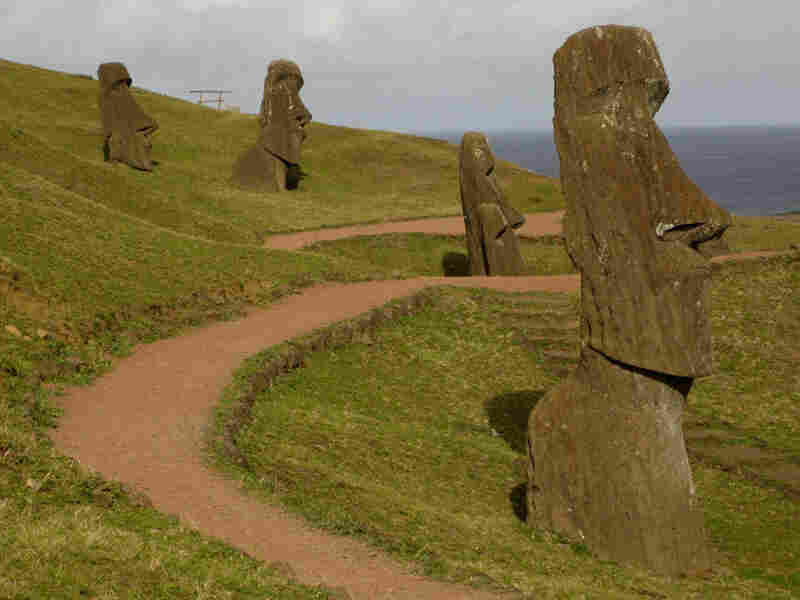 "First and foremost is the title to the land, because there you have the right to determine local politics, to represent the Rapanui people, the Rapanui interests, culture," he said by phone from his home in Goshen, N.Y. "Bear in mind that the presence of the colonial government of Chile in Rapanui has one main purpose -- to assimilate us to them."

The Rapanui are the original inhabitants of this windswept piece of grass, rock and sand. Geographically, Easter Island is part of Polynesia. It is home to nearly 1,000 mysterious statues called moai, positioned across the island like sentries amid a dramatic setting of volcanic stone cliffs above the ocean.

When Chile laid claim to the island just over a century ago, it simply corralled the Rapanui into the island's one town, the village of Hanga Roa, and leased the rest to a sheep farm. It wasn't until the 1960s that the Rapanui became Chilean citizens.

Today, the village has a steady stream of tourists, which means it has electricity and water. Many Rapanui work in tourism and live in small cement or wood houses topped by metal roofs. Some still use horses to get around and do work.

We have good intentions to dialogue and resolve this problem peacefully.

The Rapanui are fine with tourists coming to their island. It is the unchecked flow of Chileans they are upset about.

Angela Tuki is part of the clan that has taken over the Hanga Roa Hotel.

"We're tired of explaining everything to the state. Everything they do here goes badly. Especially immigration -- it's not immigration, it's an invasion," she said. "Since there's no border between the island and the mainland, the state doesn't listen to us as a distinct ethnic group."

The Hito clan has taken over the one hotel, but dozens of other properties in town are being occupied by other clans with ancestral claims. 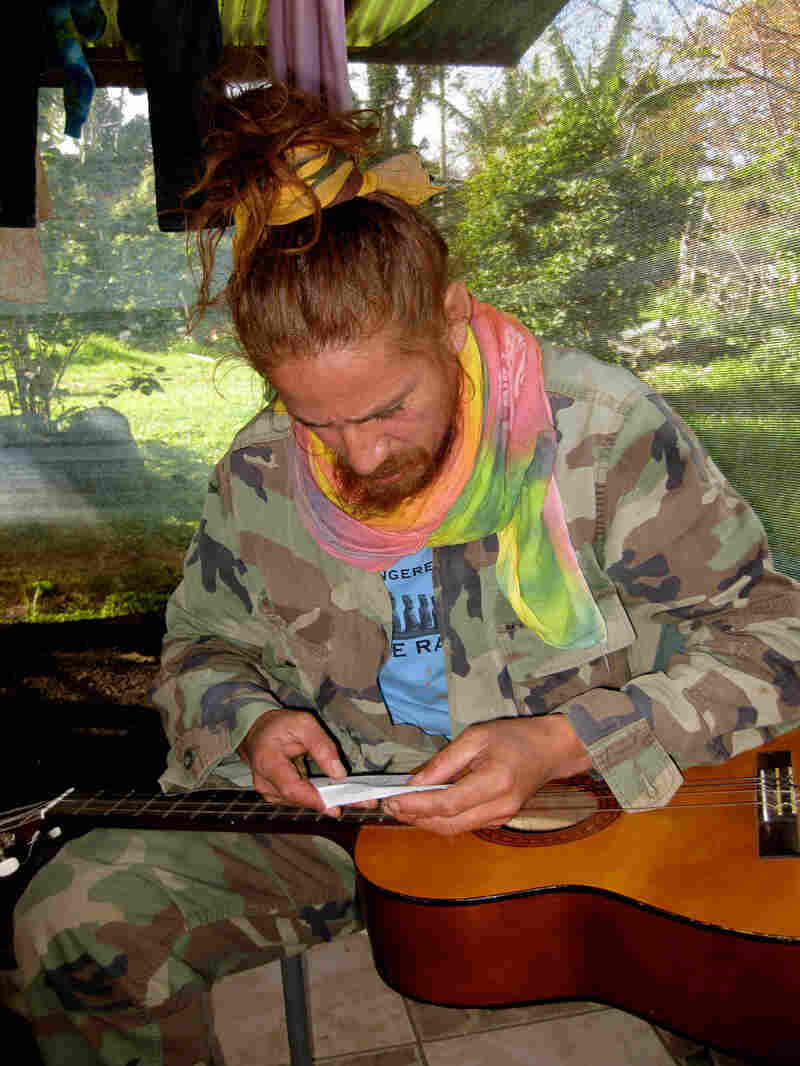 Tihi Tuki, an indigenous Rapanui, tunes his guitar at his workshop. He makes a living from woodworking, music and odd jobs on Easter Island. Annie Murphy for NPR hide caption

The island's governor resigned because of the situation. Interim Gov. Jorge Miranda -- who is from mainland Chile -- said the Rapanui can't just expect the current government to solve century-old problems.

"Unfortunately it's true that there were abuses and human rights violations. But it happened in another context, under another administration. We have good intentions to dialogue and resolve this problem peacefully," he said.

But many Rapanui have lost faith in the Chilean government and don't even identify themselves as Chilean.

Tihi Tuki, a member of the clan occupying the Hanga Roa Hotel, wears fatigues as if in combat and has a topknot of rust-colored hair.

Tuki spent years collecting garbage in town and said he quit because he felt like a servant to Chile. He tattooed the word "trash" on his right hand in Rapanui, so he wouldn't forget the experience. Now he plays music, does woodworking and finds odd jobs.

Tuki lives in a shelter made of salvaged metal near Anakena Beach, an isolated cove on the north end of the island. It is also a popular spot for tourists.

"I'm the heir to this place; this has nothing to do with the Chilean government. And I'm going to occupy the land that rightfully belongs to me," Tuki said.

But the Rapanui face big challenges and constant setbacks. Police recently evicted the Hito clan from the Hanga Roa Hotel.

And the clan went right back and reoccupied it.