The business of green building is growing, even though the construction market as a whole has been in a slump.

The U.S. Green Building Council, or USGBC, and its certification system are swaying the industry -- creating cachet around green buildings.

The company is influencing policy, but some critics say it isn't delivering on its environmental promises.

In Washington, LEED Is Law

Stoddert Elementary School in Washington, D.C., is the site of a sparkling new building addition and rehab. Last month, crews were still putting the finishing touches on the landscaping and a new glass wall that blends into a beautiful 1932 brick schoolhouse. 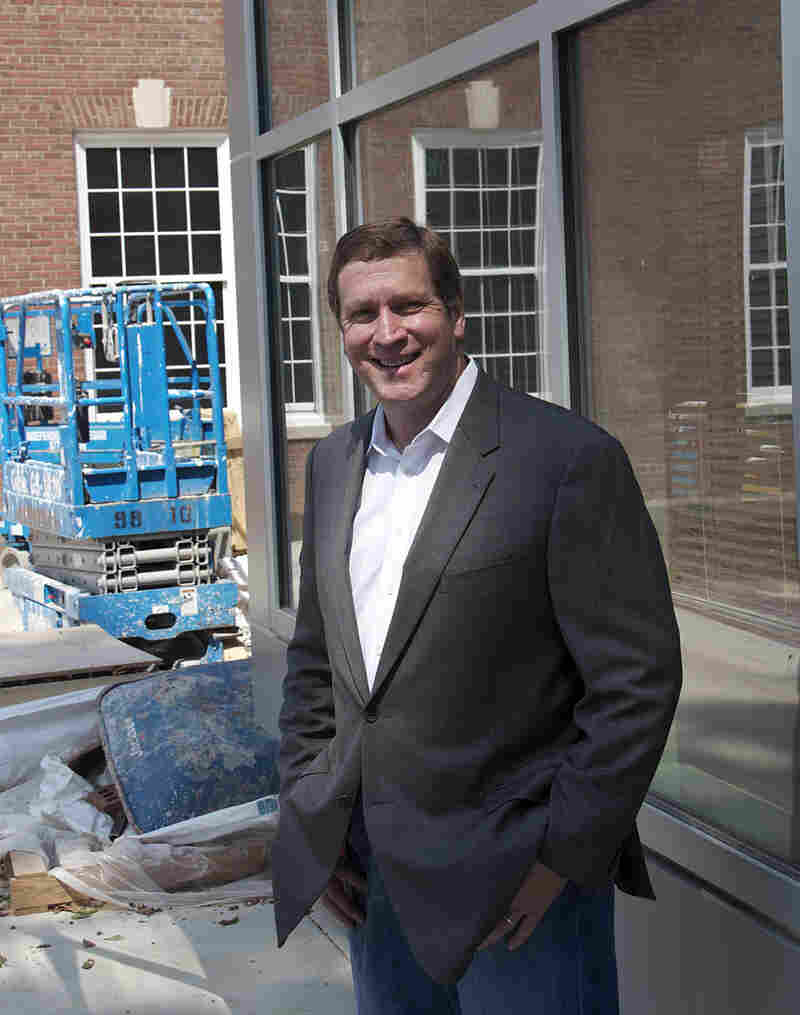 Rick Fedrizzi, CEO of the U.S. Green Building Council, outside Stoddert Elementary School in Washington, D.C. Stoddert was renovated this summer, and new glass walls now merge with the old 1932 facade. The school is expected to earn LEED Gold certification for its renovation and new addition. Franklyn Cater/NPR hide caption 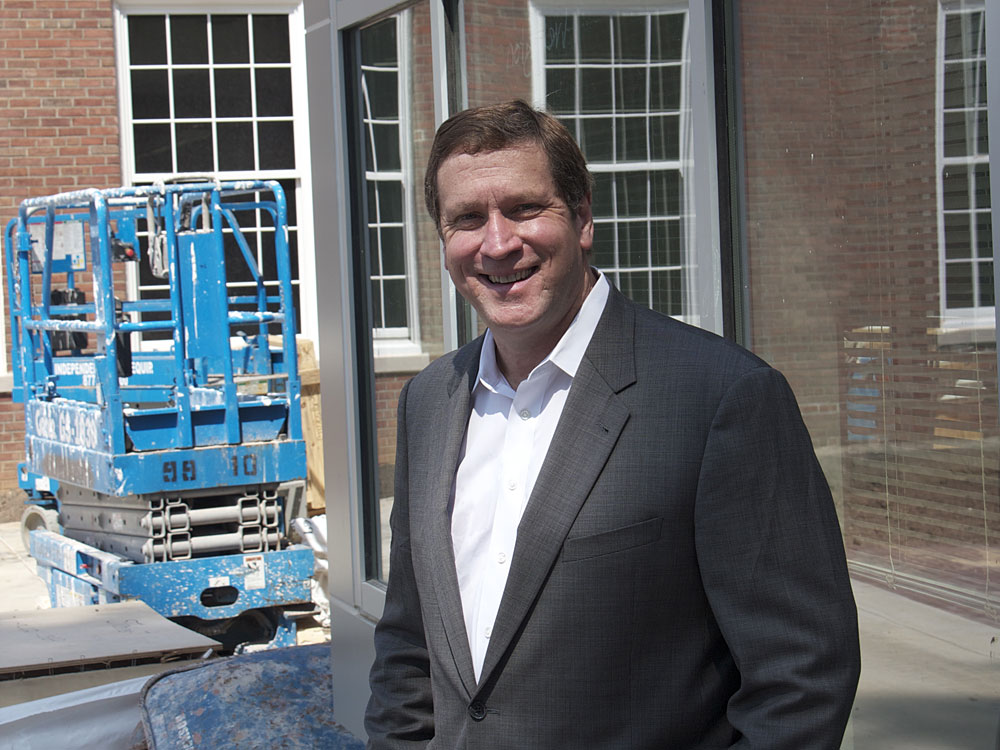 Rick Fedrizzi, CEO of the U.S. Green Building Council, outside Stoddert Elementary School in Washington, D.C. Stoddert was renovated this summer, and new glass walls now merge with the old 1932 facade. The school is expected to earn LEED Gold certification for its renovation and new addition.

"Architecture can no longer be just sculpture," says Rick Fedrizzi, head of the USGBC, the private nonprofit that runs the Leadership in Energy and Environmental Design certification system known as LEED. Architecture must be about performance, Fedrizzi says, especially in the case of schools.

"We have the ability through the bricks and mortar to change the way our kids learn, absorb information, interact with their teacher, and ultimately have the ability for a much more productive life," he says. "It's a moral objective of all of us to make sure that this happens across the board."

In Washington, it's more than an objective -- it is the law. All new public buildings must achieve LEED certification.

LEED is a force to be reckoned with in the construction world. Fourteen federal departments and agencies, 34 states and more than 200 local governments now encourage or require LEED certification. Some places offer incentives to certify. Others, like Washington, mandate it as a kind of code.

Under LEED, the environmentally conscious features of Stoddert will be tallied up, and the USGBC will award a plaque certifying the school as a green building.

Architect Mary Rose Rankin of Ehrenkrantz Eckstut & Kuhn says the designers paid a lot of attention to the acoustics of this building because noise levels are important for learning. It's one of the LEED requirements. 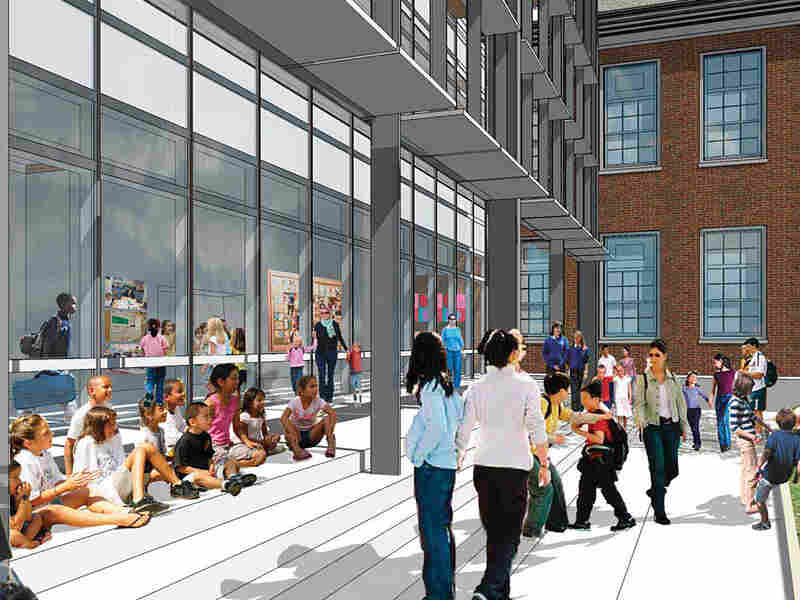 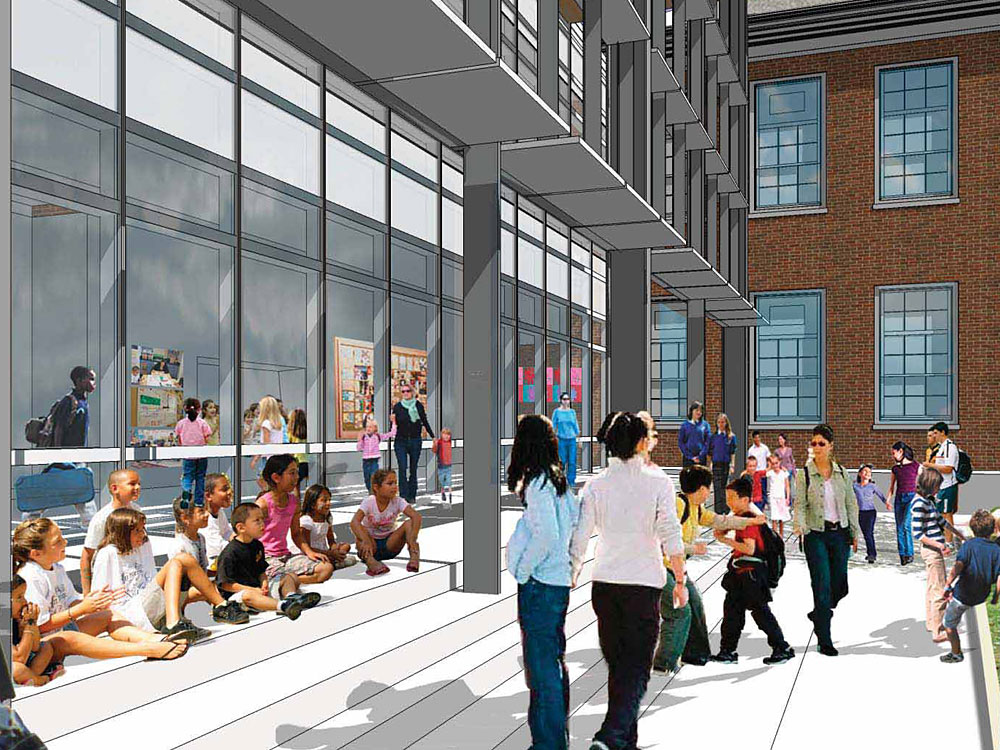 The architect's rendering of the porch of the recently renovated Stoddert Elementary School in Washington, D.C.

"Wherever possible, we have full height partitions and added acoustic blankets and insulation to really keep [noise from] the outside and from room to room" to a minimum, she says.

Indoor air quality is another priority. Rankin says she expects the school's new geothermal heating and cooling system to save a lot of energy.

"Our model shows a savings of around 29 to 30 percent over what a comparable baseline building would be of similar size," she says. "That's 30 percent a year. And payback, for instance, for our geothermal system should be around six to eight years."

This kind of prediction accompanies every LEED project.

But critics of LEED have long said it doesn't put enough emphasis on saving energy. One of the most assertive is Henry Gifford, a New York apartment building owner turned energy efficiency expert.

"It's impossible to go out and buy a building with a guarantee for how much energy it won't use," he says. "And the LEED system, by basing everything on energy predictions, continues that. This is one of the reasons why it's so popular -- because it's painless."

A couple of years ago, Gifford sparked a firestorm by challenging a study funded by the USGBC that concluded that LEED buildings save energy. He says the methodology was flawed and the numbers really show that those LEED buildings used more energy than their peers.

Read Part 1 Of This Report

Other experts say some LEED buildings do perform and others don't. The data are "mixed and anecdotal at this point," said Michele Russo, director of green research for McGraw-Hill Construction.

Gifford's bottom line is that LEED awards certification before the energy savings are proved.

"LEED certification has never depended on actual energy use, and it's not going to," he says. "You can use as much energy as you want and report it and keep your plaque."

Gifford says LEED should have teeth. If the building doesn't perform as predicted, yank the certification. And as for the growing number of governments that require LEED?

At the USGBC's platinum-certified office space in Washington, Fedrizzi walks past the two-story waterfall in the lobby to show off some energy-saving features. Natural light streams in, bouncing off white carpet and ceiling panels to illuminate the workstations. He says the lights are rarely turned on.

When asked about Gifford's charges that LEED doesn't live up to projections, Fedrizzi says ultimately it's not just about the design -- it's about how the building is run.

"What really needs to happen is the transformation of the owners and the operators of the buildings to ensure that the building is being operated properly," he says. "I like to say you can get the same gas mileage out of a Prius that you get from a Hummer if you drive it incorrectly."

Last year, the USGBC unveiled LEED version three. It didn't satisfy Gifford, but many who had dogged the Green Building Council on energy were encouraged. Owners of all new LEED buildings must now tell the USGBC how their buildings are performing for at least five years as part of the "existing buildings program."

LEED certification has never depended on actual energy use, and it's not going to. You can use as much energy as you want and report it and keep your plaque.

Fedrizzi predicts that data will be used to enforce performance in the future.

"Once a LEED plaque is assigned to a building, and there is proof that the building is no longer performing the way that it should, there's a very good chance that that information will then result in the ability for USGBC to remove the certification from the building -- most likely on our website," he says.

Not by removing the plaque. Fedrizzi is walking a tightrope between persuading builders to go green and alienating customers who don't want the performance of their multimillion-dollar projects scrutinized by the public.

And Fedrizzi says sustainability is not only about energy use. He says the program takes a holistic approach and will keep getting tougher.

But should LEED be written into law? Fedrizzi says he supports mandates for schools and for governments who want to green their own buildings.

"We should have green schools in every city and every state across America, without question," he says. "I think what we need is to better understand, when we have these mandates, whether they really serve a purpose. The private sector really benefits more from incentives."

Back at the Stoddert school, architect Rankin says the designers do plan to reveal this building's actual energy use to the students.

The most striking thing about the business of LEED is how the system is being woven into the fabric of the building industry. Even in new buildings that are not LEED these days, many use it as a reference in the project specs. Regardless of the economic downturn, despite questions about performance, LEED is capitalizing on the desire for better buildings and pulling the market toward green.