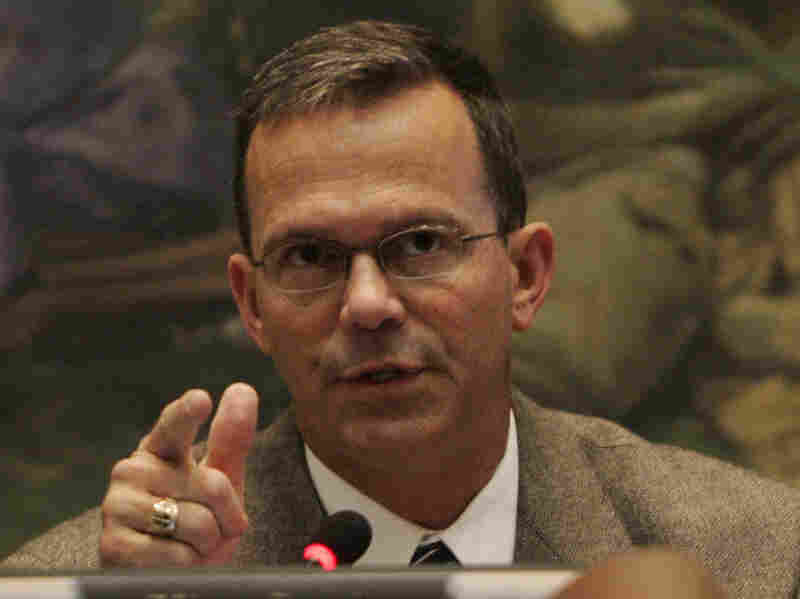 Oklahoma State Rep. Rex Duncan has proposed an amendment to his state's constitution that would ban consideration of any foreign law, including Shariah, in U.S. courts. Anonymous/AP hide caption

Opponents of the Islamic center in New York City raise another specter: They say radical Muslims have a plan to impose Islamic law, known as Shariah, on American citizens. But U.S. courts already accommodate Shariah law, following a long history of incorporating religious laws into the U.S. legal system.

Rex Duncan, a Republican state representative in Oklahoma, agrees with those who say that Shariah is creeping into U.S. courts.

"Creeping is an understatement, it's more like a barrage," he says.

Duncan says he's alarmed that some banks have changed their lending rules to accommodate Islam's prohibition on paying interest. He also cites a recent case in New Jersey, in which a judge refused to give a wife a protective order after her husband repeatedly beat and raped her, saying he had to defer to Shariah law. The decision was overturned by an appellate court, but Duncan wants to make sure that never happens again.

"Any encroachment on the rule of law is unacceptable," he says, "and at some point there will be an outcry at the states that the rule of law be protected. And even at the risk of being accused of being intolerant, we will say no to Shariah law."

Duncan has proposed a state constitutional amendment that would bar U.S. judges from considering Shariah or any foreign law. But that might be problematic: U.S. courts already recognize and enforce Shariah law in everything from commercial contracts to divorce settlements, wills and estates.

Marc Stern, a religion law expert at the American Jewish Committee, says that's no different from how religious laws and customs are already applied.

"And just as the Catholic Church didn't take over law when large numbers of Catholics [came] to the U.S., and Jewish law doesn't govern Jewish citizens, Shariah law is not going to govern, except voluntarily, the rights and responsibilities of Muslim citizens of the United States," Stern says.

He says when there's a conflict, U.S. law always wins. For example, when Orthodox Jews have asked judges to enforce their laws on divorce, the courts have refused to do it; they won't be involved in interpreting religion. In the same way, the government won't enforce Kosher food standards because it would violate the separation of church and state.

Stern says courts will honor agreements made under religious law, but not if they're grossly unfair. In Maryland, for example, a Muslim husband tried to give his wife almost nothing when they divorced, citing Islamic law.

"And in very sharp terms, the Maryland court said, 'This violates our fundamental sense of fairness and our fundamental commitment to equality of women, and we're not going to let you void that by reference to Islamic law,'" Stern says.

"This is an opinion that said, 'What was this judge thinking? This is absolutely and fundamentally wrong. Go back and get it right; this woman is entitled to the full protection of American law, no matter what Islamic law is,'" Stern says.

But Ali Khan, a law professor at Washburn University, sees a scenario where non-Muslims could be governed by Islamic law.

"Right now Islam is expanding in the United States," he says. "Now suppose that Muslims become a majority in a particular state; I think then the state laws would reflect Islamic law."

Khan notes that the heavily Muslim city of Dearborn, Mich., passed an ordinance that allows the call to prayer to be broadcast over loudspeakers. Khan believes that the rapid growth of American Islam means that more towns will enact laws friendly to the religion -- such as banning alcohol or gambling. Of course, Christians have already done that in some cases by creating dry counties or passing blue laws that prohibit shopping on Sunday.

But religious accommodation can go only so far, says Clark Lombardi, a Shariah law expert at the University of Washington. Even if an entire state converted to a "Taliban-esque version of Islam," he says, the courts would not allow it to force women to wear veils, for example -- that would violate their First Amendment rights.

In the meantime, Duncan says, Americans shouldn't take any chances. And he expects his amendment to bar Shariah law will pass easily.