Accessibility links
Giving A Kidney, Gaining A Lifelong Friend Jeff Moyer reflects on the "unsurpassed gratification" he felt after successfully donating his kidney to Julie Stinson, the daughter of a friend. Kidney donation surgery is harder on donors than on recipients, Moyer says.  But while his discomfort will soon end, Stinson will take anti-rejection drugs for years to come. 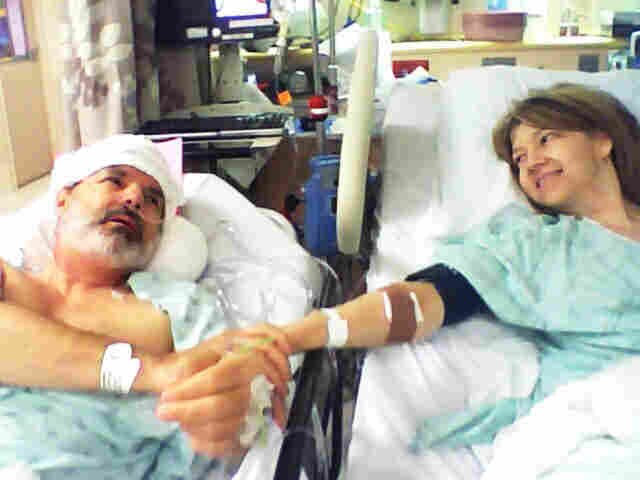 Jeff Moyer and Julie Stinson clasped hands after Moyer donated his kidney to her. A nurse captured the moment with her cell phone camera. Tammy Lambert hide caption

Two weeks after our surgery, when my right kidney became Julie's, I carefully peeled off all my remaining bandages. There they were -- amazing, bright new scars, real battle ribbons. Julie's surgeon noted, and I repeat humbly, that my kidney was a "splendid specimen." It began functioning while Julie was still in surgery.

A few hours later, as I was being moved from post-op to my room, I learned Julie was nearby. Our stretchers were pushed together and Julie clasped my hand. A nurse wept when she saw us and, when I asked, captured the moment with her cell phone camera. I'm blind, so I can't see the picture myself. But I was told that before surgery Julie was pale, but in the post-op photo her cheeks are pink.

The next day, Julie was hooked up to considerably more medical machines than I and required an emergency transfusion. Unaware of Julie's crisis, I lay hot and sticky and itching mightily from a newly discovered morphine allergy. The nurse said I would soon forget the pain. True. I now only remember feeling like I really needed a shower and a few tubes removed.

Earlier this summer, commentator Jeff Moyer talked about the decision to donate a kidney to the daughter of a friend. Read More.

I was genuinely surprised by my leaden fatigue even though the surgeon predicted six to eight weeks for recovery. It would take that long for my sutured stomach muscles to heal. Every day I have less pain, more energy and more restlessness to get back to normal.

Julie's surgical pain diminished even before she went home. Her backache ceased after three weeks, and she resumed driving. She has lost water weight and put good pounds back onto her thin frame. After years of decline, Julie has regained normal kidney function. She went  back to work over a month ago.

Kidney donation surgery is harder on donors than on recipients, and harder on male donors than on female ones. But my discomfort will soon end, while Julie will take anti-rejection meds and diligently protect her donated organ for years to come. Kidney donors usually go on to live normal lives. We learn that we have courage and patience if the healing is slow. And we get to experience this unsurpassed gratification.

Julie and I have become friends for life. We share the thrill of this medical victory and abundant gratitude for the many people who made it possible.

Jeff Moyer is a writer, musician and disability advocate in Cleveland.