Accessibility links
Treating Blindness Takes More Than Meets The Eye Advances in medicine are making it increasingly possible to replace or regrow parts of the eye. But restoring sight may require changes in the brain as well -- and that's much harder to achieve. 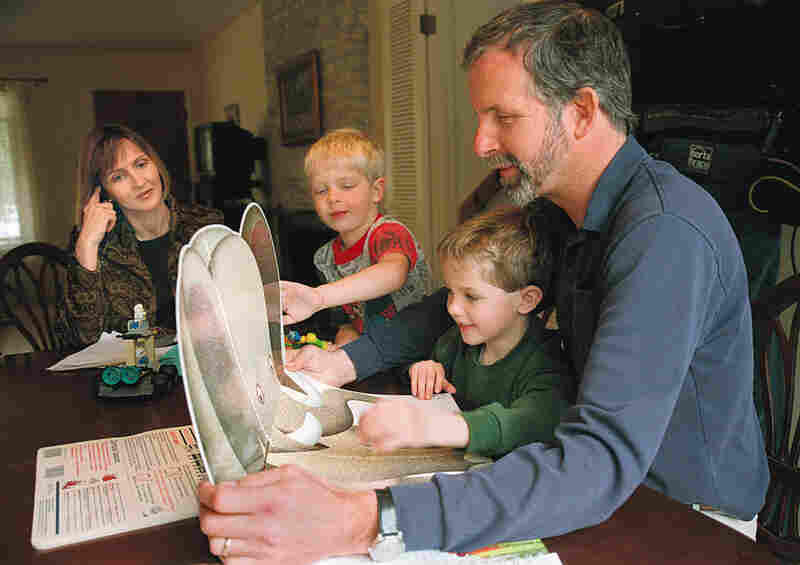 Jennifer May watches her sons Wyndham and Carson introduce children's storybooks to Mike May, after surgeries to correct blindness in one of Mike’s eyes in 2000. Florence Low For NPR hide caption 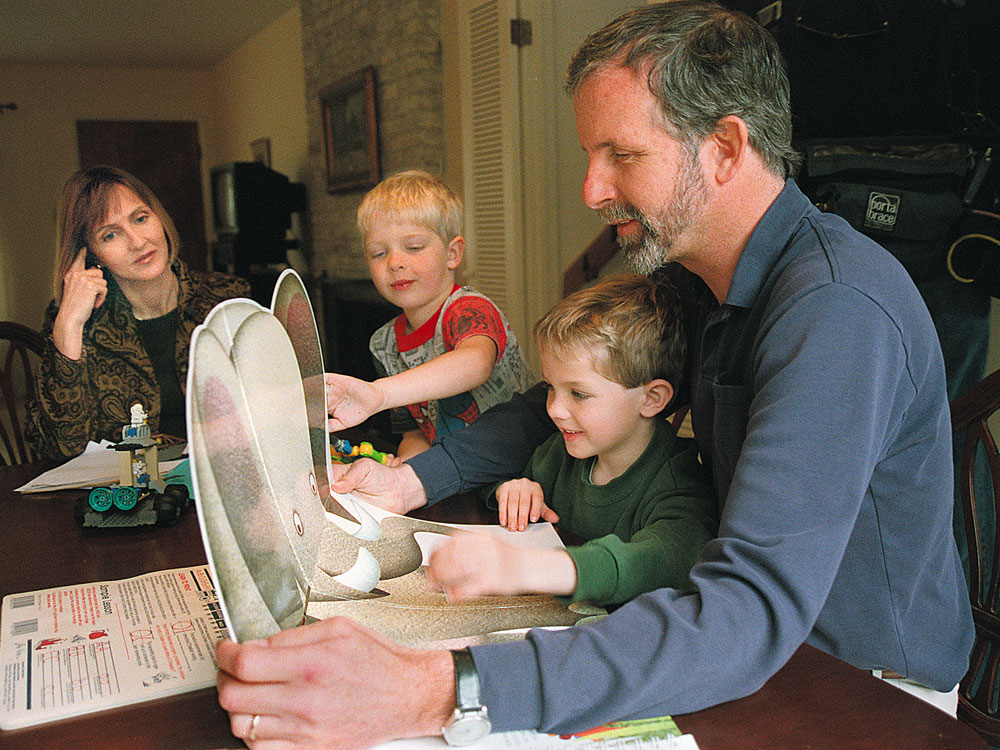 Jennifer May watches her sons Wyndham and Carson introduce children's storybooks to Mike May, after surgeries to correct blindness in one of Mike’s eyes in 2000.

On the day Mike May's bandages came off in March 2000, TV cameras were there to capture the drama. Scientists, the story went, may have finally found a way to cure at least some kinds of blindness.

May went blind when he was just 3 years old when a jar of chemicals exploded in his face. The accident destroyed one of his eyes entirely, and it badly scarred the other. But 43 years later, two surgeries were supposed to bring that vision back. In the first, doctors used stem cells to repair the surface of his surviving eye. Once that healed, they attached a transplanted cornea. May now had a perfectly functioning eye.

May could see the basic outlines of his wife Jennifer's face. But he says it was frustrating because he couldn't really recognize what it was he was seeing.

"I didn't see any details about her face," May says.

I've learned to use my blindness when it's more appropriate, use the sight, use them together.

Ten years later, May still can't see much. He can make out vague shapes and movement, but very little detail. And he has a hard time identifying what it is he does see. Mostly, he functions like a blind person, with a cane and guide dog named Miguel.

"I've learned to use my blindness when it's more appropriate, use the sight, use them together," May says. "And I don't think about it. So people say, 'How's the vision going?' and I think, 'Oh, how is it going?' It's just another tool, like my dog, like my GPS. That's part of the way I operate in the world."

But to scientists who study vision, May's case has posed a powerful question: Why couldn't he see better?

Among the first people to study May after his surgery was Ione Fine, an assistant professor of psychology at the University of Washington. She says it was clear immediately that the problem wasn't in May's eye. It was in his brain.

"It's this fact that his brain hasn't received input for 40 years that's stopping May from seeing," Fine says.

But May had been able to see, once upon a time. So, now that he had a good eye, why couldn't his brain pick up where it left off? That's the subject of a paper published earlier this year in the journal Neuron.

"At the age of 3, kids' vision is pretty good," says author Brian Wandell, who teaches in the psychology department at Stanford University. "They do funny stuff, but they can see a lot of things."

Wandell says that even though a 3-year-old can see OK, his visual system is still taking shape. It hasn't really, as Wandell puts it, locked down yet.

"What's happened at the age of 3 is that a certain class of cells that help you see fine detail -- things like what you might use for reading, or seeing fine patterns or textures -- those cells are just stabilizing," he says. "At 18 months, they're really not in place, but at 3, they seem like they're getting there."

Now, we know that the brains of young children are especially plastic, or malleable. That's why kids pick up language more easily than older people. Wandell says it's a case of brain cells adjusting to meet new demands.

"All the cells that are in your brain as you're developing are kind of in competition with one another for more space -- who gets a little more territory, who gets less," Wandell says.

But after 3-year-old May had his accident, that jostling for space took a different turn.

"In Mike's case, the cells that were his visual cells were disadvantaged because they weren't being driven by the environment," Wandell says. "So, the other cells said, 'Well, listen, I'm doing a lot more business than you're doing, and I'm going to take the space you would have had because I'm just getting a lot more activity.' " 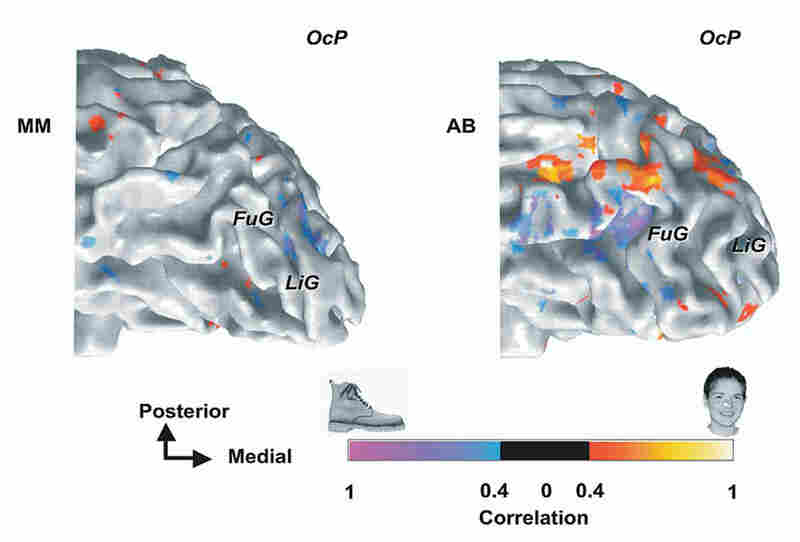 toggle caption
Courtesy of Mike May

Those visual cells that are devoted to fine detail eventually deteriorated. But the damage didn't stop there. Instead, it set off a chain reaction as other parts of May's brain that also depended on visual information suddenly weren't getting it.

"We were worried that when May's eye wasn't producing any signals -- that literally the big cables that would carry the information between his eye and his brain and different parts of his brain would have withered away," Wandell says.

Wandell believes that's exactly what happened. Cut off from a steady stream of images, May's ability to, for instance, recognize faces disappeared. He lost his ability to distinguish between different types of objects.

But at the same time, those cells were being repurposed to do other things, things that are useful to a blind person.

Which is why, at the end of the day, having very limited vision isn't such a big deal to May. He still runs the GPS business he founded, still competes in downhill skiing races.

The lesson here, Wandell says, isn't that doctors should stop trying to cure blindness. It's that for some patients, the cure will have to include the brain as well as the eye. And that may take a bit more doing.