Accessibility links
For-Profit Schools Balk At Stricter Regulations The Department of Education released a proposal last month to tighten rules on how much debt students at for-profit colleges and universities can rack up. The for-profit education business has responded with an aggressive campaign to rally public opinion to its side. 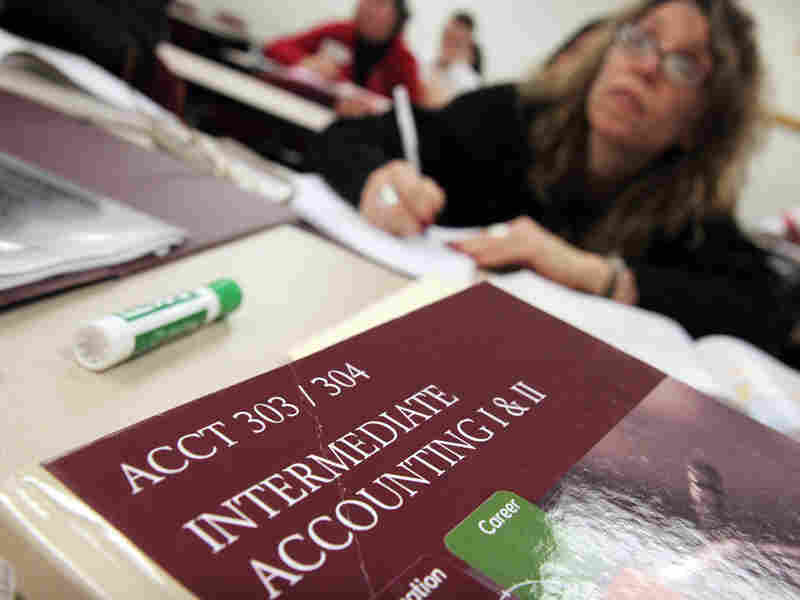 Ceci Giusti listens to a lecture in an accounting class at Strayer University’s Washington, D.C., campus. The Department of Education is proposing stricter guidelines for how much students at for-profit schools can borrow in federally backed loans. Sarah L. Voisin/The Washington Post/Getty Images hide caption 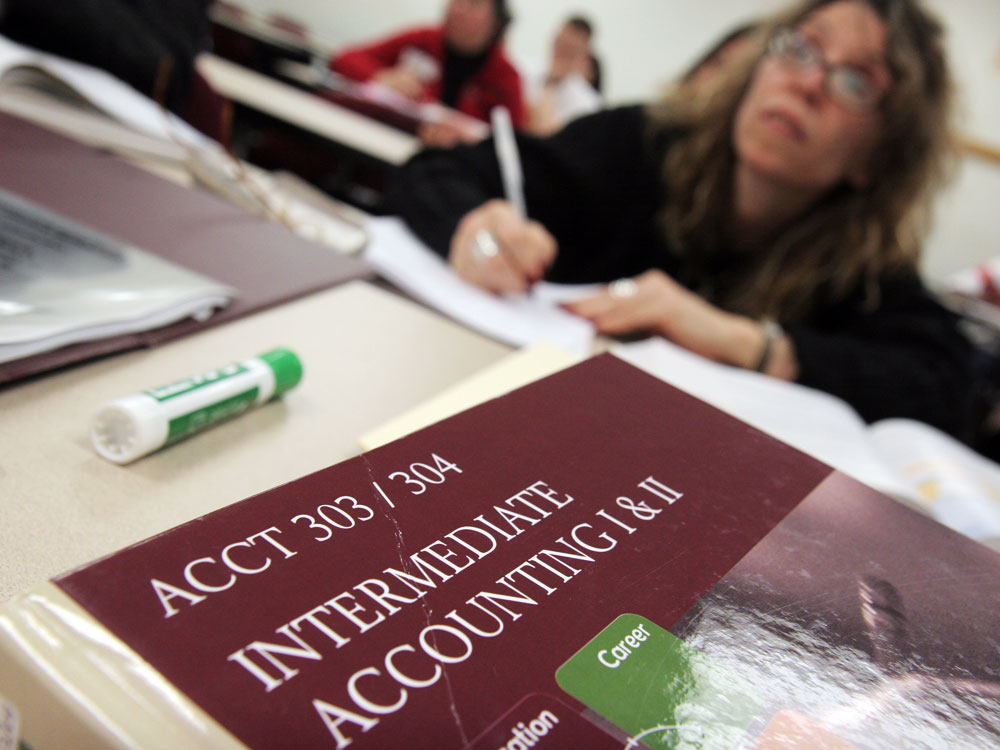 Ceci Giusti listens to a lecture in an accounting class at Strayer University’s Washington, D.C., campus. The Department of Education is proposing stricter guidelines for how much students at for-profit schools can borrow in federally backed loans.

For-profit colleges and universities -- the fastest-growing sector of higher education -- are bracing for a federal crackdown on the cost of a degree.

The Department of Education proposed to tighten rules on just how much debt students at these schools can rack up. Students at for-profits are more likely to get in over their heads than those at not-for-profit schools.

But for-profit schools are fighting hard against the new rule because it would threaten their bottom line.

The proposal the Department of Education released last month would require for-profit schools to ensure that their graduates earn at least enough to start repaying federally backed student loans. If not, the schools would risk losing access to those loans.

Stock prices for the parent companies of the University of Phoenix, Strayer University and others have plunged this year. Investors fear tighter regulation will bring an end to skyrocketing growth.

At the same time, Silber says, there's worry that an improving economy will slow enrollment in disciplines that have steadily added students during the recession.

"You know, certificate nondegree programs -- becoming a medical assistant, etc. -- those folks, if the job market is good, will go right into the job market without this training," he says.

A growing number of traders are betting on a crash in stock prices in the sector. William Duff Gordon of Data Explorers says some companies have become targets for short traders, who hunt for stocks that are expected to fall.

Schools Push Back Against The Government

The for-profit education business has responded with an aggressive campaign to rally public opinion to its side. For-profits have been urging students to write letters to the government during the comment period on the rule.

One company, Education Management Corp., has hired a Washington lobbying firm to mount a campaign against the rule. The company has even offered to cover postage for employees who want to send a letter to the Department of Education. Many companies see this rule as a threat to their survival -- some depend on federally backed student loans for nearly 90 percent of their revenue.

Harris Miller of the Career College Association makes no bones about the fact that his members are urging people to pressure the government. "We think it's not only ethical, but we think it's appropriate and necessary to educate people who might -- and should -- be concerned about this regulation to submit comments," he says.

The for-profit business has also launched its own research institute to try to counteract negative impressions the public has about schools that make a profit.

Miller says the government's own numbers underscore that for-profit education is here to stay -- and can't be treated as some sort of marginal phenomenon.

"The Department of Education released data that showed that our sector has continued to grow overall to the point where we are now about 12 percent of all students in higher education as opposed to 9 1/2 percent the previous year," he says.

Proponents of the new rule say they are not interested in driving for-profits out of business, just in stopping students from borrowing more than they can afford to repay.

Pauline Abernathy of the Institute for College Access and Success says the information campaign shows that this is a high-stakes issue for these companies, enough "that they can hire companies to write comments for students and employees in order to defend the school's access to the federal student aid."

The public comment period on the new regulations ends this week. The impact of the rule on students and for-profit schools won't be clear until the new rule is issued in November.