Accessibility links
Determining 'Brain Age' With A Simple Scan Doctors can easily tell whether a child's body is growing normally. But they have a much harder time assessing the brain. Now, using a new type of MRI scan, they can more accurately determine a child's "brain age" and help identify children with developmental problems. 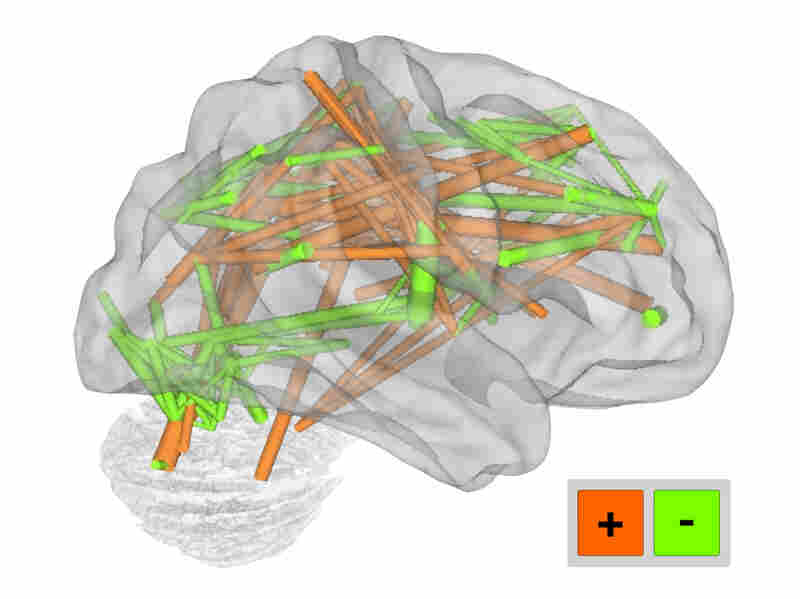 A type of imaging called functional connectivity MRI provides scientists with a new lens for studying brain development. In this image, the thickness of each connection indicates its relative weight in the prediction of brain maturity.  Functional connections that grow stronger with maturation are orange, while those that weaken with maturation are green. Science/AAAS hide caption 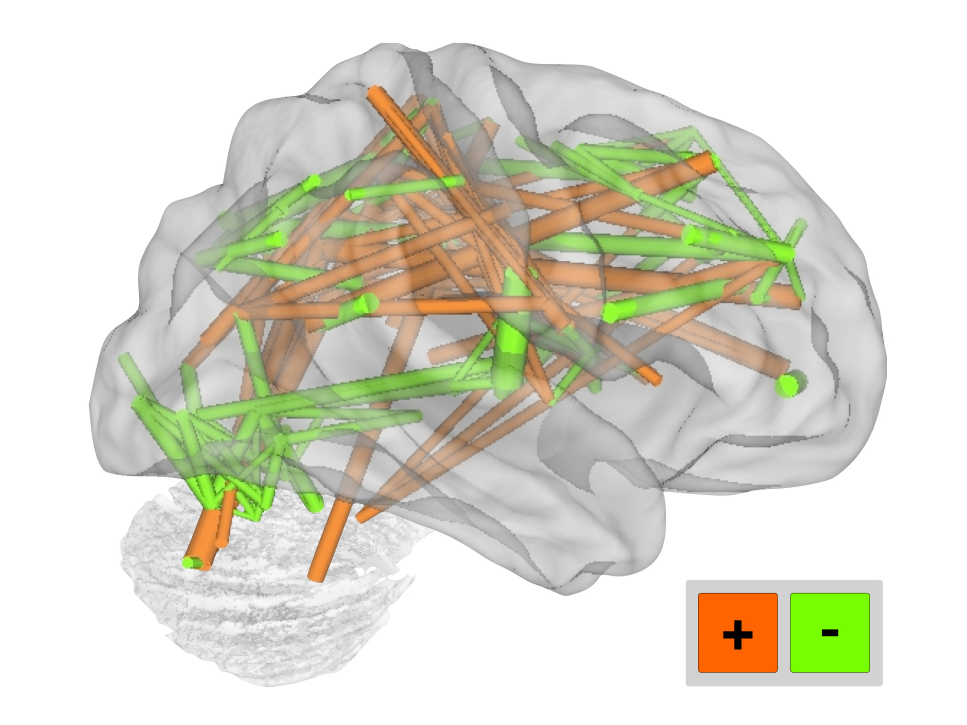 A new type of brain scan could help doctors identify children whose brains are not developing on schedule, and may eventually explain what goes wrong in the brains of children with autism.

The technique, called functional connectivity MRI, shows which parts of the brain are communicating.  That makes it more useful for detecting developmental disorders than traditional MRI, which shows brain structures, says Nico Dosenbach of Washington University in St. Louis.

Many children with severe behavioral or learning problems get traditional MRI, Dosenbach says. But their scans usually appear normal, he says. That's because the problem isn't usually with the brain structures themselves. Instead, the trouble comes from the way those structures are communicating with each other.

In typical kids, he says, certain connections in the brain grow stronger over time, while others are pruned away. But that process seems to get delayed or derailed in children with autism and some other developmental disorders.

So researchers have been testing an approach to brain assessment that relies on functional connectivity MRI.  The scan can be done in about five minutes and doesn't require a child to perform any mental tasks, he says.

"We try to find which parts of the brain preferentially talk to which other parts," he says. "We can sort of map that out, and at the end it sort of spits out a number. You could call it a 'brain age.' "

More On Brain Development From
'The Human Edge'

The brain age scale was derived from scans of more than 200 people between ages 7 and 30, all of whom had typical brain development, according to Dosenbach's study, which appears in the journal Science.

The approach should help spot problems with brain development, he says.

For example, if a child's connectivity scan shows a brain age of 8 but his or her chronological age is 15, "you'd probably start to worry that maybe something isn't going right," he says

Other scientists say the technique may be especially important for understanding autism.

"In many respects, the brain of a child or adolescent with autism looks somewhat immature," says Ralph-Axel Muller, a psychologist who has used functional connectivity MRI to study autism at San Diego State University.

Those studies show that important connections in the brains of children with autism are a bit weaker than in typical children, Muller says. But the scans also show that their brains retain a lot of extra connections -- the type that usually get pruned away.

The important networks don't function as well because "there are these abnormal retained connections all over the place," Muller says.

It's still not clear whether functional connectivity scans will be able to spot signs of trouble in infants, whose brain networks have just begun to develop, Muller says. But the technique may finally offer scientists a better way to study autism in older children.

"I think functional connectivity can tell us a lot about the brain mechanisms that ultimately explain why children and adolescents with autism behave in the way they do," Muller says.