Accessibility links
Essayist: Before Burning Quran, Know What's In It Commentator Anisa Mehdi has a proposition for anyone threatening to burn Islam's holy book: Try opening it up. Christians might even find some of the references to Jesus and the Virgin Mary familiar. Mehdi says both the Rev. Terry Jones and the Muslim community could benefit from the lessons of the Quran.

Essayist: Before Burning Quran, Know What's In It

Essayist: Before Burning Quran, Know What's In It 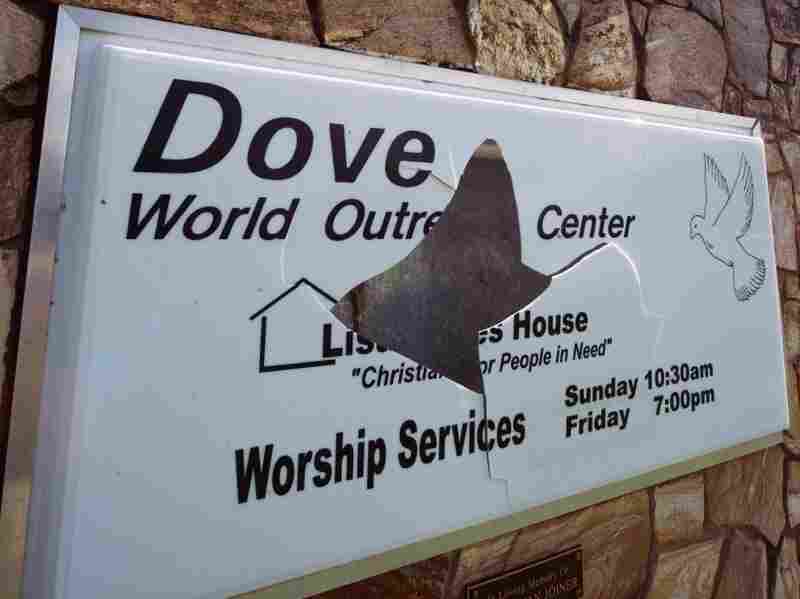 A vandalized sign at the Dove World Outreach Center in Gainesville, Fla., where Pastor Terry Jones was planning to burn copies of the Quran on the ninth anniversary of the Sept. 11 terrorist attacks. Paul J. Richards/AFP/Getty Images hide caption

An outcry from Muslim communities around the world greeted Florida Pastor Terry Jones' announcement that he would commemorate the Sept. 11, 2001, terrorist attacks by burning copies of the Quran. The outrage was matched only by those who staunchly oppose the building of an Islamic cultural center near ground zero in New York City.

President Obama, Defense Secretary Robert Gates and Gen. David Petraeus all urged the pastor to call off the event, citing potential threats to Americans overseas. In a late afternoon press conference, Jones said he had canceled the protest in exchange for a deal to move the proposed Islamic center away from ground zero. But Feisal Abdul Rauf, the imam planning the center, quickly said no such deal had been made.

Anisa Mehdi is a Fulbright Scholar and filmmaker who directed the National Geographic documentary Inside Mecca.

Here’s a quick test of your knowledge of scripture.  Where does the following passage come from?

“Behold, the angels said, “O Mary, God announces good news to you by a Word from God named the Messiah, Jesus son of Mary, honored in this world and the hereafter.”

The first from the King James Version of the Bible and the second from the Revised Standard?

No on both accounts.

These are passages from the Quran. The first in English translation by Yusuf Ali and the second by Thomas Cleary. As an English-speaking Muslim, I have several versions of the Quran in English.

The Quran, the holy book of Islam, gets quoted for exhortations to fight for the faith. “Those who believe fight in the cause of God, and those who reject faith fight in the cause of Evil.” But it’s also filled with reverent passages about Jesus Christ.  There is a whole chapter named for his mother, Mary, who is mentioned more often in the Quran than she is in the Bible itself.

And this is the book the Rev. Terry Jones threatened to burn at his Dove World Outreach Center in Gainsville, Fla., on Saturday?

Did he know what he would be burning?

The Rev. Jones may reject much of what he believes is so about Islam.  He may reject the notion that another prophet came to humankind after Jesus.  He may resent Islam’s fierce adherence to One God and not a Trinity. He may -- and rightly so -- despise the acts of terror committed in the name of Islam. But he should know that the book he hopes to burn as a statement of protest and rage holds his Savior in the highest esteem.

“And in the footsteps of the prophets we send Jesus, the son of Mary, confirming the law that had come before him. We sent him the Gospel. Therein was Guidance and Light.”

The Quran tells about miracles performed by Jesus -- some unfamiliar to the Bible, like talking when he was a baby and breathing life into a clay bird, but also recognizable miracles, like healing lepers and restoring the dead to life.

The chapter of Mary also tells stories of Abraham, Moses and Noah. Surely these are figures of prominence in the Christianity of the Dove World Outreach Center.

But the crisis around burning the Quran was not one-sided. It may have been instigated in Florida but hostile reactions were predicted in Afghanistan by U.S. Gen. David Petraeus and who knows where else. After all, there is a history of violent reaction by Muslim people to perceived offenses against their faith.  Remember the Danish cartoons?

So there is another group of people who need to know better just what’s in the book at the center of this story.

We are now celebrating the end of the month of Ramadan.  Muslims showed self-discipline by fasting from dawn until dusk for 30 days in a row.  This is a time to put that self-control into action.

In Chapter Five, the Table, we read, “O Believers! Stand up as witnesses for God by righteousness and let not ill will at any induce you not to act uprightly.  Act uprightly … And fear ye God. God is apprised of what ye do.”

“Killing is bad,” the book goes on to say,” but lawlessness is even worse than carnage.”

Just like the Bible, the Quran has its share of passages about punishment and vengeance.  No doubt I’ll be accused of only choosing the soft, sweet lines out of context for the purpose of making a point.

But it’s a point that needs to be made as much as the point that has been made that burning the Quran is NOT a good idea.  That the challenge for Muslims in this trying situation is to behave and perform as cited in the very book they said they were trying to save.