Accessibility links
State Budget Gaps: Debt Holes Deepen States have cut spending and raised taxes to deal with growing deficits. The nation's smallest state, Rhode Island, has the most debt. In Illinois, a state representative was evicted from her district office for late rent payments. Even Tennessee, the state with the lowest total debt, is borrowing.

There has been much talk about the federal government's sorry fiscal state and how that might affect the upcoming debate on the expiring tax cuts made under President Bush. But the states are broke too, many struggling with billion-dollar budget gaps, so they have slashed spending and raised taxes. And many have gone deeply into debt.

The nation's smallest state, Rhode Island, is not an exception to state debt difficulties.

A sign at the Budlong swimming pool in Cranston, R.I., says "no pushing and no running." As it turns out, there was no swimming for the 2010 summer either. That’s because Cranston didn’t have the funds to keep this facility, the city’s only public pool, open. 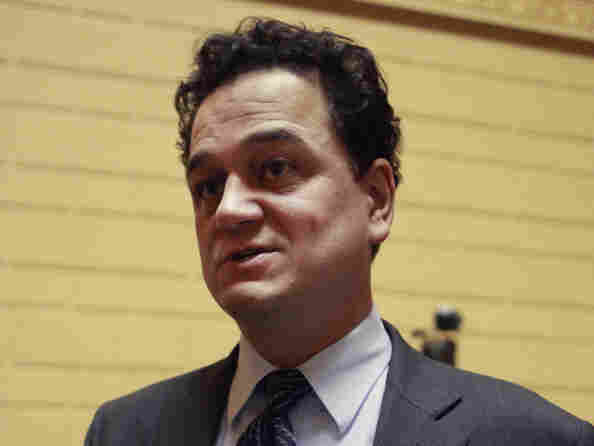 Democratic House Speaker Gordon Fox of Rhode Island says his state should stand out for lowering taxes while other states raise them during these hard economic times. Rhode Island is the most indebted state in the U.S. Steven Senne/AP hide caption

"This is only the third time in its history that it has been closed. And it’s sad to say that many of the kids in this hot summer had to go without that city resource," Cranston Mayor Allan Fung says.

The city's unemployment rate is around 12 percent -- just as it is in the rest of the state. Keeping the public pool closed is just one of the many tough decisions Fung has been forced to make.

"We’ve had to reduce library hours. Senior centers have taken cuts. I’ve tried to balance the pain in every single department," Fung says.

The city has also cut the number of firefighters and police and raised taxes on cars. All this is a result of a severe fiscal crisis in the state. Years of spending and borrowing have made Rhode Island the nation’s most indebted state, according to the Center for Budget and Policy Priorities. Rhode Island has also been trying to shed its reputation as anti-business. So this past year lawmakers, including Democratic House Speaker Gordon Fox, were in no mood to raise taxes.

"Where most states in terms of getting out of these economic bad hard times, if you will, have been raising taxes, Rhode Island should be known on the map because we’re looking to decrease taxes," Fox says.

Which is what lawmakers did: They cut taxes for the state’s highest earners. And to help close a $570 million deficit, they slashed tens of millions of dollars in local aid, forcing cities and towns to cut services. Some of them have even shut off their street lights. Scott Avedisian, the mayor of Warwick, R.I., knows how the local governments have been affected.

"What we’re really seeing is a total abdication of the state’s policies down to the local level, and say, 'You know what, you're going to have to go out there and deal with it,' " Avedisian says.

But Maureen Moakley, a political science professor at the University of Rhode Island, says state lawmakers did what they had to do. "The traditional pattern was municipalities would spend, would overcommit, and then the state would bail them out. That’s over," she says.

Moakley says for years Rhode Island has talked about the need to consolidate and regionalize local services. Now municipal leaders might have no choice but to finally do that.

In Illinois, things aren't any better than Rhode Island -- and actually might be worse.

Take, for example, the predicament state Rep. Sandy Cole is in.

With the help of her son, some of his friends and her staff person, the Republican from the northern Chicago suburb of Grayslake has spent much of past couple of weeks packing up her belongings from her district office. She's moving, in the middle of her term, into new quarters because her former landlord evicted her.

She says the landlord "couldn't wait for the state to pay the bills. They [the state] were about 90 days to 150 days in arrears in paying the bills and he called in his month-to-month lease."

She hopes the same thing doesn't happen with her new landlord. 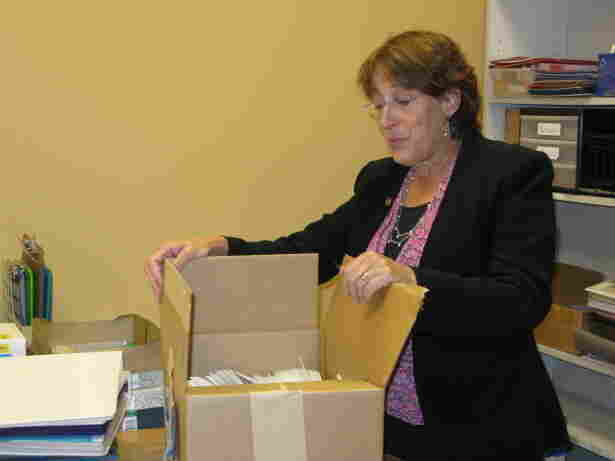 Illinois State Rep. Sandy Cole unpacks boxes and arranges her new district office, after being evicted from her longtime office because the state fell so far behind in paying the rent. David Schaper/NPR hide caption

And it's not just landlords who are left hanging: Illinois is months behind in paying providers of critical services, from doctors and hospitals serving patients on Medicaid to the social service agencies that care for the disabled, the homeless and the mentally ill. Illinois is also several months behind in delivering state aid to schools, universities, cities, towns and transit agencies, among others.

When the state catches up, Cole says it might pay several months in back rent all at once, plus interest to the landlord. But to make up the shortfall, Illinois isn't raising taxes or cutting spending; it's borrowing billions.

"[It's] crazy. It's just not good fiscal management," Cole says. "It doesn't make sense to us, and it shouldn't because it's not how you would manage your home."

"The financial condition of the state of Illinois is a fiscal train wreck," says Laurence Msall, president of the Civic Federation, a Chicago-based nonpartisan, not-for-profit group that analyzes and researches state and local government budgets.

He says Illinois' fiscal problems are not simply the result of a bad economy.

"The state's train wreck is caused by inaction and dereliction of duty in Springfield; the failure to provide a balanced budget," Msall says, adding that Illinois' last two governors and the Democratic-controlled state Legislature haven't cut spending to match declining revenues. In fact, he says, they keep spending more.

They've been relying on borrowing money to meet the state's pension obligations, for capital projects, and just to pay rent and other government operating costs. The state has been borrowing so much in recent years that credit agencies keep downgrading its bond rating. One agency has cut the state's rating four times in the past 17 months. Illinois now has the lowest rating among all 50 states, just barely above junk bond status.

Illinois has borrowed a whopping $9.6 billion in just the past 12 months. A report released Aug. 30 by Msall's Civic Federation projects that because of the state's dropping bond rating, borrowing that $9.6 billion will eventually cost Illinois taxpayers $551 million in extra interest payments.

"That's $551 million that's not going to be available for schools, for public safety, for public transit," and other needs, Msall says.

"And there is no recognition right now that the state knows how to get its fiscal house back on track," he adds. "It is almost as if it thinks by ignoring the fact that it is being charged these enormous costs in borrowing, by not paying its bills, and not balancing its budget, that those problems will somehow go away.

"It’s an alternative reality … a train wreck that will get worse."

Tennessee: Good Credit, For How Long?

Unlike Rhode Island and Illinois, Tennessee has done a decent job maintaining fiscal stability. In fact, people are pretty proud of a recent ranking. Of the 50 states and Washington, D.C., Tennessee places 51st in total debt.

"This obviously puts us in the best position," Tennessee Gov. Phil Bredesen says.

Bredesen says a long tradition of using cash instead of credit has muffled the compounded effects of lower tax revenues. Tennessee has even paid cash for roads and college buildings, when borrowing is the norm.

"We're going to conduct our business and not get on to the slippery slope of starting to take a bunch of these things and see how easy it is to pass things off to the future," Bredesen says.

But Tennessee has taken at least one small step onto that slippery credit slope.

The state has plans to rehabilitate 200 aging bridges over the next few years. To accelerate the building spree, the state is using bonds to fund construction. It's not become a habit here, but that kind of borrowing has gotten some states in trouble. 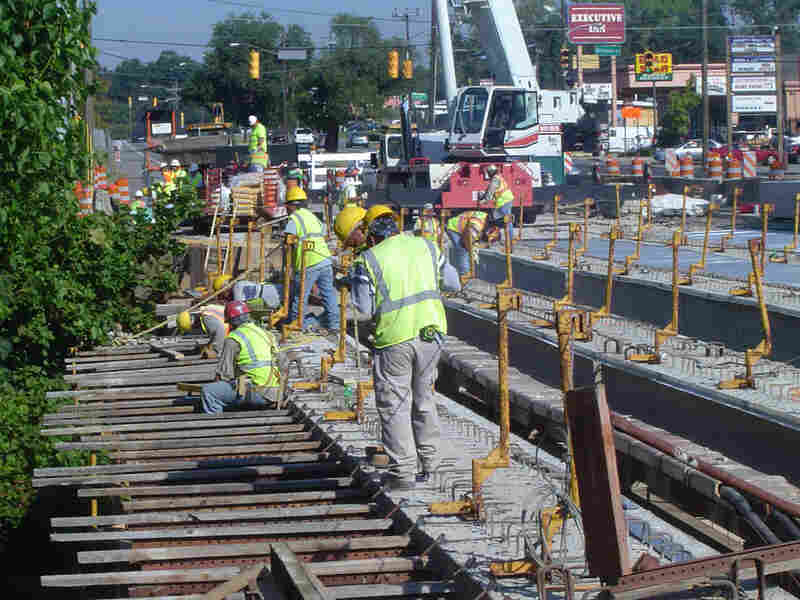 Workers replace a bridge over Mill Creek in Nashville, Tenn., as part of a statewide project to rehabilitate 200 bridges paid for with bonds. Tennessee is now borrowing money to do roadwork and repair bridges, against a pay-as-you-go tradition. Blake Farmer for NPR hide caption 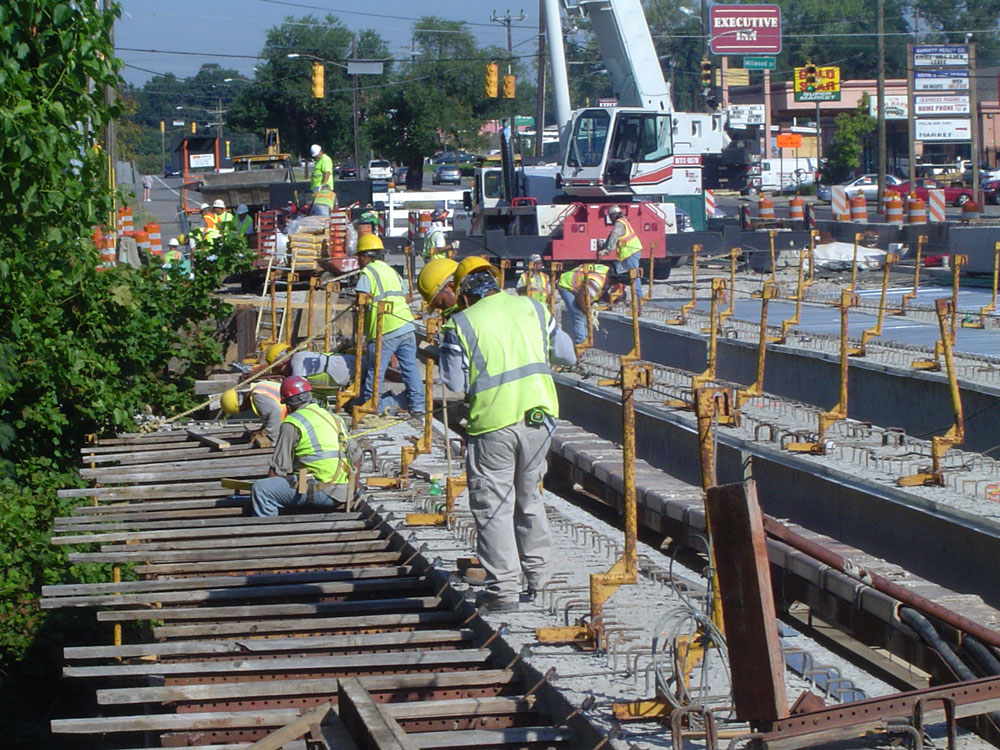 Workers replace a bridge over Mill Creek in Nashville, Tenn., as part of a statewide project to rehabilitate 200 bridges paid for with bonds. Tennessee is now borrowing money to do roadwork and repair bridges, against a pay-as-you-go tradition.

Tennessee has trimmed costs and dipped into savings to get by. But deeper cuts are coming. For example, drug and alcohol clinics like Buffalo Valley Inc. will lose their funding next year if state revenues don’t pick up.

Deborah Hillin, Buffalo Valley's housing director, says the clinic's four locations "would be cut down to one or two. It causes another economic issue because now I've got to lay people off."

At least 75 employees would lose their jobs, she says. And that’s just one agency contract with one state department.

With the coming end of stimulus funding and no meaningful turnaround in tax revenue, even thrifty Tennessee may be tempted to pull out the credit card a little more often.