Accessibility links
Claims Czar's Slow Pace Frustrates Gulf Coast Businesses It's been almost three weeks since Kenneth Feinberg took over the claims payment process for the oil spill. Residents and businesses along the Gulf Coast are still waiting, in frustration and often in desperation, for claims to be paid out. 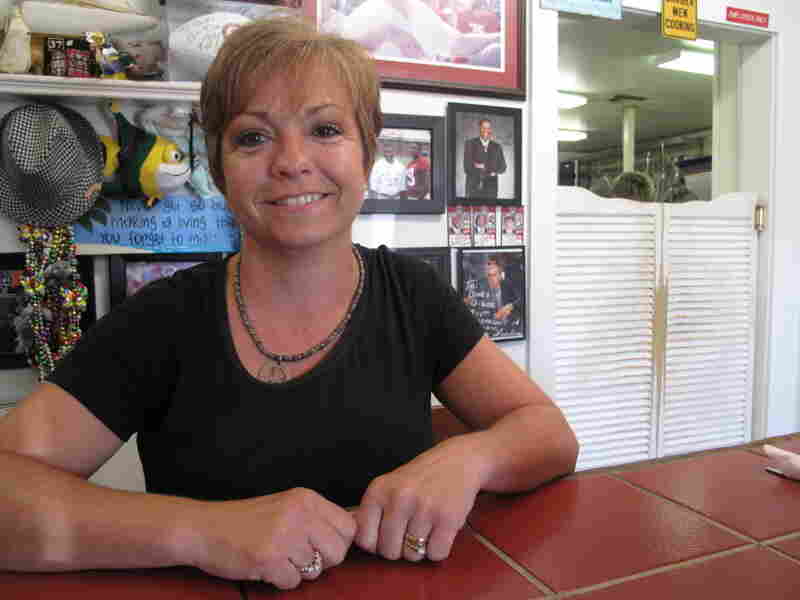 Rhonda Drummond owns Dick’s Diner in Orange Beach, Ala., where tourism has fallen flat since the BP oil spill. After filing for $120,000 with claims czar Kenneth Feinberg, the restaurant received a $4,500 emergency payment to stay afloat for the next six months. Now she's facing bankruptcy. Debbie Elliott/NPR hide caption

People living on the Gulf Coast who have lost money because of the oil spill had put a lot of hope in attorney Kenneth Feinberg, the new claims czar appointed by the federal government. But nearly three weeks after he took over the payment process from BP, many residents are still waiting -- in frustration and often in desperation.

After being shuffled through nine BP claims adjusters, and having to resubmit tax records three times, Rhonda Drummond was ready for the switch on Aug. 23.

"We waited patiently until Feinberg took over," she says. "I was at the office at 8 o'clock."

Drummond owns Duck's Diner in the resort town of Orange Beach, Ala. Her husband and one son cook; another son waits tables; and, when she's not fixing the squash and mashed potatoes for the lunch special, Drummond is up front greeting customers -- the few she still has.

The restaurant lost $45,000 this summer and got $15,000 of it back from BP. That's why Drummond was looking forward to Feinberg taking over: The diner filed for $120,000 to stay afloat through January.

"They insulted my family by sending us $4,500," Drummond says. "They gave my servers more than they gave our business."

That $4,500 check makes BP's $15,000 payment look good in comparison -- even though it was a fraction of the diner's losses. Now the new claims process does not allow appeals of the emergency payment, so Drummond isn't sure what to do next.

"We can file the final claim, give up all right to sue," Drummond says. "Or we can retain an attorney. Or we can file bankruptcy and walk away from it all. As a mother, how do you make that decision?"

Businesses all along the Gulf Coast are struggling with similar choices after a summer season that was a bust because of the BP oil spill.

Feinberg had promised a quick turnaround -- individuals with even minimal documentation would get a six-month emergency payment within 48 hours of a claim; businesses would get paid in a week. It sounded like a lifeline for those on the brink.

"We have moved home," Newman says. "We've closed our office. We've had to cut our salaries. We're just barely making it."

About a month ago, they described for NPR their fight with BP. Now the fight is with Feinberg's Gulf Coast Claims Facility.

"We're going broke. We have no money," Newman says. "So the seven days meant a lot to us. Every day it's like 'please let that check come in,' but you check and we're still under review."

"The frustration is understandable," says Feinberg, who will be in Alabama, Florida and Louisiana next week to explain the delays. He says the facility is processing about a thousand claims a day.

"The problems are enormous," he says -- problems like duplicate claims, or no proof of lost income.

Still, Feinberg admits that he promised more than he has been able to deliver given the complexity and sheer volume of claims.

"It's taken longer than I thought," Feinberg says. "And that criticism, the false expectations that have been raised, I think are justifiable."

Diner owner Rhonda Drummond says she can't wait any longer for the process to work.

"I just want what's rightfully due me -- what I would have done, what my family would have made if they hadn't messed it up for us," she says.

You can't treat people like this -- we live in America, she says.