Accessibility links
California Gas Blast 'Looked Like Hell On Earth' Firefighters fully contained the blaze ignited after a gas line ruptured and a massive fireball engulfed a Northern California neighborhood. At least four people were killed and more than 170 homes were damaged or destroyed.

Four people have been confirmed dead in the Thursday night blast. Authorities still need to search about a quarter of the homes in the affected area of San Bruno.

Fire Chief Dennis Haag says some parts are still too hot to search. Homes continued to smolder Friday afternoon. Police have cordoned off the burn areas, saying they are treating  it like a crime scene until investigators can determine a cause of the explosion.

You heard this bang. And everything shook except the floor, so we knew it wasn't an earthquake. I feel helpless that I can't do anything. I just gotta sit by and watch.

The explosion left a giant crater and shot a tower of fire into the air, sending residents fleeing for safety and rushing to get belongings out of burning homes, witnesses said. Hundreds of people evacuated their homes and spent the night in a shelter.

Flames reaching as high as 100 feet tore across several suburban blocks, leaving some in total ruins and reducing parked automobiles to burned-out hulks. Haag said 53 homes were destroyed and an additional 120 were damaged.

San Mateo Senior Deputy Coroner Michelle Rippy said Friday that officials at the scene confirmed at least four deaths. A 44-year-old woman and her young
daughter were among those feared dead.

Authorities said there could be other casualties but the fire and darkness blocked them from checking.

At a news conference, California Lt. Gov. Able Maldonado confirmed the four deaths. He said 52 people had been hospitalized, including three with critical burns. Four of the 52 are firefighters. 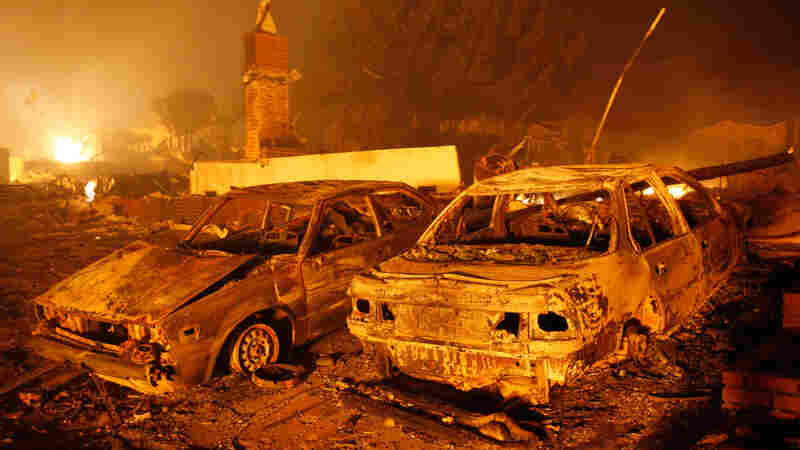 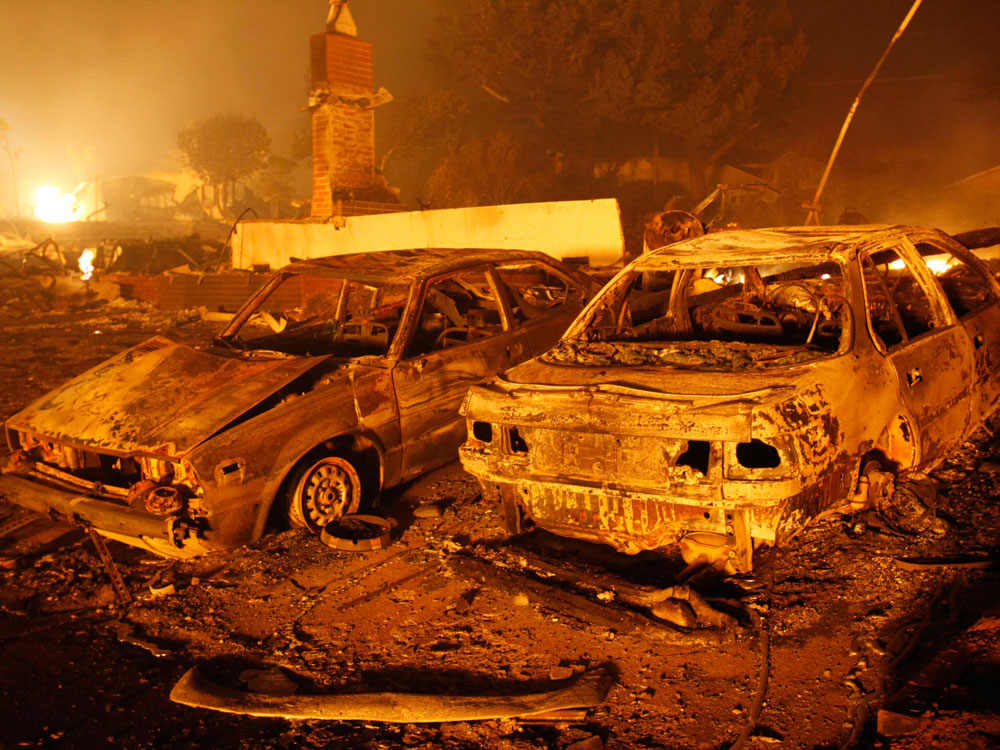 A massive explosion sent flames through a mostly residential neighborhood in San Bruno, Calif. Cars and homes were destroyed in the fatal fire.

Maldonado, acting governor while Gov. Arnold Schwarzenegger visits Asia on a trade mission, said 15 acres surrounding the blast had been engulfed in flames and that part of the fire had not yet been contained.

He said 38 structures had been destroyed and seven damaged. Those figures contrast with the earlier statement from San Bruno's Fire Chief Haag.

Maldonado declared a state of emergency in San Mateo County. He said the Federal Emergency Management Agency had approved a fire management assistance grant to the city. 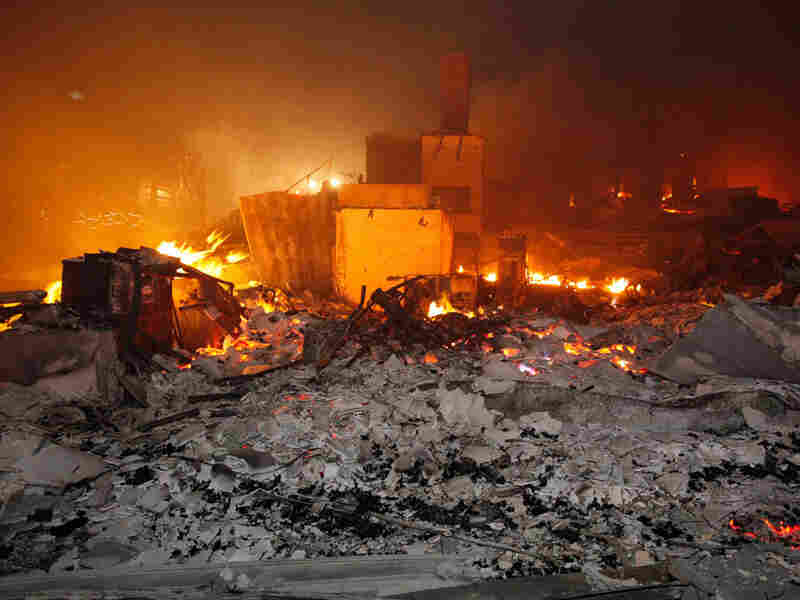 A home destroyed in the fatal fire in San Bruno, Calif. The utility company that serves the San Francisco Bay Area said one of its gas lines ruptured in the vicinity of the blast. Paul Sakuma/AP hide caption 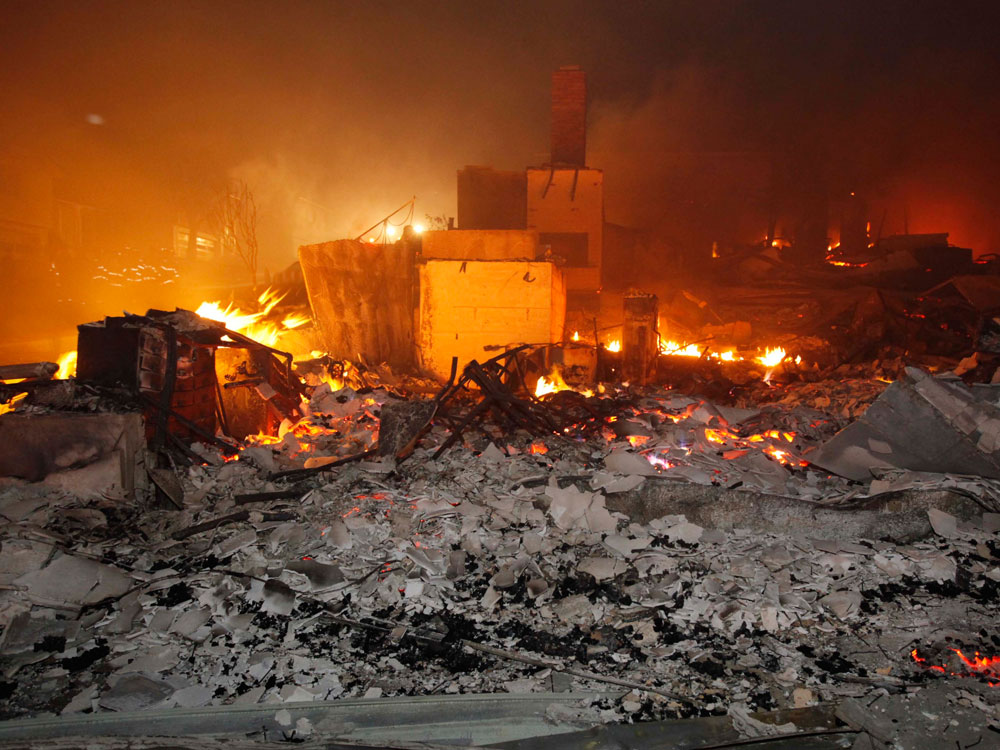 A home destroyed in the fatal fire in San Bruno, Calif. The utility company that serves the San Francisco Bay Area said one of its gas lines ruptured in the vicinity of the blast.

"This is a terrible tragedy," said San Bruno Mayor Jim Ruane. "This is going to be a long haul for the city and all of our residents for a number of weeks to come. I would ask anyone who sees this broadcast tonight to say a special prayer for those people."

The National Transportation Safety Board, whose duties include investigating pipeline accidents, said Friday that it has sent a four-member team to San Bruno to look into the disaster.

Pacific Gas and Electric, the local utility company, confirmed that a broken gas line triggered the blast around 6 p.m. PT. The utility’s president, Chris Johns said Friday that a 30-inch gas pipe had ruptured about three feet underground but that crews still had not been able to determine the exact cause. He said the company has no record of crews working in the area at the time and that he had not heard any reports that residents smelled gas in the days prior to the explosion.

"If it is ultimately determined that we were responsible for the cause of the incident, we will take accountability," Pacific Gas and Electric Co. said in an e-mailed statement Thursday evening.

San Bruno Fire Capt. Charlie Barringer said the neighborhood was engulfed by the time firefighters arrived, even though the fire station was only a few blocks away. He said the blast took out the entire water system, forcing firefighters to pump water from more than two miles away.

Firefighters initially had trouble getting close enough to the ruptured gas line to shut it down because of the flames, Haag said.

Residents Bob Pellegrini and his brother Ed tried to escape out their front door immediately after the blast, but it was too hot. Instead, they ran out the back door and up a hill. It felt like a blowtorch on the back of their necks as they escaped, the brothers told The Oakland Times.

"It looked like hell on earth. I have never seen a ball of fire that huge," Bob Pellegrini said.

Then they saw that their house and four cars had been destroyed in the fire.

"I have nothing. Everything is gone. We're homeless," Ed Pellegrini said.

At a nearby temporary shelter for victims of the blast set up by the Red Cross, KQED reporter Peter Jon Schuler said about 100 people had signed in so that friends and relatives would know their whereabouts. He said about 12 people stayed overnight at the shelter, where volunteers were sorting clothes and preparing food for anyone in need.

But later Thursday, the company's president, Christopher Johns, said he didn't know what sparked the explosion.

"I don't have any details about if there was any work going on," Johns told KTVU-TV. "That will be part of the investigation as we go forward."

Scott Shafer of KQED reported that the neighborhood is beneath a flight path to and from San Francisco International Airport and that a number of witnesses initially thought a plane had crashed.

"Several people thought that the magnitude of the explosion and the size of the flames could only mean that it was an airplane that had gone down," he said.

Jane Porcelli, 62, said she lives on a hill above where the fire was centered. She said she thought she heard a plane overhead with a struggling engine. "And then you heard this bang. And everything shook except the floor, so we knew it wasn't an earthquake," Porcelli said. "I feel helpless that I can't do anything. I just gotta sit by and watch."

Judy and Frank Serrsseque were walking down a hill away from the flames with a makeshift wagon carrying important documents, medication and three cats.

Judy Serrsseque said she heard an explosion, saw that fire was headed toward their home and knew they had to leave. As they fled, they said, they saw people burned and people struggling to get their things out of burning houses.

"We got everything together, and we just got out," Judy Serrsseque said. "Mostly we're wondering if we have a house to go back to."