Accessibility links
Mutiny, Firings Roil Mexico's Federal Police The Mexican federal police announced last week that it was firing 10 percent of the force as unfit for duty. A recent protest in Juarez, where police officers accused their commanders of cooperating with drug cartels, provides insight into troubles plaguing the force, including allegations of corruption. 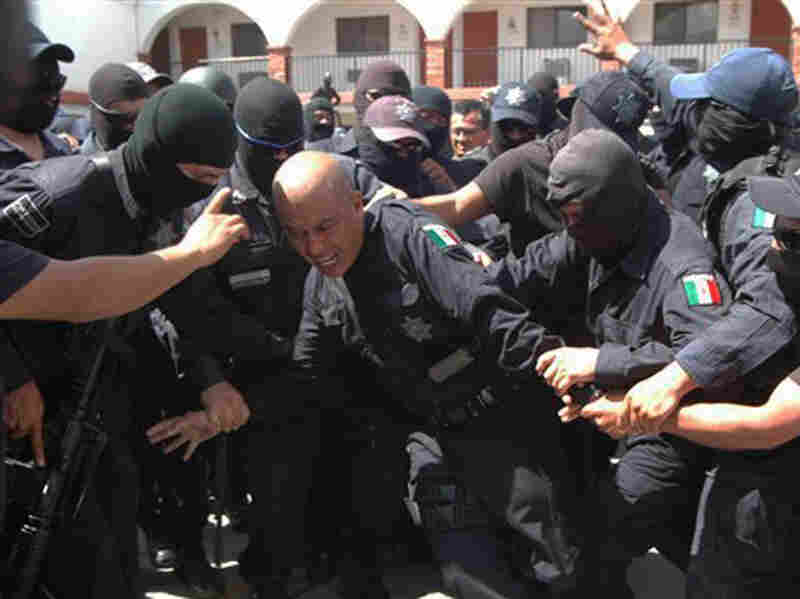 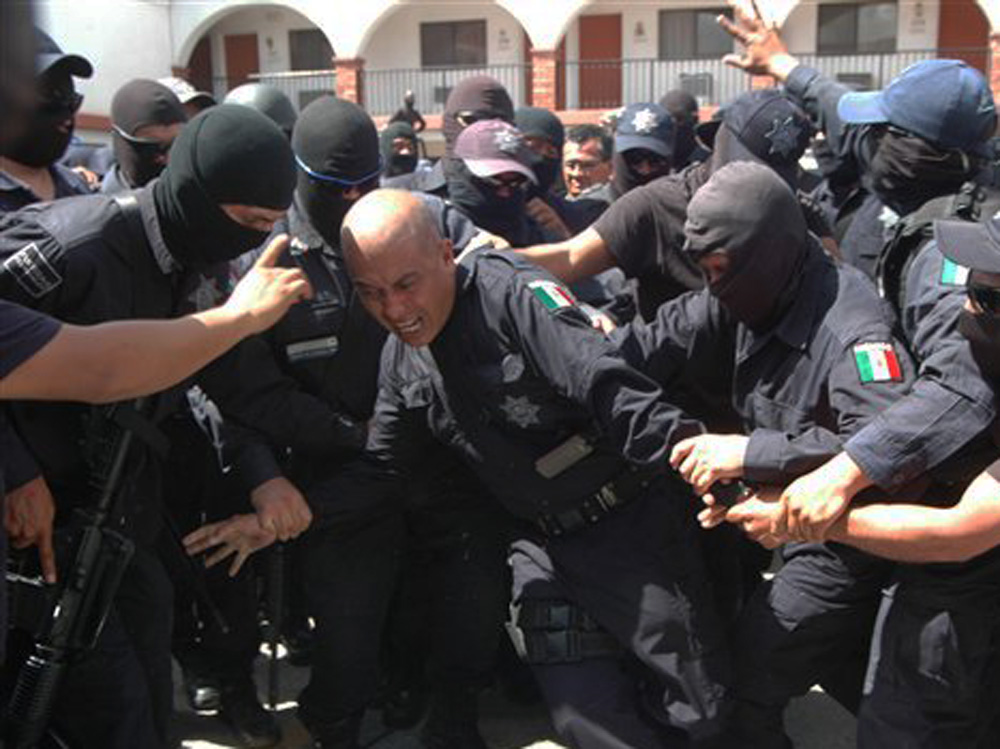 The Mexican federal police announced last week that it was firing 3,200 officers -- or 10 percent of the national force -- as unfit for duty as Mexico struggles to wage its war on drug cartels.

The violent border city of Juarez provides some insight into the troubles besetting the national police force. Recently, hundreds of federal cops took to the streets of Ciudad Juarez in an extraordinary demonstration to accuse their commanders of corruption and colluding with the criminals they are supposed to be fighting.

The images were striking, even in this embattled city of Mexico's savage cartel war. On Aug. 7, some 250 irate blue-uniformed federal cops gathered in the parking lot of the hotel where they live and began punching their comandantes on live TV.

The protesting cops told TV cameras their commanders were forcing the rank and file to extort common citizens, and if the officers resisted, they were framed for bogus drug crimes.

“We’re not all thieves; we’re not all corrupt,” a policeman in a ski mask told a cameraman. “There are those of us who like our work.”

The federal police were supposed to be the cavalry that rode into Juarez last April to restore law and order.

They replaced the disastrous deployment of the Mexican army in Juarez. For the past two years, homicides soared, as did human rights abuses by the military.

Late last week, the State Department said it was withholding $26 million of U.S. security aid to Mexico, until that country does more to investigate and prosecute human rights crimes by its security forces.

There was a major conflict between the dirty police and the officers who were losing their lives.

It appears the federal police have continued the misconduct of the soldiers they replaced. Since May, 50 of 60 complaints received by the Chihuahua State Human Rights Commission for abuse of authority are against the federal police for theft, extortion, kidnapping and murder.

One of those grievances comes from Ruben Martinez, a burly 47-year-old body-shop owner and former boxer. He claims a federal police lieutenant and captain tried to shake him down, and when he refused to pay, they arrested his 20-year-old son, Ruben Jr., a student at the Juarez Technical Institute.

Martinez says federal police entered his body shop on April 22, planted two packages of marijuana, then arrested his son for drug trafficking. Ruben Jr. remains jailed. His father says the police asked for a Ford Expedition in return for his son’s freedom.

A federal police spokesman would not comment on the specifics of Martinez’s accusation; he said any citizen can make a complaint against the authorities, and it is up to the public ministry to determine whether charges should be filed.

Commanders Accused Of Collusion With Cartels

The police protesters made even more serious accusations. They say their bosses are in league with organized crime. In an unusually explicit interview broadcast on Milenio TV, an anonymous hooded policeman explains how it works.

“There are times when the commanders tell us on the radio, we won’t work today, don’t leave the hotel," he says. "Then there are reports of convoys of trucks that we believe work for the cartels carrying shipments through Juarez. We’re taken off the streets so that they can do their operations.”

During the mutiny, police dragged their commander, Salomon Alarcon, alias "The Shaman," out of his room and into the parking lot; he was later arrested. The Mexican newsweekly, Proceso, recently reported that "The Shaman" was the top cop on the payroll of the Sinaloa cartel, which is fighting the local Juarez cartel for control of the city.

NPR reported in May, quoting U.S. federal court testimony and local law enforcement officials, that corrupt federal forces assigned to Juarez use their authority to favor the Sinaloa cartel.

What likely prompted the police mutiny is a grim new development in the battle for Juarez.

The local Juarez cartel declared war on the federal police. The cartel has killed more than two dozen officers -- gruesomely dismembering some -- because of the belief that the federales are helping the rival Sinaloa gang.

Gustavo de la Rosa Hickerson, the longtime commissioner of the Chihuahua State Human Rights Commission, says patrol officers confided to him that they were upset that their commanders’ alliance with gangsters was getting them killed.

“And so the crooked police were not only taking money from the enemy, they were playing with the enemy. So there was a major conflict between the dirty police and the officers who were losing their lives.”

A federal police spokesman said the commanders in Juarez, including "The Shaman," are under investigation by the federal attorney general for corruption.

Meanwhile, the 250 mutinous police were all flown back to Mexico City to face charges of insubordination.