Accessibility links
Shakespeare's Star-Crossed Lovers Get A Make-Over In 'Juliet' The Bard is rolling in his grave — and according to novelist Anne Fortier, that's a good thing. Her retelling of Romeo and Juliet is a contemporary fairy tale mixing medieval and modern mystery — a time-shifting maze that unravels the unknown story of the feuding families in fair Verona.

Never Was A Story Of More Woe ... Romeo mourns his beloved Juliet in an 1895 production of Shakespeare's Romeo and Juliet at the Lyceum Theatre in London. In her novel, Juliet, Anne Fortier merges a little fact and a lot of fiction to elaborate on the tale of the young, doomed lovers. W. and D. Downey/Hulton Archive hide caption

The Bard is rolling in his grave -- and according to novelist Anne Fortier, that's a good thing. Her retelling of Romeo and Juliet is a contemporary fairy tale that mixes medieval and modern mystery -- a time-shifting, semi-historical maze that unravels the "unknown" story of the feuding families in fair Verona.

Fortier's protagonist, 25-year-old Julie Jacobs, inherits a key to a safety deposit box in Siena, Italy -- where she travels under her birth name, Giulietta Tolomei. She quickly discovers an ongoing feud between the Tolomeis and other powerful families in Siena. They have been at each other's throats since the 14th century. 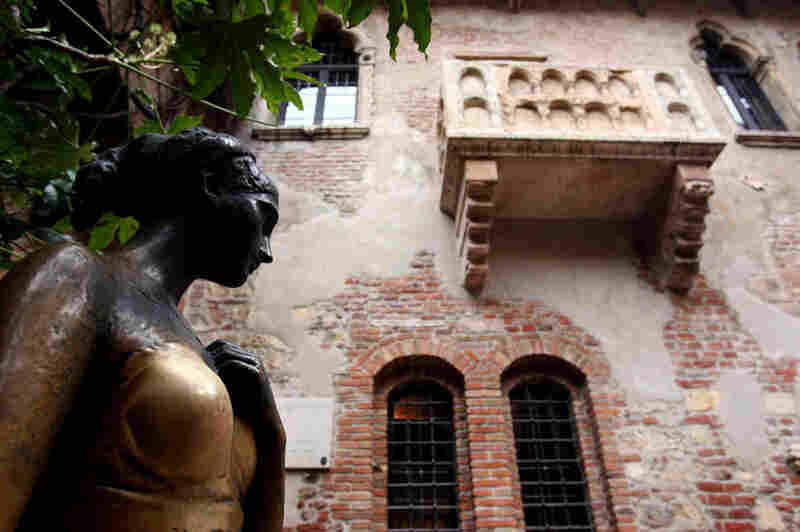 A bronze statue of Shakespeare's Juliet Capulet stands below what is said to be the balcony of her house in Verona, Italy. As a child, Fortier made trips to the landmark with her mother. Maurizio Lapira/AFP/Getty Images hide caption 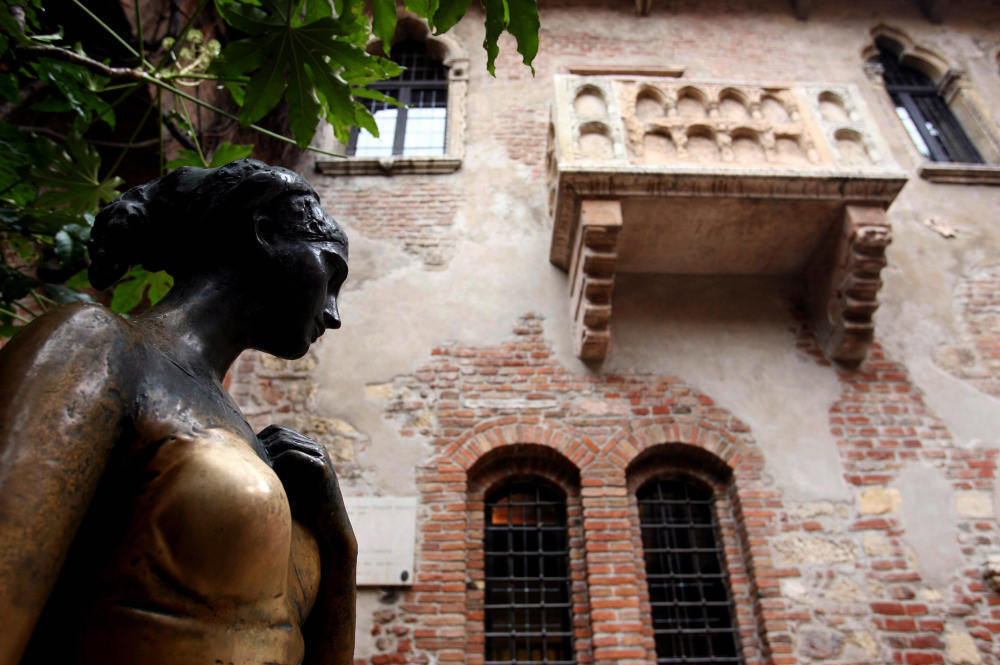 A bronze statue of Shakespeare's Juliet Capulet stands below what is said to be the balcony of her house in Verona, Italy. As a child, Fortier made trips to the landmark with her mother.

Fortier's own fascination with Shakespeare's love story started early, with childhood trips to Verona. "My mother used to live in Verona when she was young," Fortier tells NPR's Liane Hansen. "So we'd go to Verona a lot and visit Juliet's balcony and touch her statue -- which you're supposed to do when you're there -- and see her grave and so on."

Fortier was shocked to learn that the first telling of Romeo and Juliet's story was apparently not set in Verona at all -- and it wasn't written by Shakespeare. It was set in Siena, written by Italian poet Masuccio Salernitano and published in 1476 -- well over 100 years before Shakespeare's fabled tragedy.

Julie unravels the history of her ancestor, the original Giulietta Tolomei, and meets descendants of the rival Salimbeni family. Fortier uses her character's journey to explore the way in which Romeo and Juliet's story might have actually happened. 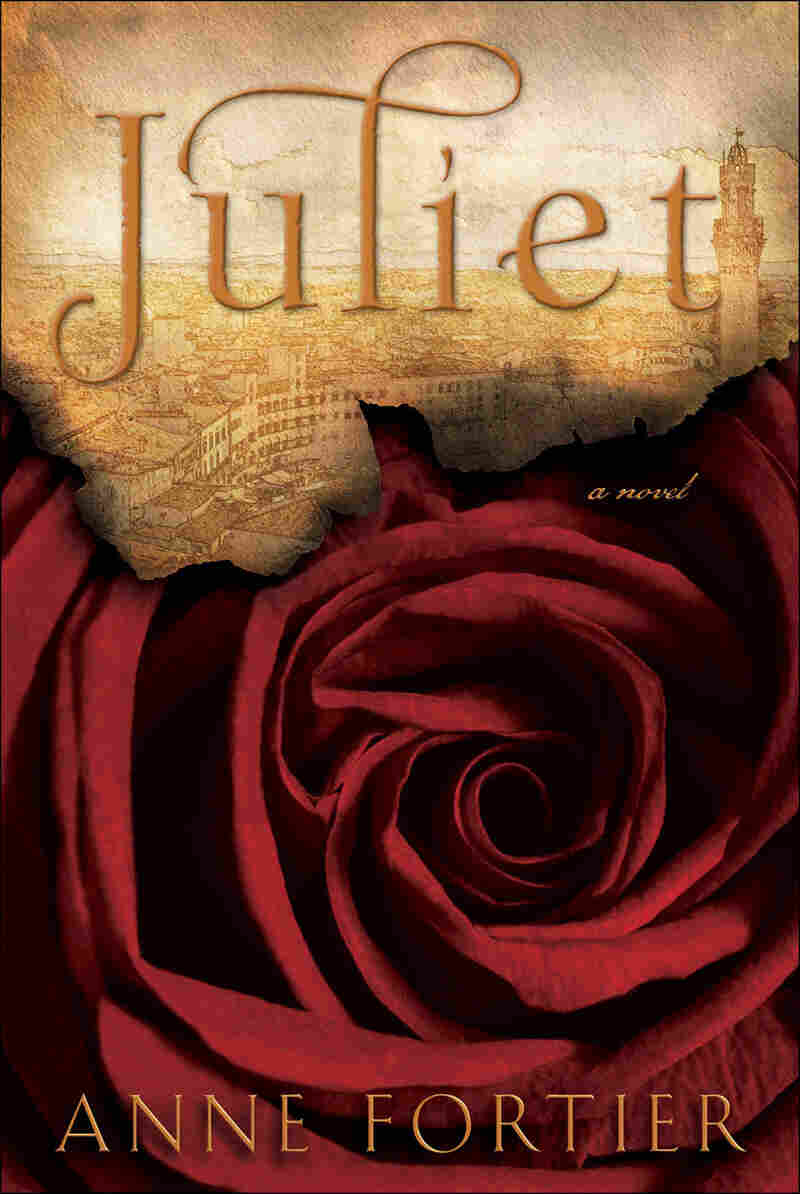 The author argues that the love story was inspired by historical events. In modern day Siena, the biannual Palio horse race is characterized by competitions between rival contrade, or wards, throughout city. "It very much resembles what you imagine as having been those old family feuds," Fortier says.

And, Fortier says, the truce between the Tolomeis and the Salimbenis is a historical fact. In 1337, a massacre between the two families forced the local government of Siena to intervene, and the two families were coerced into signing a peace agreement. The author notes that this uneasy truce mirrors the setting of Shakespeare's Romeo and Juliet.

'Not Weighed Down By Research'

Though Fortier is inspired by Romeo and Juliet's legacy, Juliet is intentionally light on historical research and more focused on applying the love story to the modern day. As Julie Jacobs investigates who might have murdered her parents, she meets long lost relatives in Siena, who suggest that there might be a curse on her family, and the members of the feuding family in Siena ... a pox on both their houses, if you will.

Fortier says she loves books that span two different time periods -- and admires authors who set novels in both the past and the present. But she says that she sometimes finds accounts of the past "a little boring, because the author's been doing so much research." 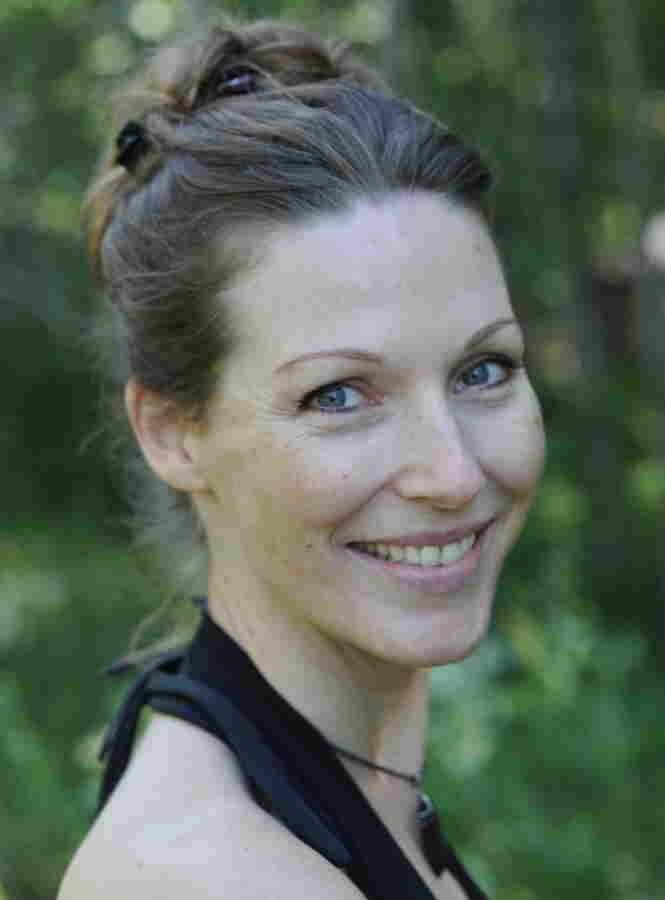 Fortier grew up in Denmark and emigrated to the United States in 2002. David Henderson hide caption 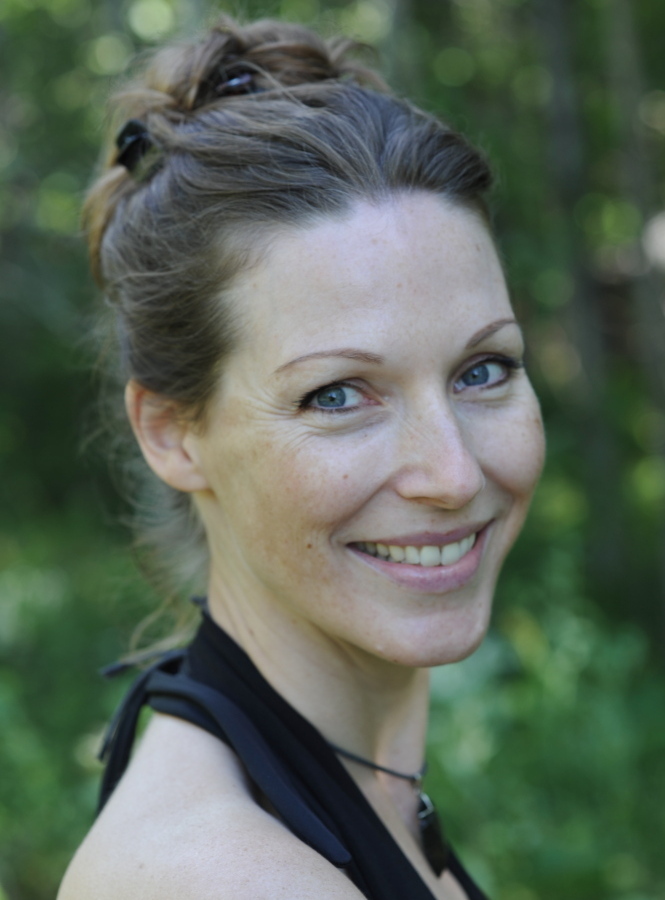 Fortier grew up in Denmark and emigrated to the United States in 2002.

When Fortier set out to write her book, she knew she "would have to make it really action-packed," she explains, "not weighed down by research, but pulled together by action and plot and love and fear -- and all those emotions that make us want to turn to the next page."

When Juliet was published in Denmark, it was criticized for its liberal interpretation of the legendary love story. Fortier says that critics slammed the idea of her book, rather than the book itself.

"If [the Bard is] turning in his grave, it's mostly to see what kind of snobs keep saying that you cannot mix [the] commercial and literary," she says. "Because that's what he was fantastic at doing, and that's why he's so famous still today."

Fortier -- who comfortably self-identifies as a "Dane, turned American ... taking poor Shakespeare hostage in her shameless Dan Brown-esque endeavors" -- doesn't much care what the critics think. Her novel went on to become a bestseller in Denmark.

It took me a while to recover from the letter. Reading it, I could almost hear Aunt Rose dictating it, just as wonderfully scatterbrained in death as she had been when she was still alive. By the time I was finished with Umberto’s handkerchief, he did not want it back. Instead, he told me to take it with me to Italy, so that I would remember him when I found my big treasure.

"Come on!" I blew my nose one final time. "We both know there’s no treasure!"

He picked up the key. "Are you not curious? Your aunt was convinced that your mother had found something of tremendous value."

Umberto squinted. "She wanted to. But you were never around."

I rubbed my face, mostly to avoid his accusatory stare. "Even if she was right, you know I can’t go back to Italy. They’d lock me up so fast. You know they told me -- "

Actually, they -- the Italian police -- had told me significantly more than I had ever passed on to Umberto. But he knew the gist of it. He knew that I had once been arrested in Rome during an antiwar demonstration, and spent a very unrecommendable night in a local prison before being tossed out of the country at daybreak and told never to come back. He also knew that it hadn’t been my fault. I had been eighteen, and all I had wanted was to go to Italy and see the place where I was born.

Pining in front of my college’s bulletin boards with their gaudy ads for study trips and expensive language courses in Florence, I had come across a small poster denouncing the war in Iraq and all the countries that 1 8 Anne Fortier took part in it. One of those countries, I was excited to discover, was Italy. At the bottom of the page was a list of dates and destinations; anyone interested in the cause was welcome to join in. One week in Rome -- travel included -- would cost me no more than four hundred dollars, which was precisely what I had left in my bank account. Little did I know that the low fare was made possible by the fact that we were almost guaranteed to not stay the whole week, and that the tab for our return flights and last night’s lodgings would -- if all went according to plan -- be picked up by the Italian authorities, that is, the Italian taxpayers.

And so, understanding very little about the purpose of the trip, I circled back to the poster several times before finally signing up. That night, however, tossing around in my bed, I knew I had done the wrong thing and that I would have to undo it as soon as possible. But when I told Janice the next morning, she just rolled her eyes and said, "Here lies Jules, who didn’t have much of a life, but who almost went to Italy once."

Obviously, I had to go.

When the first rocks started flying in front of the Italian Parliament --  thrown by two of my fellow travelers, Sam and Greg -- I would have loved nothing more than to be back in my dorm room, pillow over my head. But I was trapped in the crowd like everyone else, and once the Roman police had had enough of our rocks and Molotov cocktails, we were all baptized by tear gas.

It was the first time in my life I found myself thinking, I could die now. Falling down on the asphalt and seeing the world -- legs, arms, vomit --  through a haze of pain and disbelief, I completely forgot who I was and where I was going with my life. Perhaps like the martyrs of old, I discovered another place; somewhere that was neither life nor death. But then the pain came back, and the panic, too, and after a moment it stopped feeling like a religious experience.

Months later, I kept wondering if I had ever fully recovered from the events in Rome. When I forced myself to think about it, I got this nagging feeling that I was still forgetting something crucial about who I was --  something that had been spilled on the Italian asphalt and never come back.

"True." Umberto opened the passport and scrutinized my photo. "They told Julie Jacobs she can’t return to Italy. But what about Giulietta Tolomei?"

I did a double take. Here was Umberto, who still scolded me for dressing like a flower child, urging me to break the law. "Are you suggesting -- ?"

"Why do you think I had this made? It was your aunt’s last wish that you go to Italy. Don’t break my heart, principessa."

Seeing the sincerity in his eyes, I struggled once more against the tears. "But what about you?" I said gruffly. "Why don’t you come with me? We could find the treasure together. And if we don’t, to hell with it! We’ll become pirates. We’ll scour the seas -- "

Umberto reached out and touched my cheek very gently, as if he knew that, once I was gone, I would never come back. And should we ever meet again, it would not be like this, sitting together in a child’s hideaway, our backs turned to the world outside. "There are some things," he said softly, "that a princess has to do alone. Do you remember what I told you . . . one day you will find your kingdom?"

"That was just a story. Life isn’t like that."

I threw my arms around him, not yet ready to let go. "What about you? You’re not staying here, are you?"

Umberto squinted up at the dripping woodwork. "I think Janice is right. It’s time for old Birdie to retire. I should steal the silver and go to Vegas. It will last me about a week, I think, with my luck. So make sure to call me when you find your treasure."

I leaned my head against his shoulder. "You’ll be the first to know." 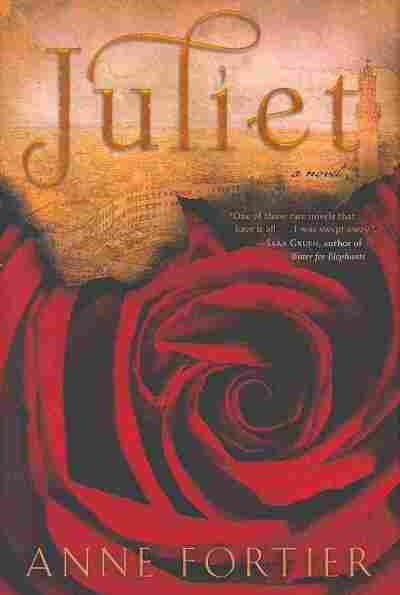