Accessibility links
Berlusconi's Drama Leaves Italy In Minor Role After weeks of political crisis in Italy, Prime Minister Silvio Berlusconi appears determined to stay in power and is playing down talk of early elections. Critics say the crisis is consuming the government, leaving pressing matters -- like the economy -- unattended. It's not clear how long the government can survive. 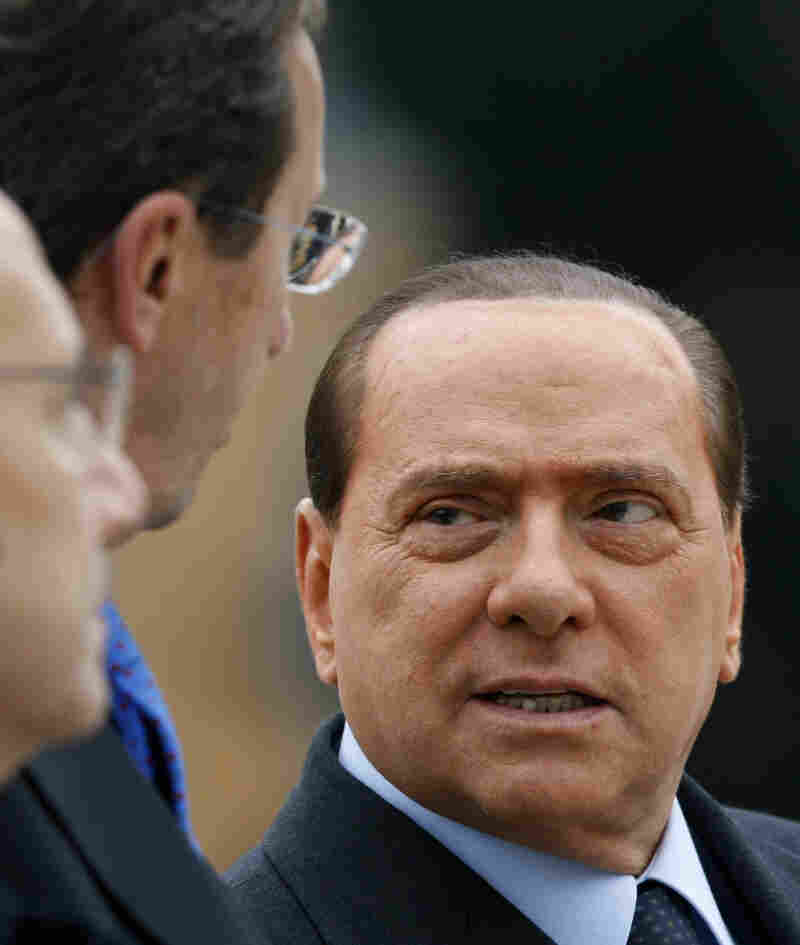 After weeks of political crisis in Italy, Prime Minister Silvio Berlusconi appears determined to stay in power and is playing down talk of early elections. Critics say the crisis is consuming the government, leaving pressing matters -- like the economy -- unattended. It's not clear how long the government can survive.

It's been a rocky summer for the Italian government -- a motley coalition of Northern secessionists, former Fascist nationalists and free-market entrepreneurs.

In July, Berlusconi expelled co-founder Gianfranco Fini from their People of Freedom Party. Fini, who is speaker of the lower house, had shown unwillingness to back legislation that would allow Berlusconi to avoid facing various trials on corruption charges. Fini and his family then became the target of a month-long sensationalist campaign in the Berlusconi-controlled media. Last week, Fini hit back.

In a televised speech, Fini denounced his expulsion as an act of Stalinism. "The People of Freedom Party failed to fulfill its commitment to open dialogue, which is the basis of democracy," he said. "The People of Liberty Party does not exist anymore."

Fini and his 30-odd followers have formed a caucus of their own and could deprive Berlusconi of his parliamentary majority. Fini vowed to support the government platform, but warned Berlusconi not to try to seek permanent immunity from prosecution.

"Berlusconi's main problem, since he entered politics, has been Berlusconi himself," he says. "His first concern is to avoid any of his trials coming to verdict -- and then the rest of the government of the country can take second place."

Berlusconi has been indicted nearly 20 times. He has never been convicted on appeal, either because of the statute of limitations or because of retroactive changes in the law. Since he entered politics in 1993, Berlusconi-led governments have passed 36 laws personally tailored to the media tycoon's personal needs. He now wants yet another law to avoid three pending trials on corruption charges.

While the 73-year-old prime minister was receiving the worst thrashing of his career from his former ally, his remaining coalition partner, the independence-leaning Northern League, began clamoring for early elections. Polls suggest the Northern League would be the big winner at Berlusconi's expense. The prime minister first appeared also to opt for an early vote, only to backtrack the next day. He's now trying to woo independent members of parliament to his side to avoid the coalition's disintegration.

All About Berlusconi; What About Italy?

In a sign of what some analysts say is his judicial obsession, Berlusconi aired his problems at a world forum on democracy in Russia last week.

He first stunned his international audience by describing his good friend Russian Prime Minister Vladimir Putin as a gift from God. Then, in an improvised speech before an audience clearly clueless about Italian domestic politics, Berlusconi accused Italian magistrates of having seized unlimited power. He insisted he, not Fini, is fully in charge. "These are the petty issues of professional politicians who want to gain from power," he said. "They do not affect the country."

But Walston disagrees. He says while the political power game continues, the business of governing has come to a standstill, and economic issues are being ignored despite Italy's negative growth numbers.

"Italy has lost its position as a commercial, producing, manufacturing nation relative to rest of Europe and world," he says. "There are big divisions within the country; we have seen union and wages problems that have not been dealt with. So there are big problems which have to be faced and which are not being faced."

Berlusconi has said he will appear before parliament at the end of this month for a vote of confidence. Only then will it be fully clear whether the government has a chance for long-term survival.