Accessibility links
University Declares A Week Without Social Media What if one day Facebook, Twitter and Instant Messenger just weren't there? Harrisburg University will face just such a reality this week when it enforces a campus-wide social media blackout. 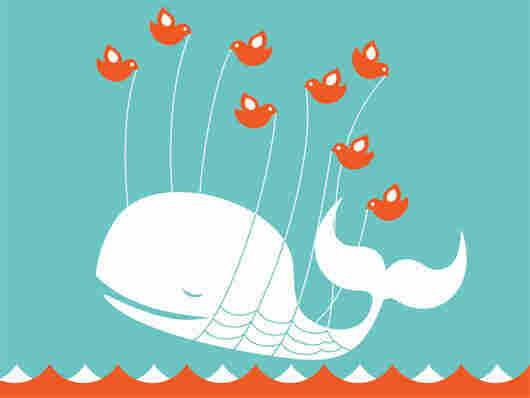 The "Fail Whale" is a familiar sight for Twitter users when the popular social media tool goes down. Twitter.com hide caption

Provost Eric Darr of Harrisburg University of Science and Technology in Pennsylvania tells NPR's Guy Raz that he wanted his students to not only think about this question, but live it.

"Often there are behaviors, habits, ways we use technology that we may ourselves not even be able to articulate because we're not aware of them," Darr says.

So this week, Darr will enforce a campus-wide social media blackout -- no Facebook, no Twitter, no instant messaging -- nothing.

Access to these popular social media tools will be blocked from campus computers through the week. This is not a disciplinary exercise, Darr says, but an academic one. At the end of the week, students will write reflective essays about their time in social media exile.

Three Harrisburg University students, Ashley Harris, Gio Acosta and Oluyemi Afuape, volunteered to discuss the experiment, and it turns out they have mixed feelings.

Afuape isn't a big fan of Facebook, and says he doesn't expect to be challenged by the blackout. But Harris is going to have a hard time not posting her whereabouts to friends.

"My biggest problem is not being able to find people," Harris says, "because I use Facebook and Twitter to find people at school, to see where they're at."

Even before hearing about the blackout, Acosta found it necessary to wean himself off the constant social media chatter.

"I had my phone set to receive Facebook, texts, tweets -- and ring -- so I had to turn that off between 3 and 6 in the morning so I can actually sleep during that time," Acosta says. "If you don't set the limits, it's a 24-hour thing."

Most of the students found out about the school-wide blackout through, of course, social media.

Hope From The 'Post-Facebook' Generation

Outspoken social media critic Jaron Lanier (who was also named one of Time magazine's 100 most influential people of the year) says Harrisburg University's experiment may be too extreme. He would prefer that students donate a penny to charity every time they access social media.

"Because that would create awareness, they would be aware of how much they were doing," Lanier says, "making the use of it into something that's more conscious and more considered."

Lanier is mainly worried that social media creates superficial ties rather than lasting friendship. But he says he's optimistic about the "post-Facebook generation" -- teenagers he hears from in high schools who don't identify with Facebook.

Lanier hopes this generation will spark something of a renaissance, declaring, "'No, we are individuals, we invent ourselves, we're not going to have some third-party advertising business define us. We invent our own taste, and furthermore, we decide what friendship means.'"