Accessibility links
Claims Of Border Program Success Are Unproven The Border Patrol points to three measures to prove Operation Streamline's success: It deters future illegal border-crossers, fewer people are apprehended for crossing illegally, and it allows the government to focus on more serious crime. But a closer look shows these arguments don't always hold up. 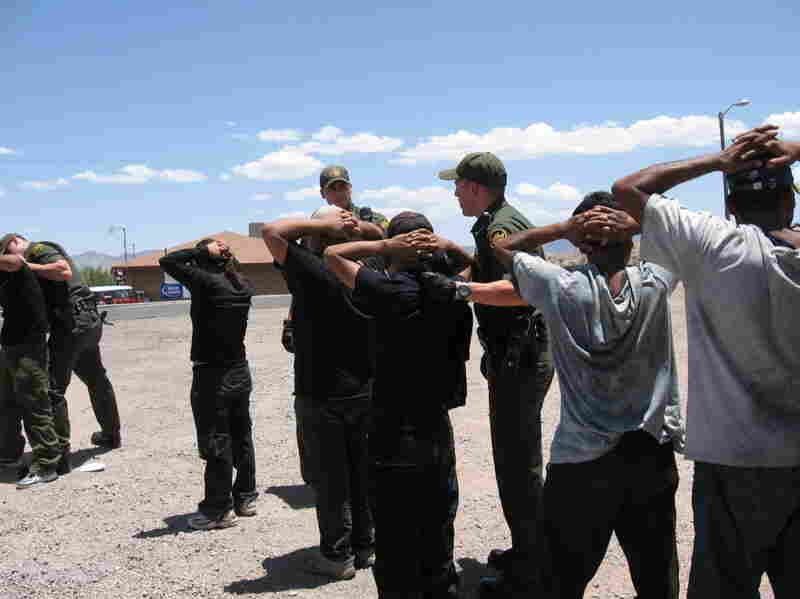 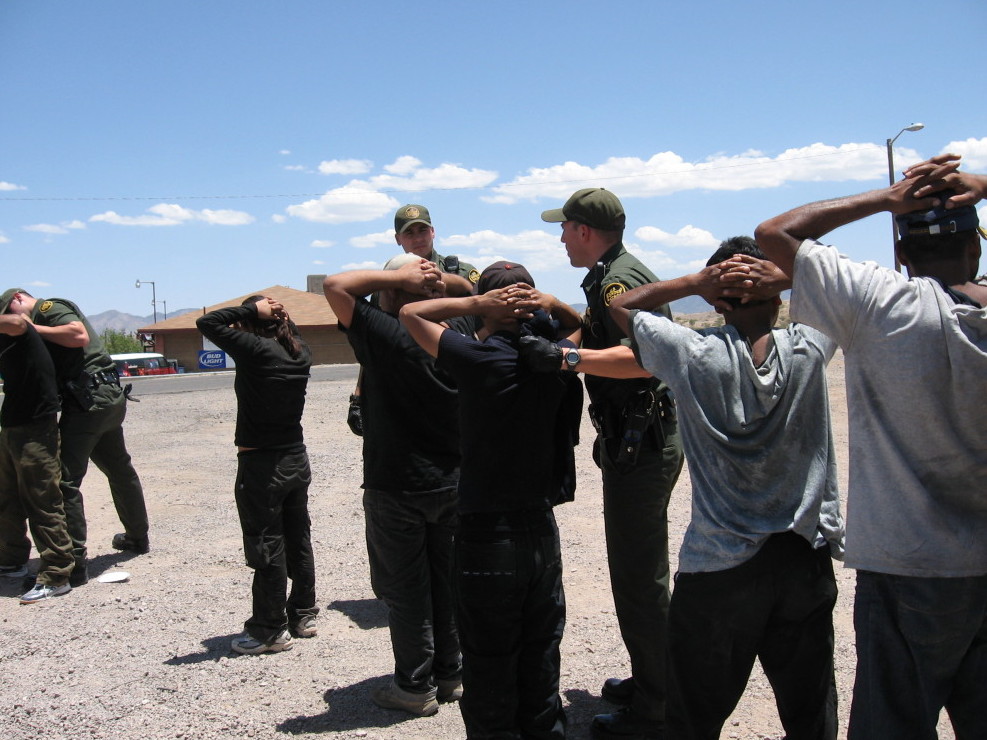 Border Patrol agents arrest migrants in 2007 after they illegally crossed into Nogales, Ariz. Operation Streamline puts such people into federal courts, giving them criminal records. The Border Patrol says the program allows the agency to focus on more serious crime, but federal judges say it causes backups in the system.

This is the second in a three-part series that takes an in-depth look at a little-known program that is pushing the boundaries of the American justice system along the U.S.-Mexico border: Operation Streamline. NPR's Southwest correspondent Ted Robbins has spent the past three months analyzing court data and documents on the program.

The Border Patrol says three measures prove Operation Streamline is a success. First, it says, few of those convicted try to cross the border again. Second, it points to the decrease in the total number of people being apprehended crossing illegally. And third, the government says Operation Streamline has allowed it to concentrate on more serious crime.

NPR was not given access to Operation Streamline prisoners while they were in custody, but the Centro para Atencion a los Migrantes Deportados in Nogales, Sonora, provided a place to test the claim that Operation Streamline acts as a deterrent, stopping people from crossing again.

The center is a religious-run charity that feeds people who've recently been deported. Men and a few women sit on benches in the covered open-air building to hear a blessing and eat their dinner.

Few of the deportees had heard the term "Operation Streamline," but over a period of two days, 35 of 96 people said they had appeared before a judge and been convicted.

And 30 of the 35 said they would cross again. That 85 percent figure is much higher than the 20 percent recidivism rate the U.S. government uses. So the claim doesn't hold up, at least in this group. Only one man says he won't cross again because he fears a longer jail sentence.

Most are like Filiberto Robledo-Aguilar, who traveled thousands of miles north from Chiapas before crossing in the desert and getting caught. He says he needs to get back into the United States because his family needs money. And he says he has to do it illegally because he can't get a work permit to pick fruits and vegetables.

"I don't want to stay," he says in Spanish, "I just want to go to the U.S. and earn some money and come back to Mexico 'cause all my family's here."

Regardless of what these men say they'll do, Department of Homeland Security spokesman Matt Chandler says the program works as part of the government's larger border security plan.

"Along with our other efforts," Chandler says, "Operation Streamline has shown its effectiveness and continues to be a valuable tool in decreasing the number of individuals attempting to illegally enter the United States."

Marc Miller doesn’t buy that argument. Miller is a law professor at the University of Arizona, specializing in criminal procedure and sentencing. He says there's no way a misdemeanor conviction will deter significant numbers of people from crossing.

The cities marked on the map are the federal jurisdictions that have implemented Operation Streamline.

"If dying in the desert is not a deterrent, it's hard to imagine why spending no or little time in federal prison and being returned to your home country is a deterrent," Miller says.

He doesn't even think giving Operation Streamline defendants the maximum sentence would matter.

"I don't think six months would make a difference here, either. The drivers of immigration are economics, not sanctions," he says.

Historically, illegal immigration rises when more jobs are available. That fact challenges the government's second measure of Operation Streamline's success: that apprehensions along the border are way down because of the program.

Not only is there a recession keeping people away, but over the same time Operation Streamline has been implemented, the government has doubled the number of Border Patrol agents, built nearly 700 miles of fencing and vehicle barriers, and added detection devices such as cameras and sensors.

Dean Sinclair is the deputy chief patrol agent in the Del Rio, Texas, sector where Operation Streamline began. He admits lots of things have caused the drop in apprehensions.

"Streamline is but one operation," he says. "We have numerous other strong enforcement deterrence operations."

The third and final reason the Border Patrol labels Operation Streamline a success, Sinclair says, is that it allows agents to pursue more drug dealers and violent criminals.

"It's freed us up to be able to concentrate on the more serious threats to this country. And that's the success of Streamline," he says.

Alia Ludlum is presiding judge of the federal court in Del Rio. She says she has noticed a difference in the years since Operation Streamline began.

The federal government said Operation Streamline would free up courts from deportation hearings to allow them to focus on more serious crime. But on average, convictions of other felonies decreased 9.5 percent from when the program took effect until 2009. The table below shows the number of felony convictions the year the program was implemented in each location and the convictions there in 2009.

But considering all jurisdictions where the program is in effect together shows a broader picture. Felony convictions not related to immigration -- violent crime, white-collar crime -- were down about 10 percent from the year Operation Streamline took effect to 2009, the latest full year available.

The one place where those convictions have gone up steadily year after year is Southern California, the only border jurisdiction where Operation Streamline is not in effect.

The Department of Homeland Security would not respond directly to that analysis. But Chandler reiterated that aggressive prosecution under Operation Streamline has deterred illegal crossers and led to more drug seizures.

"Streamline frees up our officers and agents at the border to focus on interdicting transnational criminal operations [that] are attempting to smuggle illicit goods across the southwest border," Chandler says.

Law professor Miller argues that the Border Patrol may be freed up, but the mass prosecutions are creating the opposite effect on the justice system by tying up the courts.

"Are there public safety effects to making these the priorities over bank robbery? Over white collar, over fraud? Absolutely," Miller says.

Even while Border Patrol agents on the beat and homeland security officials in Washington proclaim Operation Streamline's success, they admit that success can't be measured separately from other programs. Yet, there are calls in Congress to expand Operation Streamline again. And no one knows what that will cost.