Accessibility links
Giant Sharks Swim Onto Species Watch List The basking shark, which can grow to be as long as a school bus, has been added to the "species of concern" list. That means the government doesn't yet have enough information to say it is threatened or endangered, but it might be. The decision opens up new money for research. 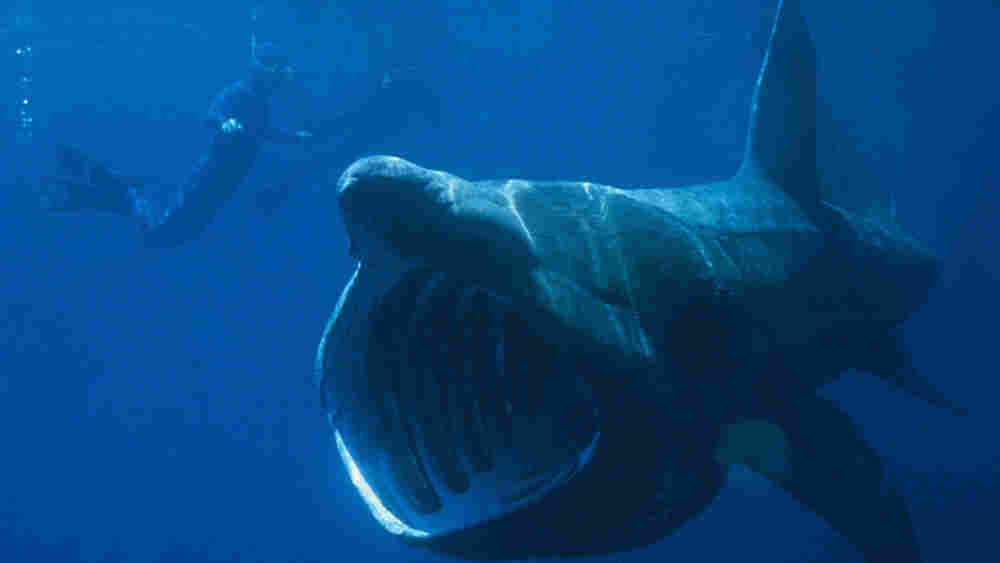 The federal government declared in April that basking sharks in the Pacific Ocean are a "species of concern," which means the government doesn't yet have enough information to say the giant fish is threatened or endangered, but it might be.

"Giant fish" isn't an exaggeration -- the largest recorded basking shark was the length of a school bus. And for fisheries research biologist Heidi Dewar, technical language just won't suffice when it comes to describing why basking sharks are interesting to study.

"They're just really cool and amazing-looking and beautiful," says Dewar, who works for the National Oceanic and Atmospheric Administration's Southwest Fisheries Science Center in La Jolla, Calif. "There's nothing like just driving up in a boat to one of these monstrous brown creatures slowly, gently, peacefully swimming through the ocean." 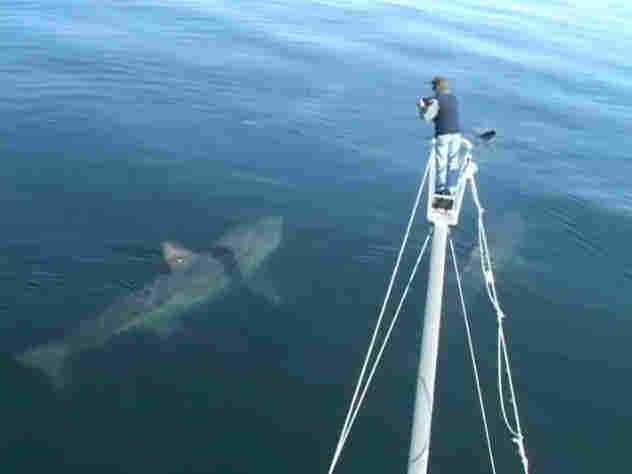 Dewar says basking sharks can grow to be 30 feet or longer, and they have that distinctive dorsal fin that can poke out of the water when they're near the surface. But she says there's no risk of humans being attacked by such monstrous sharks.

"Similar to the other large elasmobranchs, like whale sharks and manta rays, they're filter feeders," says Dewar, referring to the group of marine species that includes the sharks, rays and skates.

Instead of swimming after their dinner, basking sharks just open their cavernous mouths. Comb-like structures called "gill rakers" filter tasty critters like krill out of the water for the shark to dine on. The sharks do have teeth, but not the kind that would inspire fear.

"If you took a grain of rice and cut it in half, that's what the teeth of a basking shark look like," she says.

Greg Skomal, a shark specialist with the state of Massachusetts Division of Marine Fisheries, says basking sharks probably don't use their teeth at all for eating.

"However, I do think they're used by the males to grasp onto the females during courtship and during mating," Skomal says, "so I do believe the teeth aren't completely useless."

Skomal has been studying the sharks in the Atlantic. He says until recently, scientists thought the sharks mostly stayed in the cooler Atlantic waters off North America. But over the past decade, satellite tracking data have told a different story.

"Here we have a species that we thought was largely a cool-water animal, migrating down south into tropical waters, as far south as South America and as far south as south of the equator," Skomal says.

NOAA's Dewar says that now that her agency has declared the basking shark a species of concern, there's a pot of money for doing similar tracking studies for the sharks in the Pacific. She wants to know not only whether the sharks are swimming north and south along the eastern Pacific shoreline, but also "if they're traveling across the Pacific and consequently interacting with high-seas fisheries or fisheries off of Japan or China or Taiwan."

Dewar says there's a concern that Asian fleets might be taking the shark for its prized fins, and she says the effort to protect the basking shark has implications that go beyond a single species.

"One thing about this charismatic megafauna is that I think they really help people connect with life in the ocean," she says.