Accessibility links
Johnny's Death: The Untold Tragedy In Birmingham It was 47 years ago this week that four black girls died in the bombing at a Baptist church in Alabama. But there was another killing that day. A 16-year-old black boy was shot in the back by a white police officer. His story's now being told.

Forty-seven years ago this week, on Sept. 15, 1963, a bomb exploded at the Sixteenth Street Baptist Church. The blast killed four little girls and became a tragic marker in civil rights history.

Racial violence broke out on the streets there that afternoon, leading to another, less well-known killing that day. For decades, the circumstances surrounding 16-year-old Johnny Robinson's death remained a mystery.

Johnny Robinson, who was 16 when he was killed during the unrest following the infamous church bombing in Birmingham on Sept. 15, 1963. Courtesy of Diane Robinson Samuels hide caption

The family didn't talk about what happened to Johnny just a few hours after the explosion at the Baptist church.

"Back in those days parents didn't discuss that," says Leon Robinson, 60, Johnny's brother. "They didn't set down and talk to us like we talking now. Kept everything inside, you know. So we just had to deal with it ourselves. That's what we did."

Johnny's sister, Diane Robinson Samuels, remembers arriving at the hospital late in the afternoon on that awful day.

Her older brother Johnny was dead, shot in the back by a white police officer. Today, FBI files in the archives of a Birmingham library offer more detail about what happened that afternoon.

Johnny was hanging around with a few other black teenagers near a gas station on 26th Street. It was a tense scene. White kids drove by, waving Confederate flags and tossing soda pop bottles out car windows. They exchanged racial slurs with Robinson and his group.

FBI agent Dana Gillis works on civil rights cases in the South. "There was a lot of back and forth that you might expect between individuals that were sympathetic to the death of the girls and their families as opposed to those individuals who had no feelings whatsoever for what was being done," Gillis says.

Witnesses told the FBI in 1963 that Johnny was with a group of boys who threw rocks at a car draped with a Confederate flag. The rocks missed their target and hit another vehicle instead. That's when a police car arrived.

Officer Jack Parker, a member of the all-white police force for almost a dozen years, was sitting in the back seat with a shotgun pointed out the window. The police car blocked the alley.

Gillis describes what happened next.

Other police officers in the car offered differing explanations for the shooting.

One said it could have been an accident because the driver slammed on the brakes -- jostling Parker, who mistakenly fired the gun. Another officer said the car might have hit a bump in the road.

But other witnesses with no ties to the police said they heard two shots and no advance warnings. Some news reports at the time concluded, mistakenly, that the kids had been tossing rocks at the police.

A local grand jury reviewed the evidence back in 1963 but declined to move forward with any criminal prosecution against the white police officer. A federal grand jury reached the same conclusion a year later, in 1964.

Doug Jones prosecuted two of the men responsible for the bombing when he was the U.S. attorney in Birmingham during the Clinton administration. Jones is white, and a lifelong resident of the area. He says he's not surprised the Johnny Robinson case went nowhere.

"Those cases involving the excessive force or discretion of a police officer are very, very difficult to make even in today's world much less in 1963 where you would most likely have an all-white, probably all-male jury who was going to side with that police officer by and large," Jones says.

The four little girls who died in the church basement attracted worldwide attention. The Rev. Martin Luther King Jr. delivered the eulogy at a joint funeral service for three of them.

Leon Robinson and Diane Robinson Samuels say that for years their family didn't talk about what happened to their brother Johnny the day he was killed. Carrie Johnson/NPR hide caption

The Justice Department and the White House asked about the Johnny Robinson case at the time.

Leon Robinson, Johnny’s little brother, might agree with that. "I was just so thankful I wasn't with him that day," Robinson says. "I probably would have wound up getting killed too."

Then a few years ago, the FBI reopened the investigation as part of its effort to figure out whether it could prosecute old civil rights cold cases from the 1960s.

It wasn't until the FBI's Gillis came to the family's neighborhood a few months ago that the Robinsons got a real picture of what happened to their 16-year-old brother.

On a recent day, Samuels sat at her kitchen table in a tan brick house, touching a plastic bag filled with mementos -- like her brother's funeral program and some autopsy photos from a book that show the fatal wound in his back.

"We didn't hear nothing else about what was going on, whatever; til that FBI came here, we didn't even know it was no cold case or nothing,"  Samuels said. "Then he came to our house and sit down to tell us what had happened. Me and my brother now. They didn't tell us while my mama was living; my mama died in 1991."

The family says Johnny was a good kid. But the Robinsons had troubles. Their father died in a fight with a neighborhood man a few years before Johnny's death. The younger kids went to live with an aunt.

In the years after Johnny's shooting, their mother didn't want to discuss it. She ended up in a psychiatric hospital for a while. Robinson said the family never really talked about what happened. In fact, he says, he and his sister went to school the next day. 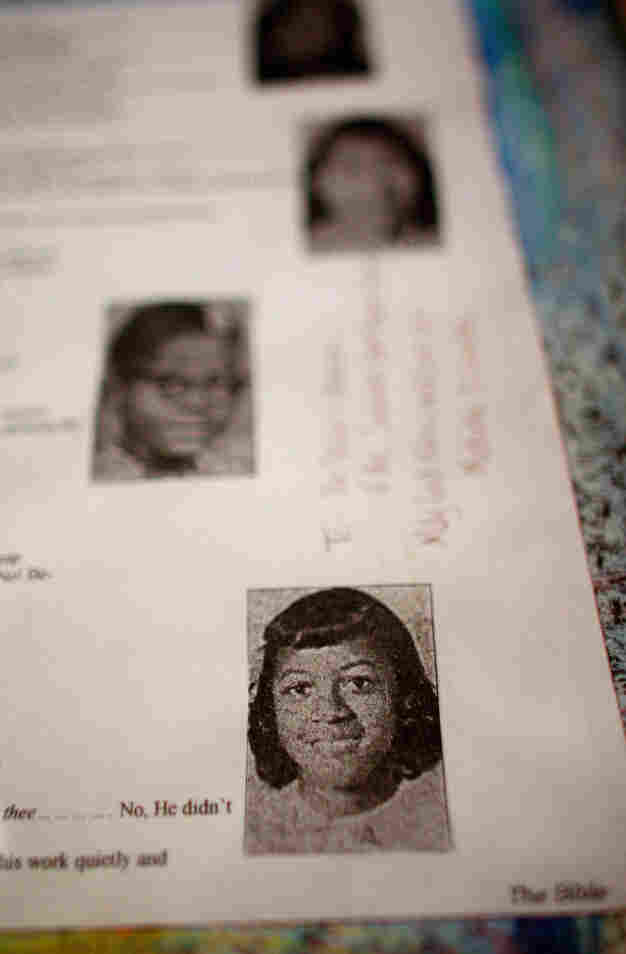 That reluctance to talk about it is one reason Johnny's death didn't get much notice until recently. There are other reasons as well.

The police were plenty busy around that time. They were fighting, among other things, a proposal to integrate the force by bringing in black officers.

Jack Parker, the officer who shot Johnny, was head of a Fraternal Order of Police lodge. He signed an ad in the newspaper that fall arguing against integration of the police force.

The FBI and the Justice Department told the Robinsons they couldn't move forward with a possible case of excessive force or hate crimes against a dead man.

Johnny's previous brushes with the law also may have been a factor. They made his story just a little less shocking than the little girls' tragic end. Johnny had a juvenile record and had served time in detention. He'd been picked up by the Birmingham police in 1960, when he was 13 years old, on suspicion of burglary and grand larceny.

In the past few years, the Robinsons have started to get some local recognition. The city of Birmingham proclaimed Johnny Robinson a foot soldier in the civil rights movement.

Gillis of the FBI says he's sorry it took so long for the family to get information about their brother's death. "When you look at the history of that day and age, that was just the loss of a life," Gillis says. "And it may not have been a life that had value on the part of the institutions that were in place at that time."

Tom Perez, leader of the Justice Department’s civil rights unit, says that while telling the story of Johnny's death most likely won't bring a legal conclusion to the story, it may help bring another kind of resolution.

"People have died, memories have faded, evidence has disappeared or is no longer available," Perez said. "The measure of our success is ... our ability to uncover the the truth in all of these cases. And as a result of uncovering the truth, I think we are bringing closure and understanding to this dark chapter in our nation’s history."

But Samuels says she has mixed emotions about revisiting the past. She says her heart's still heavy. And she's had several heart attacks. But she also feels the death of someone like Johnny -- a kid who may have had some problems but didn't deserve to die -- belongs in the annals of civil rights history.

"They shouldn't have just focused on them little girls," she says of the attention paid to the bombing victims by those who mourned the violence of Sept. 15, 1963. "You know. The big wheels. I guess you had to be in the big league. But in my heart, me, I am a big wheel. And that was my brother."