Accessibility links
'Never Let Me Go': A Tale Of A Challenging Friendship Packed with young acting talent, 'Never Let Me Go' is believable and moving. Three friends leave boarding school to face a disturbing fate and navigate a complicated relationship. The mood created by novelist Kazuo Ishiguro is well captured in beautiful but melancholy scenes. (Recommended) 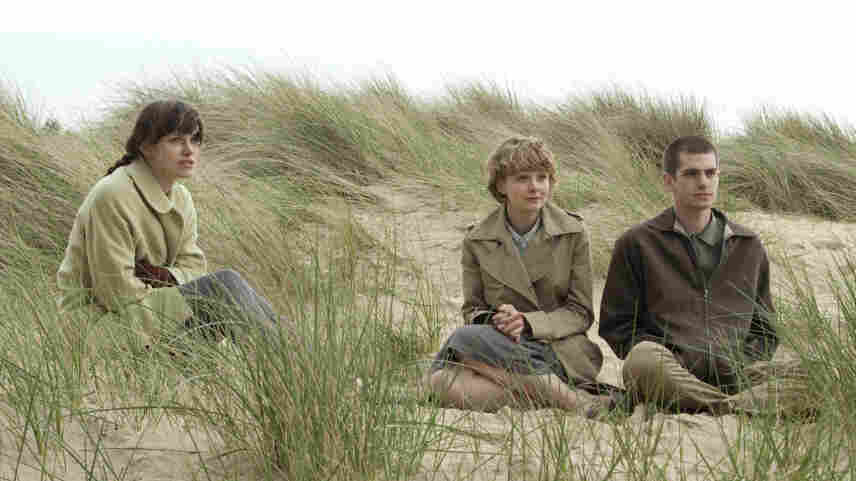 A British boarding school provides the setting for the new film "Never Let Me Go." It's based on a novel by British writer Kazuo Ishiguro. He's already had one Oscar-nominated film made from another novel, "The Remains of the Day."

Critic Kenneth Turan has our review.

KENNETH TURAN: "Never Let Me Go" stars the A-team of young British acting talent: Carey Mulligan, Andrew Garfield and Keira Knightley. It's a moving and provocative film that initially unsettles, then disturbs, and finally haunts you well into the night. If this sounds a bit mysterious, that's what I'm going for. If "Never Let Me Go" is to be effective, the heart of its story has to reveal itself as gradually and unhurriedly as possible.

After a brief introduction, the film flashes back to the bucolic grounds of an English boarding school called Hailsham.

Ms. RAMPLING: (as Miss Emily) It has come to my attention...

TURAN: It's the kind of place Mr. Chips would be at home, but something about it is peculiar. Headmistress Miss Emily, well-played by Charlotte Rampling, is suspiciously strict about what sound like minor violations.

Ms. RAMPLING: (as Miss Emily) It is much, much worse for a student of Hailsham to smoke cigarettes than anyone else. Students of Hailsham are special.

TURAN: The students are on the very cusp of teenagerdom, so they're more concerned with each other than what adults might be saying, even when a new teacher, played by Sally Hawkins, clues them in on the extraordinary reality of their lives.

Ms. SALLY HAWKINS (Actor): (as Miss Lucy) Do you know what happens to children when they grow up? No, you dont. Because nobody knows. They might become sportsmen or bus conductors or racing car drivers. They might do almost anything. But with you, we do know. None of you will do anything except live the life that has already been set out for you.

TURAN: Once they become adults, the fraught relationship between Kathy, Ruth and Tommy becomes the heart of the film. It's Carey Mulligan's performance as Kathy that's the key to the film's success. The actress received an Oscar nomination for "An Education," but her persuasive underplaying here is the best she's done so far. There's a haunting, melancholy aspect to Mulligan's performance that expresses the sense of people missing out on something indefinable, that is at the center of the film.

"Never Let Me Go"'s extreme restraint will not please everyone, but it's the power of novelist Ishiguro's unsettling vision of whose life is worth saving that finally holds us.