Accessibility links
Beyond Craigslist, Many Markets For Sex Traffickers The online-classifieds giant recently shut down the adult-services section of its website amid pressure from human-rights advocates and after repeated threats from state law enforcement officials. But Craigslist is hardly alone in hosting ads for sexual services.

Listen
Beyond Craigslist, Many Markets For Sex Traffickers

Congress is set to hold hearings Wednesday on the sex trafficking of minors, and among the witnesses will be a representative from Craigslist. The online-classifieds company recently shut down the adult-services section of its website after repeated threats from state law enforcement officials.

But Craigslist isn't alone in its shady offerings.

"Craigslist is only one of the many vehicles out there on the Internet that post advertisements for illicit sexual acts," says Sgt. Greg Albin, a member of the vice squad in San Jose, Calif., and the veteran of many sex-crime investigations.

Albin says if shutting the Craigslist ads down saves one child from prostitution, that's great. But, he adds: "I don't think [that's] going to be the answer, because people will work around it." 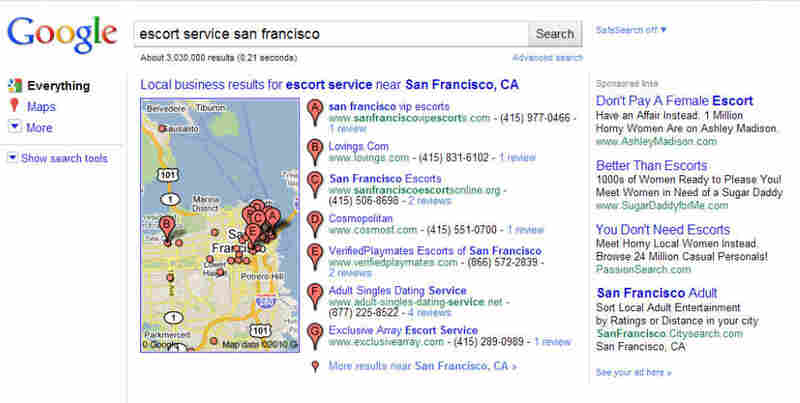 Click image to view an enlarged screen grab taken on Sept. 13, 2010. Google says it doesn't place ads for sex, but that adult dating services are allowed. Some would argue that these ads  -- under "Sponsored links," at page right -- promise more than just a date. via Google hide caption

Google says it doesn't place ads for sex, but that adult dating services are allowed. Some would argue that the  ads  -- under "Sponsored links," at page right -- promise more than just a date.

In fact, Albin says, they already are. For example, he says a website called Craigslisterotics.com was actively soliciting traffic from the former adult services section of Craigslist. And online-safety advocates, Parry Aftab of Wired Safety among them, are expecting even more sites to pop up.

"There's money that can be made here," she points out. "I suspect that you're going to be seeing a lot more of them through photos, video and new offering sites that are out there."

There are also plenty of ads for sexual services that can be found on major commercial websites other than Craigslist -- Google and eBay, to start with.

But Albin says the big companies aren't that helpful: "None of them go over and above to cooperate with police investigations."

The companies have other factors to weigh, he explains.

"All of them consider confidentiality quite a bit. All of them rely on their First Amendment rights."

All of the major online companies say they don't allow ads for sex. But search Google for local escort services, and chances are dozens of sponsored links -- all powered by a Google-run ad network -- will pop up, with headlines like "Sugar Daddy for Me" and "Meet Real Naughty Women Tonight."

A company spokesperson said Google screens ads with a combination of automated technologies and human review, but things slip through the cracks.

The Spanish-language site Loquo has ads for sex -- although eBay, its parent, says it's going to take them down. Village Voice Media, whose Backpage.com is filled with graphic pictures, didn't respond to NPR's questions by deadline.

Malika Saada Saar, executive director of the Rebecca Project for Human Rights, says the Internet has increased the sex trade in minors. Pimps once had to put young girls on the street where it was easier for police to spot if they were underage.

"Now those girls are hidden because of the role of the Internet," Saada Saar says, "and so an individual can go from buying a couch to buying a girl in the full privacy of his home."

Saada Saar estimates that as many as 300,000 minors each year are being trafficked into the sex trade in the U.S. And unfortunately, says Albin, it isn't easy to spot which ads are pimping minors.

"Nobody puts information out so that when you look at the ad, it's obvious that they're underage," he says, "because if that was the case we would be targeting them and only them. Because that would be the most important issue."

Connecticut Attorney General Richard Blumenthal spearheaded an ultimately successful effort by some 40 state attorneys general to get Craigslist to shutter its adult-services section. And "we have other sites in our sights, so to speak," Blumenthal says -- meaning he's in discussions with many other companies, though he wouldn't say which ones.

"This effort is simply to persuade responsible sites that they must have the will and the wherewithal to eliminate these prostitution ads by using screening, flagging the ads through community involvement and putting people over profits."

Craigslist and other websites are largely protected from liability by the Communications Decency Act of 1996, which exempts site owners from legal responsibility for what their users (and others) put up. But at least a few legal analysts point to another law, the Trafficking Victims Protection Act, which might make sites liable if they make money off ads for illegal services.

Still, some online-safety advocates like Aftab think the attacks by the attorneys general on legitimate companies such as Craigslist are misguided.

"I don't think it's going to make women and minors any safer," she argues. "Instead you're going to be seeing a lot more underground websites that are run by people who don't care as much as Craig [Newmark] does."

And even law enforcement officials admit that quashing illegal services ads is like playing a game of Whac-A-Mole: Every time you shut down one site, they say, another one pops up.