Accessibility links
'Boiling Mad': A Tea Party Origin Story Kate Zernike's Boiling Mad chronicles the rise of the Tea Party movement, which she says was driven by young, tech-savvy libertarians who have built the movement up from its grass roots. 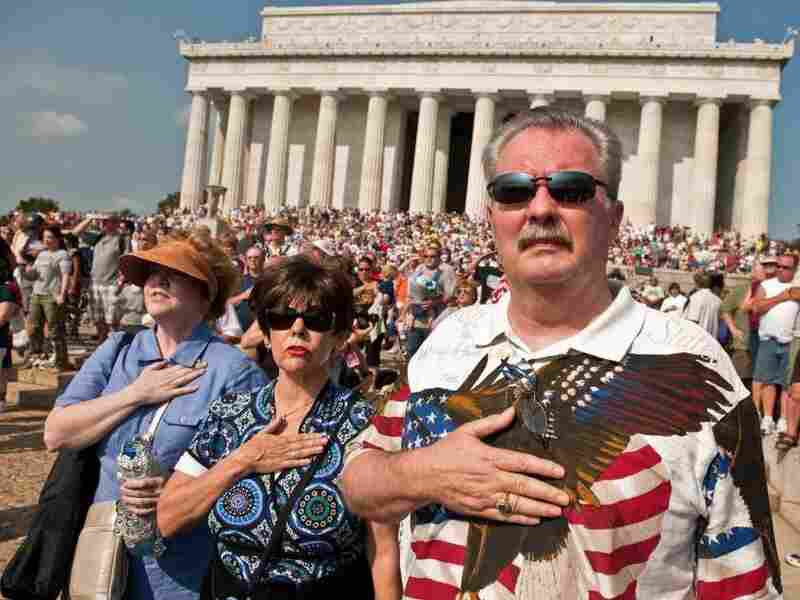 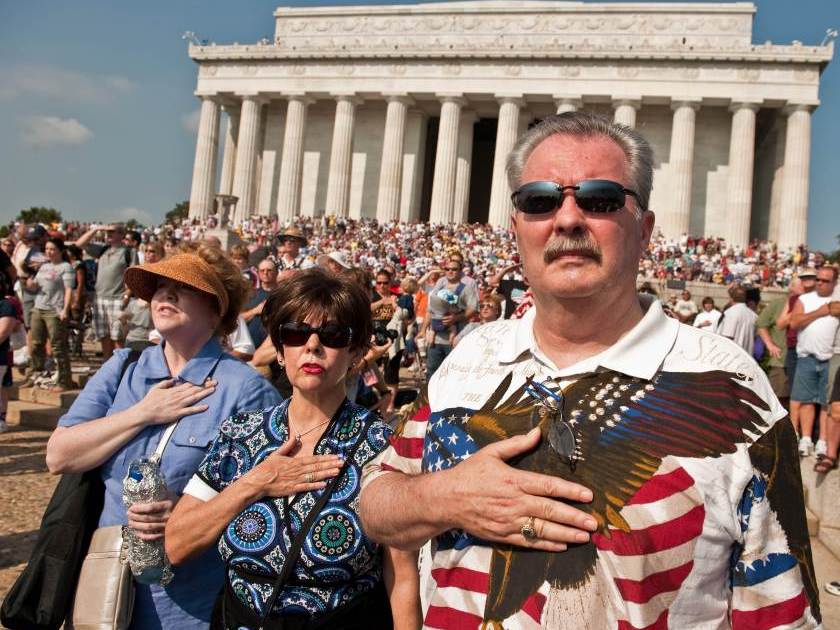 Participants at commentator Glenn Beck's Aug. 28 Tea Party rally listen to the national anthem in front of the Lincoln Memorial in Washington, D.C.

New York Times reporter Kate Zernike has found the original seed of the Tea Party movement -- and she isn't anything like the old, white Christian conservatives that polls and photos from rallies might suggest.

She's a half-Mexican math teacher with a nose piercing who enjoys doing improv theater on weekends.  Her name is Keli Carender and she's just the beginning of the Tea Party story Zernike tells in her new book, Boiling Mad.

Zernike tells NPR's David Greene that Carender's frustration with the stimulus package, bank bailouts and the collapse of the economy drove her to take after the anti-war protesters of her native Seattle and organize a protest.

"She calls up a conservative radio host and she e-mails Michelle Malkin, the conservative blogger, and they both give her a plug for her protest and she gets about 200 people there," Zernike says.

"She really is the germ of this movement. And about a week and a half later is when what everybody calls 'The Rant' happens."

"The Rant," delivered from the floor of the Chicago Board of Trade, is CNBC reporter Rick Santelli's critique of President Obama's proposal to help homeowners who can no longer afford their mortgages.  In it, Santelli proposes the idea of having a tea party in Chicago, and that, Zernike says, is what sparked some major organizing.

Between the libertarians, the social conservatives and the suburban moms, Zernike says it became clear that even those original conference call organizers weren't all coming from the same place.

"It's really hard to put a label, or put a face on the Tea Party," Zernike says.

And yet they all came together with one goal in mind: to defeat the democratic majority in Washington. 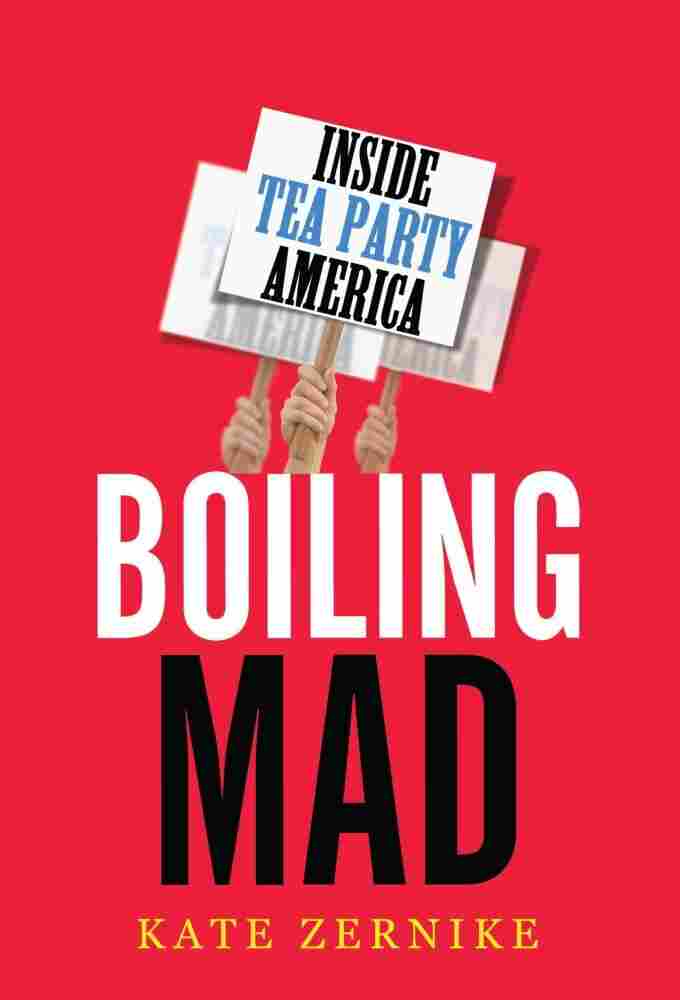 Inside the summit, Lord Monckton, a British global warming denier, posed for photographs with Tea Partiers carrying Jeff McQueen’s flag of the Second American Revolution. Young representatives from antitax groups encouraged the Tea Partiers to get involved locally to fight property tax assessments. Led by Dick Armey, the Tea Partiers went across Pennsylvania Avenue to join the cacophony of the rally in Freedom Plaza. Steve King was onstage, declaring, "We do not believe in a government that’s oppressive, nor do we believe in a government that confiscates our earnings and rewards people that don’t earn, and eats our substance and drains American vitality. That’s what’s going on in America today.

"Cars," he added, "should be made by Americans."

THE COMPANY I WORKED FOR DOWNSIZED AND LAID ME OFF TO SAVE MONEY. I THINK IT’S TIME TO DOWNSIZE THE GOVERNMENT AND SAVE US MONEY.

Another quoted Bastiat’s The Law on legal plunder:

THE LAW TAKES FROM SOME PERSON WHAT BELONGS TO THEM AND GIVES TO ANOTHER PERSON TO WHOM IT DOES NOT BELONG!

A white flag featured the silhouette of a gun, with the legend "Come Ahead and Take It."

As the crowds gathered again that evening for the FreedomWorks rally under the Washington Monument, the show was a blend of jingoism and grievance. Lord Monckton declared America the land of opportunity: "You can be born in Kenya and end up as president of the United States!" He led the crowd in cheers of "Global warming is bullshit!" and urged people to scream loud enough that the White House could hear. "Albert Arnold Gore," he declared gleefully, "I am coming to get you!" Victoria Jackson, the former Saturday Night Live star, sang "There’s a Communist in the White House" again, with her ukelele. And a group of coal miners from a West Virginia mine where twenty-nine people had died a week earlier ascended the stage, wearing their helmets, to complain that cap-and-trade would devastate their industry by raising energy prices and driving out jobs. SENATORS, DON’T SEND OUR JOBS TO ASIA, read one of their signs. "We’re tired of hearing them talk about change," one miner told the crowd. "We don’t need change. We need to take what’s working in America and keep it working."

Ron Paul spoke toward the end, arguing to repeal the Fed ("We’d all be better off," he said), cut all foreign aid, and end the country’s role as policeman of the world. When he began his standard argument against having so many American military bases overseas and in favor of bringing American troops home from Korea and Japan, people toward the back of the crowd began to object. "God bless the military!" they hollered.

Paul moved on to the need to keep our military strong, and the hecklers began cheering again. Then the crowd sang "God Bless America," twice, following along with the words on two JumboTrons on the lawn. On the stage, the whole Tea Party amalgam gathered: the coal miners, Lord Monckton, Ron Paul, Victoria Jackson with her ukulele, the national coordinators from Tea Party Patriots, Dick Armey, and the FreedomWorks staffers.

Matt Kibbe told the people on the lawn that they would see them again at the 9/12 rally in September. Until then, there was work to be done out in the states.

Excerpted from Boiling Mad by Kate Zernike Copyright 2010 by Times Books. Excerpted by permission of Henry Holt and Company.