Accessibility links
Town With Record Oil Spill Celebrates Its History The BP spill in the Gulf of Mexico has the distinction of being the largest offshore oil spill in U.S history -- but the biggest oil spill in the U.S. occurred 100 years ago in Taft, Calif. A gusher shot 200 feet in the air and rained down onto the hills for a year and a half. The spill put Taft on the map -- and every five years the town celebrates its history. 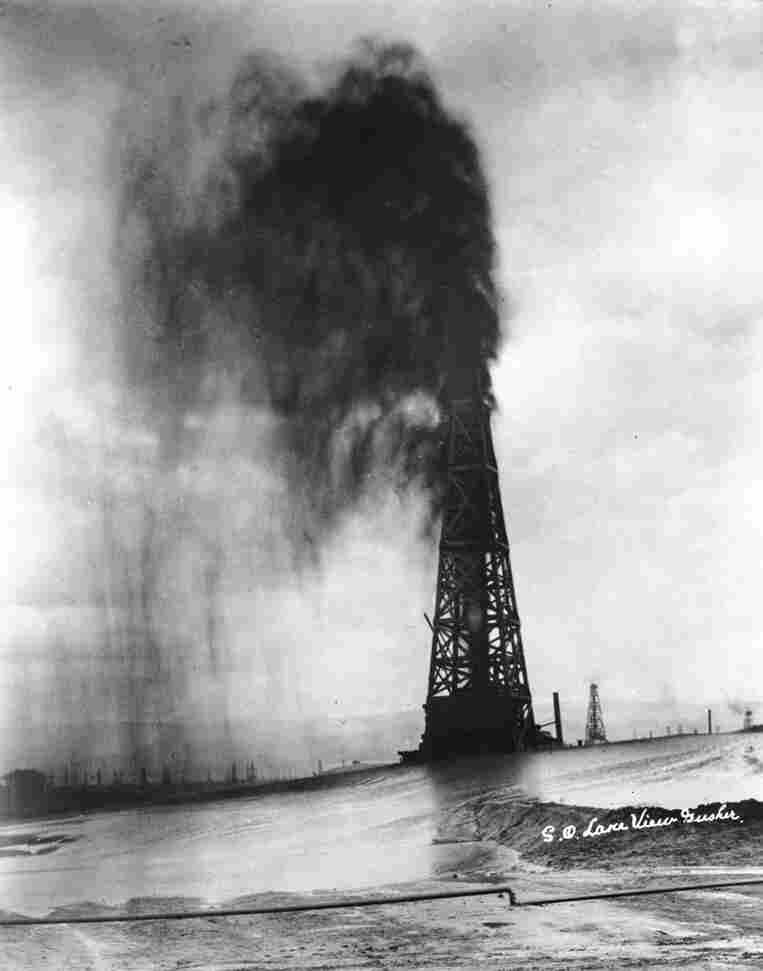 Starting on March 15, 1910, and continuing for a year and a half, the Lakeview Gusher spewed oil onto the land that's now Taft, Calif. Courtesy of the West Kern Oil Museum hide caption

The BP spill in the Gulf of Mexico has the distinction of being the largest offshore oil spill in U.S history. But the biggest oil spill in the U.S. actually occurred 100 years ago in a small California town.

The spill helped found Taft, the city where preparations are under way for the 10-day Oildorado Days festival later this month.

To get an idea of how important oil is to this town of 9,000, visit the Oildorado Days souvenir store. In honor of the centennial observation, it opened early and business is brisk. There are oil-themed Christmas ornaments, coffee cups, key chains, bar stools, posters and puzzles.

"When you look closely at the print, it shows pictures of all sorts of stuff that goes on in the oil industry -- offshore drilling, just different types of valve pumping units," says Cindy Patterson, who shows off some popular apparel.

Held every five years, the Oildorado Days festival honors the town's oil history, which can be traced back to the Lakeview Gusher.

"It blew in on March 15, 1910," says Agnes Hardt of the West Kern Oil Museum. She says the gusher shot some 200 feet in the air and rained down onto the surrounding hills for a year and a half, "night and day."

"Many people have been trying to compare this to the Gulf disaster," she says. "The only problem was no one here ever considered the Lakeview Gusher a disaster."

It was a time when small lakes of oil covering the landscape meant only one thing -- wealth and prosperity.

"During the boomtown days -- the early 1900s -- we had hippodromes, we had opera theaters, we had all kinds of incredible infrastructure here in town," says Eric Cooper, president of the Oildorado festival.

Today, many of the original buildings that oil built are still standing, but they're faint ghosts of their former selves. Only the gleaming art deco marquee of the Fox Theater stands out on this nearly deserted historic part of town.

"Don't judge a book by the cover," Cooper is quick to say. "There is a lot of money here in Taft. And you could very well be talking to a millionaire and don't even know it."

As far as the eye can see, petroleum fields dotted with oil derricks surround the city of Taft. And nearly every pickup truck in the packed parking lot of the OT Cook House & Saloon belongs to an oil company.

'We're Proud Of Our Oildorado'

In eager anticipation of Oildorado Days, a number of men in town have facial hair. With at least two inches of growth underneath his chin, Randy Miller is a serious contender for the festival's Whiskerino contest.

"The men are supposed to grow a beard, and if they don't have a beard and get caught by our sheriff and the sheriff's posse, they'll be arrested and have to buy a Smooth Puss badge to get them out of jail," he says.

And women aren't off the hook. If you're not sporting a ponytail or a bun, he says, you'd be advised to buy a Tessie Garratt badge, named after the matriarch of one of Taft's most prominent families and the first woman to serve on the Taft City Council.

The town recently dedicated a 26,000-pound bronze sculpture as a monument to oil workers. And concern that the town's celebration of oil would be tainted by the images of the BP spill appears to have subsided.

"We're proud of our Oildorado," says Kayla Hillygus, 22, the reigning Oildorado Queen. "We're trying not to pay too much attention to the negatives."

Even the site of the Lakeview Gusher, which spewed millions of barrels of crude, is now covered with sagebrush and has become a tourist attraction.