Accessibility links
Puritan Love: Bellini's 'I Puritani' Though the main characters are devout Puritans, Bellini manages to pack plenty of worldly action into this love story set during the English Civil War. Hear Elvira go mad when her betrothed leaves camp with another woman.

Hear An Introduction To 'I Puritani'

Hear An Introduction To 'I Puritani' 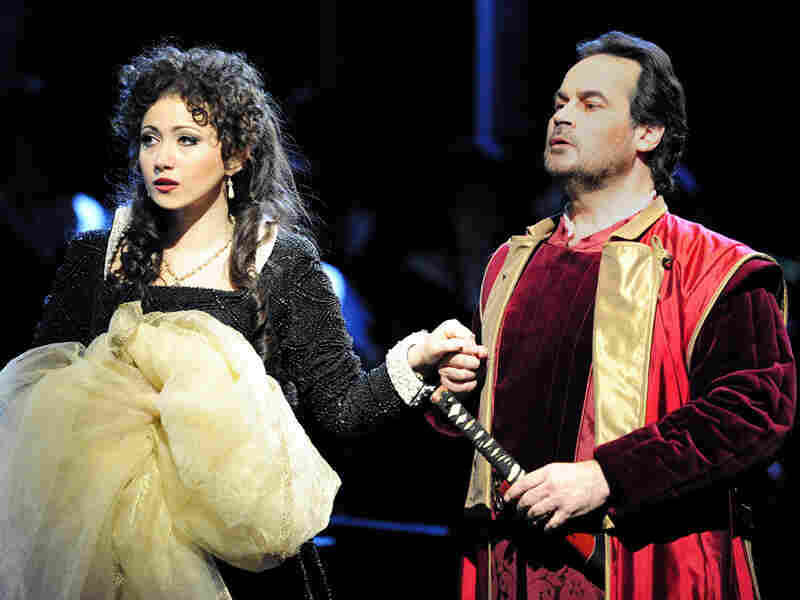 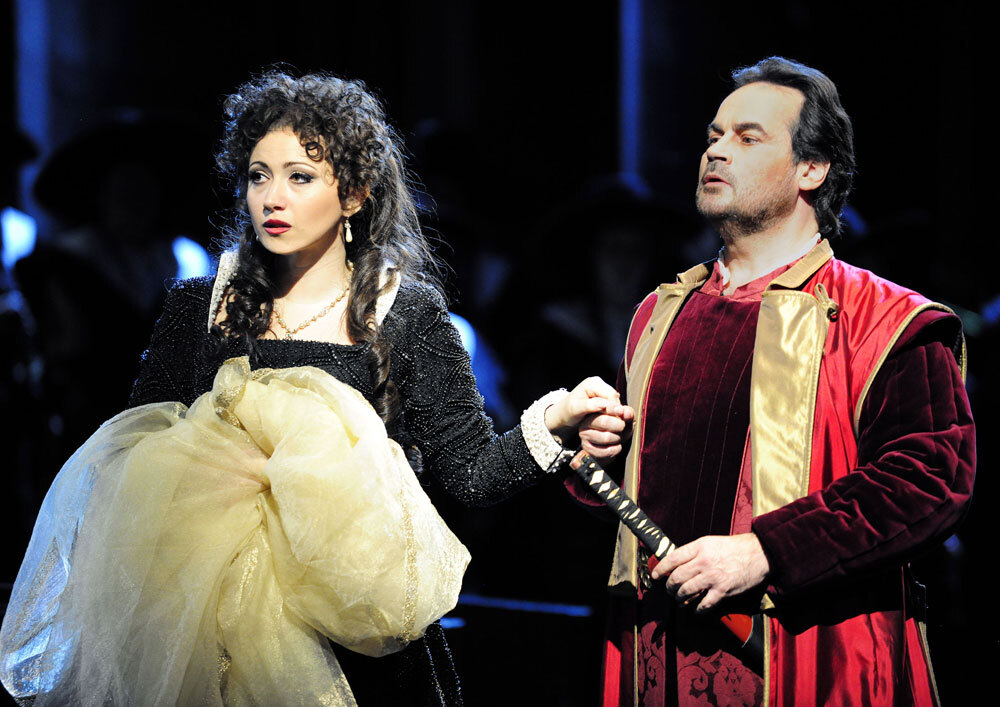 Elvira (Désirée Rancatore) thinks her fiance is cheating on her -- but he's really saving the exiled Queen.

In Bellini's time, madness at the opera usually meant plenty of stratospheric vocal gymnastics, and Elvira's meltdown in Act Two of I Puritani is no exception. In this Vienna production it's sung by soprano Désirée Rancatore.

Given opera's reputation for melodramatic passion and lust-inspired violence, the opera house would seem an unlikely place for a story about dedicated Puritan believers. But that's exactly what we find at the heart of Vincenzo Bellini's final opera, I Puritani.

The duet "Suoni la tromba" -- "Sound the Trumpet" -- sums up the feelings of Riccardo and Giorgio (baritone Mariusz Kwiecien and bass Christof Fichesser) toward the apparently treacherous Arturo. It was first intended for the middle of Act Two but got so much praise in rehearsals that it was turned into the act's finale, to prevent the inevitable ovations and demands for encores from disturbing the opera's dramatic flow.

It's a love story set during the violent conflict between the Royalists and the Parliamentarians, led by the Puritan Oliver Cromwell, during the English Civil War in the mid-17th century. And despite the piety of its main characters, Bellini was determined that his drama should have a vivid, emotional impact. During the opera's development, Bellini grew frustrated with the librettist, Carlo Pepoli, telling him that the opera "must draw tears, inspire terror and make people die, through singing" -- and suggested that Pepoli should carve those ideas in his head.

I Puritani premiered in Paris in 1835, just months before Bellini's death. But unlike the final operas of many other great composers, it's not a contemplative drama, reflecting the thoughtful perspective of an aging artist. Bellini died of intestinal inflammation when he was just 33 years old, at the height of his creative energy.

Bellini had moved from Italy to France in 1833, and after observing the musical scene in Paris, he concluded that while French composers made skillful use of the orchestra, they had "little understanding of real song." So, in writing his first Parisian opera, he may have been teaching a sort of lesson in lyricism. He said that he devoted "indescribable care" care to I Puritani, and the opera features a lengthy string of Bellini's finest numbers.

On World of Opera, host Lisa Simeone presents a production of I Puritani from the Vienna State Opera. It features a must-hear performance by soprano Désirée Rancatore in the high-flying role of Elvira, a young Puritan woman who falls for a Royalist cavalier, with tenor José Bros as her beloved, Arturo.

The Story of 'I Puritani' 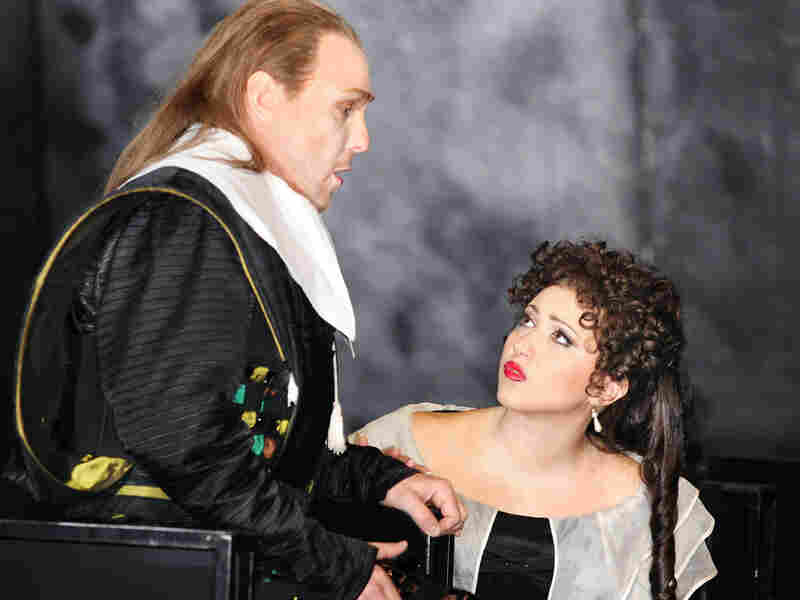 In Bellini's 'I Puritani,' a love story is set against the raging English Civil War. Zeininger/Wiener Staatsoper hide caption 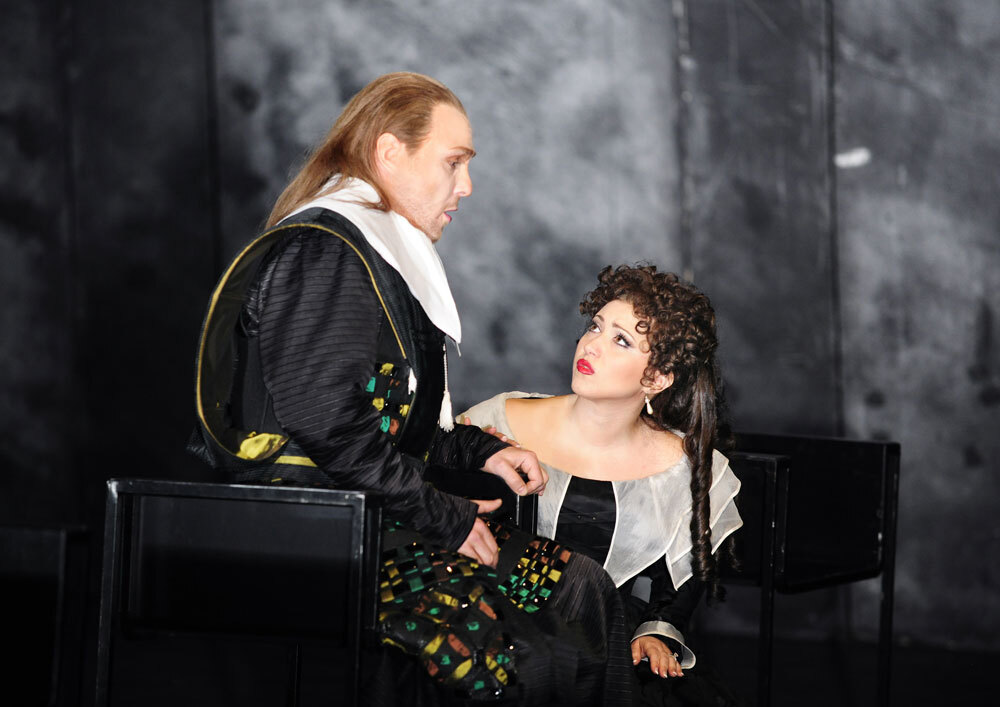 In Bellini's 'I Puritani,' a love story is set against the raging English Civil War.

The opera takes place in the mid-1600s, during the English Civil War -- a conflict between the Royalist supporters of King Charles I, called the Cavaliers, and the rebellious Parliamentarians and Puritans. The Puritans were often called "Roundheads" -- probably because they disdained the showy hairstyles of the time, and instead wore their hair closely cropped.

As the action begins, Charles has already been executed by the revolutionary Roundheads, but battles are still raging. ACT ONE opens at a Puritan fortress near Plymouth. The soldiers are anticipating final victory over the Royalists, and everyone is also looking forward to the wedding of Elvira, daughter of the local governor-general, Lord Walton.

But in the next scene, Elvira herself is worried. She has agreed to marry the Cavalier Arturo, a Royalist sympathizer, but she's afraid that her father will intervene, forcing her to marry the Puritan officer Riccardo instead. But her uncle, Walton's brother Giorgio, assures her that her father has consented to her wishes.

In the act's final scene Arturo arrives, bringing an elaborate wedding veil for Elvira. But as the ceremony approaches, there's a distraction. Walton's men have taken a Royalist prisoner, a woman they suspect is a spy. Arturo is left alone with her, and discovers her true identity: She's Queen Henrietta Maria, the widow of King Charles.

Arturo vows to save her, but their discussion is interrupted when Elvira runs in, wearing her bridal veil. Playfully, she shows it off by placing it on Henrietta's head -- which gives Arturo an idea.

Elvira leaves, and he decides to disguise the queen with the veil, and help her escape. But on their way out they're caught by Riccardo. He pretends to be sympathetic, and lets them go. But soon after, he sounds the alarm and sends his troops off in pursuit.

When Elvira hears that Arturo has fled with another woman, she assumes that he has betrayed her. The act ends as the others express contempt for Arturo, and sympathy for Elvira, who is sounding a bit unhinged.

As ACT TWO begins, Elvira gone over the edge. In a hall at the Puritan fortress, Giorgio describes Elvira's pathetic state -- how she's wandering aimlessly, with her hair in tangles, and wearing crude garlands of wildflowers.

Riccardo enters and announces that Arturo has been condemned to death. He's to be captured, and brought back for execution.

Elvira is heard outside and when she enters the hall, saying she can still hear Arturo's voice, Giorgio and Riccardo are distraught by her pathetic condition. In a vivid mad scene, she first tries to comfort the two men, and then has a rapturous vision of Arturo.

When Elvira is gone, Giorgio tries to exploit Riccardo's love for her, telling him that she'll never survive Arturo's death. At first Riccardo seems unmoved. He eventually agrees to spare Arturo but in a rousing duet that closes the act, both men agree that if Arturo is caught siding with the Royalists, he'll face execution.

At the start of ACT THREE, the fugitive Arturo has quietly entered the garden outside Elvira's rooms, and hears her inside, singing a song that he once taught her. Risking capture, he begins singing the same song.

Elvira hears him and comes outside. When she recognizes him, her sanity seems to be restored. They remember the happy times they had together and the pain of their separation. And Arturo explains why he fled the fortress with another woman -- he was helping a condemned prisoner to escape.

Then, the sound of a military drum upsets Elvira. She again loses her sense of reality, and cries out for help. That brings Riccardo and Giorgio to the garden, along with a group of soldiers. Finding Arturo, the soldiers immediately seize him and call for his execution.

Hearing the death sentence brings Elvira back to her senses. Arturo says that he still loves her, and Elvira says she's willing to die at his side. Unmoved, the soldiers want to kill Arturo immediately, while Riccardo and Giorgio call for mercy.

As the men argue, a horn sounds and a messenger appears. He announces that Cromwell, the Puritan leader, has defeated the Royalists, and that a general amnesty has been declared. At that news, Arturo is freed. He embraces Elvira, and the gathering crowd wishes them happiness as the opera ends.