Accessibility links
Fenty Lesson: Mayors May Pass On School Reform The Washington, D.C., mayor isn't losing his job because he pushed hard to close schools and hold teachers accountable. But it was a factor. Other cities' leaders will take note, particularly if politicians decide that a hard-charging attack against the educational status quo is a political loser. 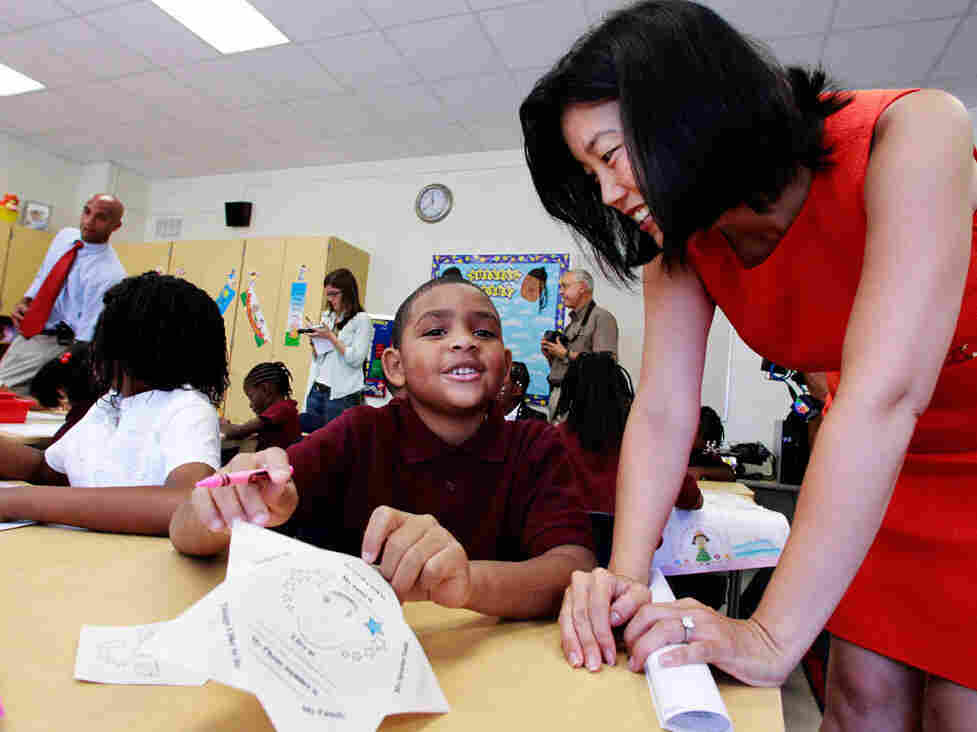 Education isn't the only reason Adrian Fenty is losing his job as mayor of Washington, D.C., after just one four-year term. But it didn't help him.

And Fenty's defeat in Tuesday's Democratic primary may reverberate far beyond the District, if politicians decide that a hard-charging attack against the educational status quo is a political loser.

"School reform, done aggressively, is not politically popular," says Michael J. Petrilli, vice president of the Fordham Institute, a conservative education think tank. "At least not in the short term."

The fight over schools seemed to be a reflection of voters' qualms about Fenty in general, which were based on complaints that he was too autocratic. A Washington Post poll last month found that 54 percent of African-American Democrats thought Rhee's performance was a reason to vote against Fenty, compared with a quarter who thought her efforts were a reason to support him.

"Americans support the idea of school reform in theory," Petrilli says. "We're not as sure about school reform when it's real, when we're shutting down schools and firing teachers."

That a mayor should lose office at least in part because of school management issues is ironic. One of the selling points of giving mayors control over schools -- they are generally run by independently elected school boards -- is to insulate superintendents from political pressure.

Big-city superintendents are lucky to last five years on the job. Those who push aggressive overhaul efforts often are shown the door even earlier. They draw opposition from teachers unions and other groups who hold big sway over low-visibility school board elections.

"The entire idea, essentially, was that you break the cycle of regular turnover of superintendents if you have mayoral control," says Timothy Daly, president of the New Teacher Project, an organization -- founded by Rhee -- that places teachers with nontraditional backgrounds into schools.

"The assumption in most places is that the mayor is going to be around for a while," Daley says.

Long-serving mayors such as Michael Bloomberg of New York and Thomas Menino of Boston have been able to shield superintendents from much of the political heat generated by the broad changes they've pushed.

The question in the wake of Fenty's defeat is whether mayors will decide protecting controversial subordinates is worth the risk. "The worry is that any mayor is going to look at this and see that school reform is too hot to touch, particularly in an urban setting," Petrilli says. "I don't think that narrative is true, but I do worry that it could spread."

For her part, Rhee told NPR's Claudio Sanchez Wednesday that she sees no need for the changes that have been made in Washington "to be rolled back" and that leaders in many other cities will not view what's happened to Fenty as a reason to go slowly.

Other Reasons For Fenty's Loss

Adrian Fenty, 39, became Washington's youngest-ever mayor when he was elected in 2006, but he lost favor with voters. Along with the friction caused by his administration's efforts on education, some criticized him for his management style, calling him arrogant and not inclusive.

Polls showed that Fenty, who is biracial, was particularly unpopular with black voters, who make up approximately half of the city's 600,000 residents. Voting Tuesday had a strong racial cast.

Fenty won in largely white areas of the city while voters in the virtually all black northeast and southeast sections strongly backed Gray, 69, who is black.

But the issue of whether mayors and other elected officials might be less apt to push hard on changes to the way schools are run is a particularly acute matter in Chicago, where Mayor Richard M. Daley was handed control of the schools in 1995 by the state Legislature. He has fostered a series of accountability measures that are now being promoted nationally by his former schools chief, Arne Duncan, who is serving as President Obama's education secretary.

Chicago mayors prior to Daley did their best to avoid dealing with schools because their problems were too ingrained and too difficult, says Paul M. Green, director of the School of Public Policy at Chicago's Roosevelt University.

With Daley stepping down, it's not clear whether the candidates to succeed him next year will embrace his model of education management. The question of what to do is sure to be atop the campaign agenda. "Education is going to be one of the top two issues in the race," says Illinois state Sen. James T. Meeks, a likely candidate in the mayoral race.

In Need Of Improvement

Chicago schools are clearly better run than they were before Daley took them over. They function far better, in terms of management issues such as producing budgets and avoiding strikes.

But, as in most big cities where hard-charging superintendents have been charged with shaking things up, it's hard to call the schools a success. The Chicago Tribune reported last week that the district's own internal grading system shows a quarter of the city's elementary schools and more than 40 percent of the high schools are "failing."

"Whereas it is thought nationally that Chicago has done a great job on school reform, in actuality we have not," Meeks says. "Most elected officials in the city of Chicago would not send their children to our school system."

Meeks pledges to continue pushing for a voucher program that was narrowly defeated in the state Senate this year. But Green points out that even the changes that Daley has pushed have run into considerable opposition, despite the enormous stature he has lent to his own superintendents.

Efforts to revamp schools by changing principals and replacing teachers have been hard sells, even on campuses where fewer than 10 percent of students are testing at grade level.

"Even if it's a terrible school with a terrible graduation rate, no [facility] gets closed and no one gets fired," says Green. "That's the problem with school reform. Everyone can talk about it, but once you start it you run up against the teachers union and everyone else."

That's the price Fenty paid. But in Washington, where the political peril of messing with the educational status quo has just been amply demonstrated, Fenty's agenda may well live on long after him.

Gray has supported both the idea of mayoral control and many of the ideas that Rhee has championed, even if he questioned the "tone" and "pace" of her approach. Rhee recently finalized a contract with the teachers union that will enshrine many of her ideas -- and a $75 million grant the District was recently awarded by Duncan and the Department of Education is riding on continuing her plan.

Still, there's likely to be a new tone in Washington as a result of Fenty's defeat. "It's not so much the policies that are going to matter at this point as the leadership," says Petrilli, of the Fordham Institute.

"Will principals feel like they can actually move to terminate ineffective teachers?" he asks. "It's that kind of stuff that is at risk of bouncing back to the old ways."