Accessibility links
Support For Iraq's Maliki Puts U.S., Iran In Same Camp There are signs of progress in Iraq's long political stalemate. Momentum is building behind a coalition being formed by current Prime Minister Nouri al-Maliki and two countries that don't often agree are supporting him: America and Iran. 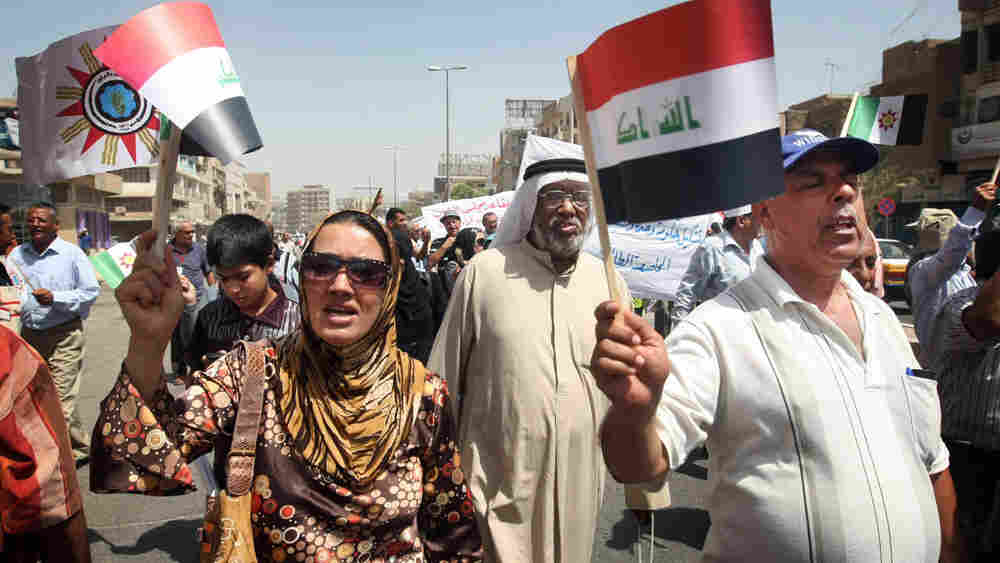 Hundreds of Iraqis march through Baghdad on July 14, calling for the formation of a government after national elections in March. Now, signs of progress are emerging. Ahmad Al-Rubaye/AFP/Getty Images hide caption 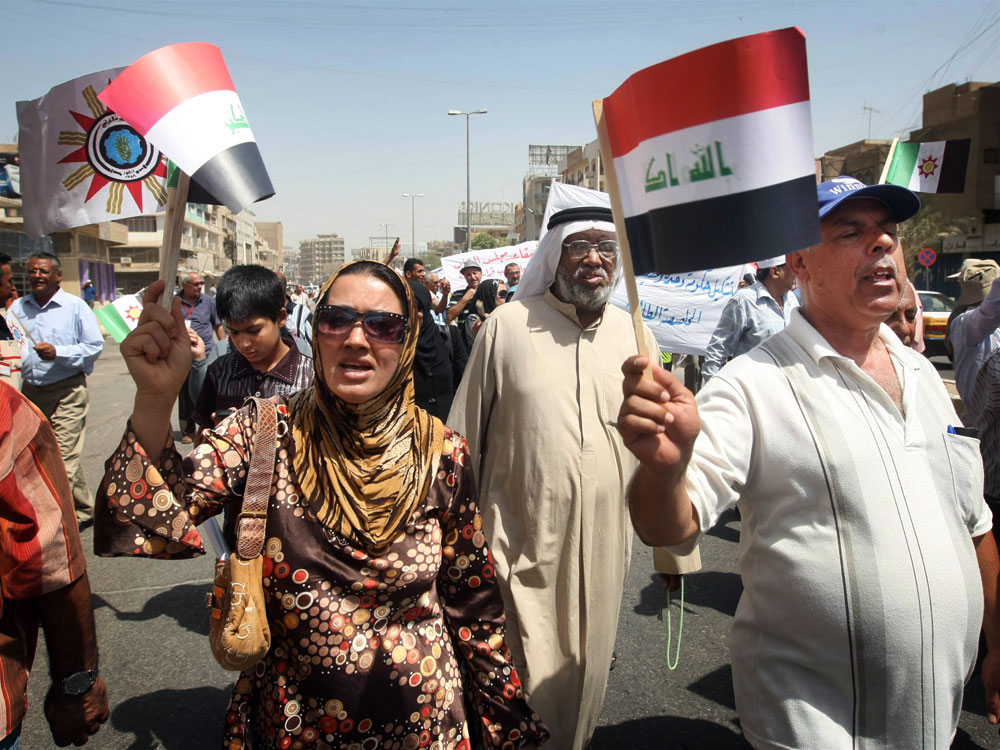 Hundreds of Iraqis march through Baghdad on July 14, calling for the formation of a government after national elections in March. Now, signs of progress are emerging.

There are signs of progress in Iraq's more than six-month political stalemate.

Current Iraqi Prime Minister Nouri al-Maliki is beginning to shore up support for a coalition he has formed in order to remain in the top job for a second term -- despite the fact that his party lost by a narrow margin in parliamentary elections March 7.

Maliki's list of supporters includes two countries that don't often find themselves on the same team: the U.S. and Iran.

Shiite-majority Iran originally backed the Shiite political bloc called the Iraqi National Alliance. But that bloc so far has failed to present a candidate who can get widespread support.

Now Maliki is proposing to join the Alliance and share power with its members. This super-Shiite bloc could assemble almost enough seats in parliament to form a government. 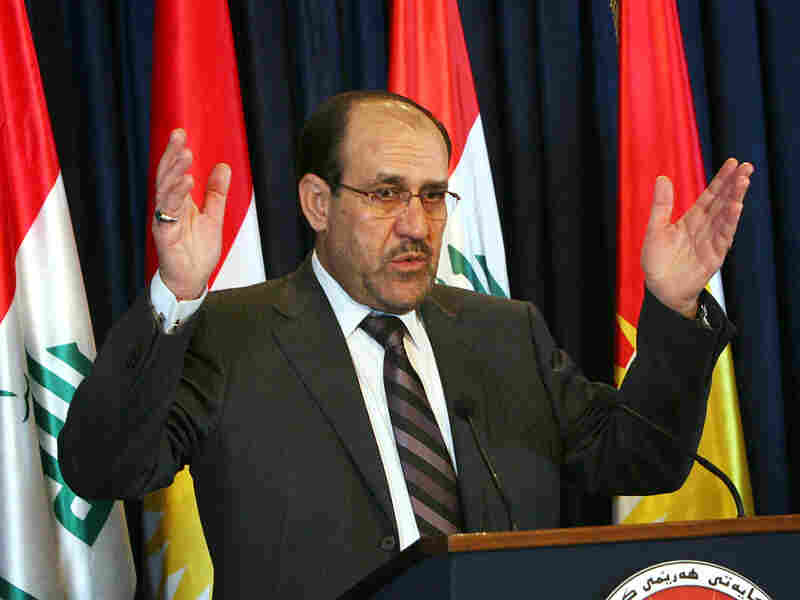 Iraqi Prime Minister Nouri al-Maliki speaks during a joint news conference Aug. 8 in the northern Iraqi city of Irbil. Maliki has the backing of both Washington and Tehran to hold on to his job, six months after an election in which his party narrowly lost. Safin Hamed/AFP/Getty Images hide caption 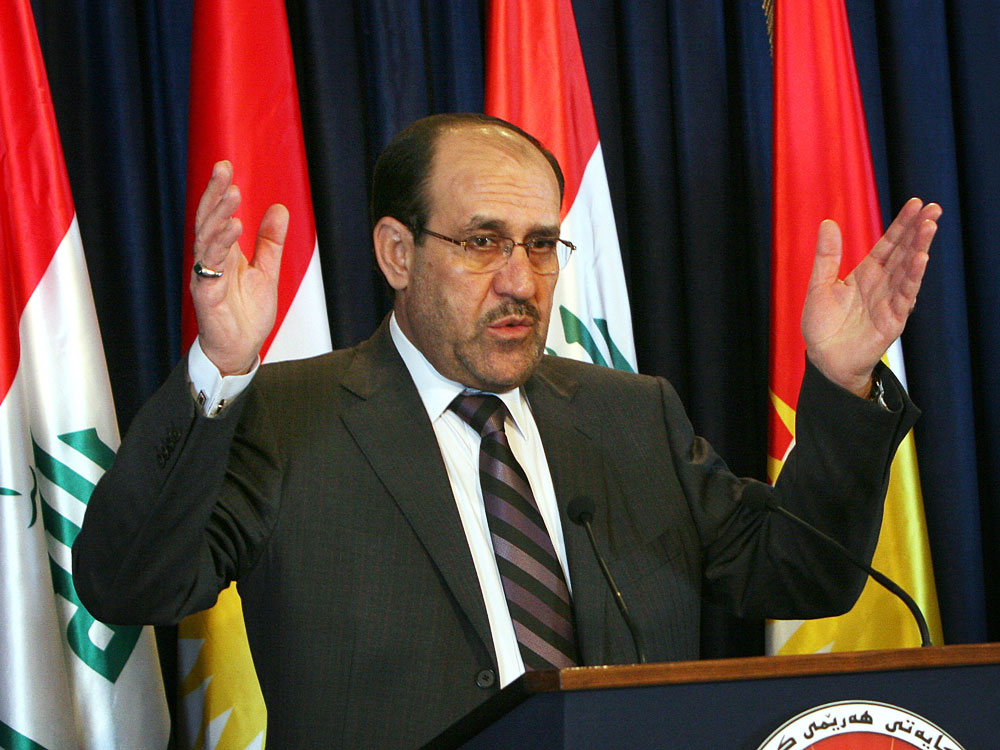 Iraqi Prime Minister Nouri al-Maliki speaks during a joint news conference Aug. 8 in the northern Iraqi city of Irbil. Maliki has the backing of both Washington and Tehran to hold on to his job, six months after an election in which his party narrowly lost.

Iran hasn't publicly said it's happy with this arrangement, but media reports in Iraq are beginning to suggest that a super-Shiite victory is all but inevitable.

Thair Feely, a member of Maliki's party, says Iran is no longer playing the spoiler role in Iraq, especially now that American troops are leaving.

"I believe Iran changed their policy toward Iraq," he says. "And I think they're looking for more stability in Iraq. A nonstable Iraq will affect them as well."

U.S. officials also want a stable Iraq. They don't publicly back a candidate, either.

Privately, though, they've long been pushing for Maliki to stay in the top job as long as he shares some power with his main rival in the election, Ayad Allawi, a secular Shiite who has the backing of the country's Sunnis. American officials say they want a government that represents all Iraqis.

The American plan would put Allawi in charge of a new national security council that would set and review policy on security, the national budget and oil exports.

But there's no guarantee that Allawi will accept such a post. And if he does, many doubt that the council would wield any real power, says Allawi spokesman Rahim al-Shammari.

"It's only an advisory council, so its resolutions aren't binding," he says.

Who Has More Influence?

Joost Hiltermann, an Iraq analyst with the International Crisis Group, says that doesn't mean Iran and the U.S. ultimately have the same goals.

"The person of Maliki is less important to both the United States and Iran," he says.

"What's important to Iran is that [the prime minister] be a Shiite from the Shiite Islamist parties. And what's important to the United States is that if it is such a person -- and they will accept that -- that the power be somewhat reduced, in order to give the Sunnis a real and concrete, material sense of power," he says.

Whether this American version wins out, Hiltermann says, depends on which country has more influence in Iraq.

But that story has yet to play out, even behind the scenes.

Cynicism Within, Progress Without

Parsing out what's happening in Iraqi politics can at times be like trying to read between the lines of an Iraqi play.

In one recent performance of a production whose title translates roughly to "Laughter, Playfulness, Seriousness and Love," the commentary is biting. A member of parliament gives a speech with grammatical errors. The implication is that politicians are illiterate and stupid.

Later, he appears to be shocked to hear that an Iraqi family only gets a few hours of electricity each day. The underlying meaning? Politicians are disconnected from the people.

This kind of cynicism is the norm in Iraq these days, especially as negotiations to form a government drag on.

Outside Iraq, though, things do seem to be progressing.

Iran's apparent shift coincided with a visit to Syria last week by one of Maliki's senior negotiators. On the surface, it looked like a thawing in what recently were tense relations between Iraq and Syria.

What it really means is that Iraq's neighbors are starting to support Maliki and his bid for a second term, Feely says.

"There is major change in our neighbor's policy. That's what we saw," he says. "We welcome that."