Accessibility links
Pope Admits Abuse Scandal Failures During U.K. Visit Pope Benedict XVI says the Catholic Church failed to act decisively or quickly enough to deal with abusive priests and said the top priority was to help victims. The pope's first meeting during his controversial four-day trip was with Queen Elizabeth II, head of state and of the Church of England. 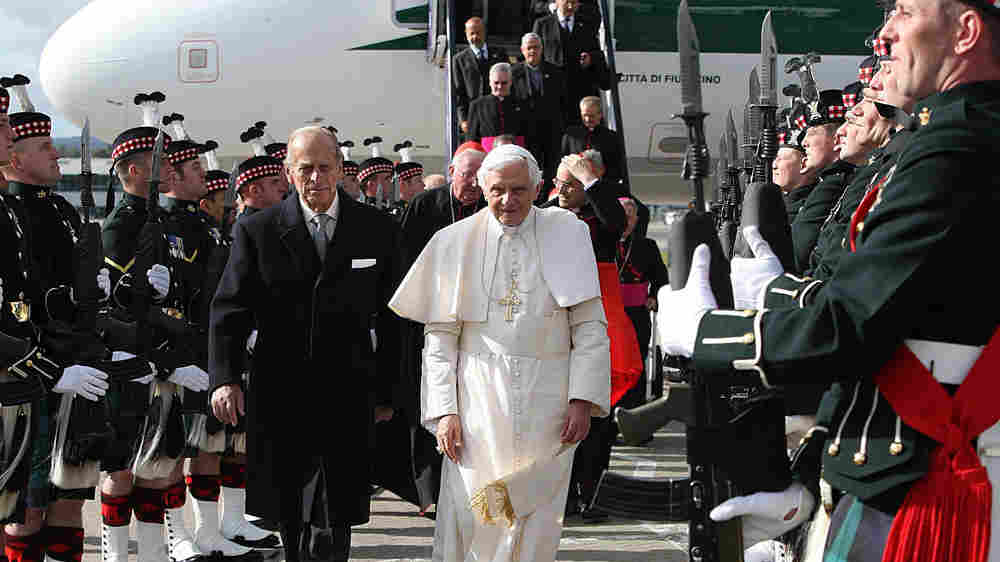 Pope Benedict XVI is met by Prince Philip, the Duke of Edinburgh, as he arrives in Scotland on Thursday to begin the first papal state visit to the U.K. Andrew Milligan/AP hide caption 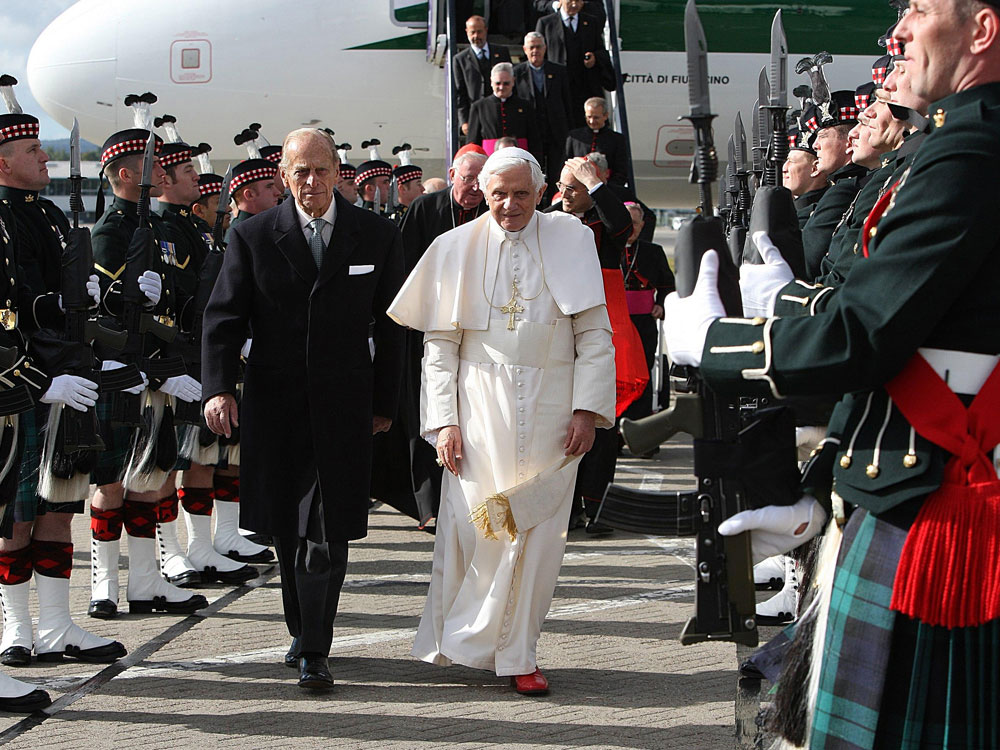 Pope Benedict XVI is met by Prince Philip, the Duke of Edinburgh, as he arrives in Scotland on Thursday to begin the first papal state visit to the U.K.

Pope Benedict XVI began the Vatican's first-ever state visit to Britain on Thursday by addressing the controversy over the Roman Catholic Church's handling of the clergy sex abuse scandal.

Speaking in Italian to reporters on board a flight to Scotland, the pope acknowledged that the church failed to act decisively or quickly enough to deal with cases of child rape and molestation by priests that have spanned decades and involved tens of thousands of victims. 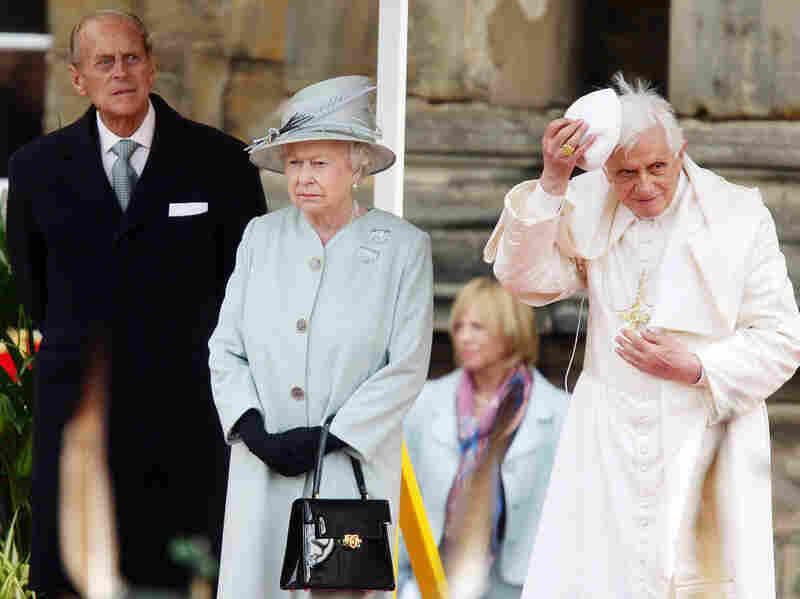 Pope Benedict XVI replaces his "zucchetto" as he meets with Britain's Queen Elizabeth II and Prince Philip on Thursday at Holyroodhouse Palace in Edinburgh, Scotland, at the start of a historic four-day state visit. Dave Thompson/AFP/Getty Images hide caption 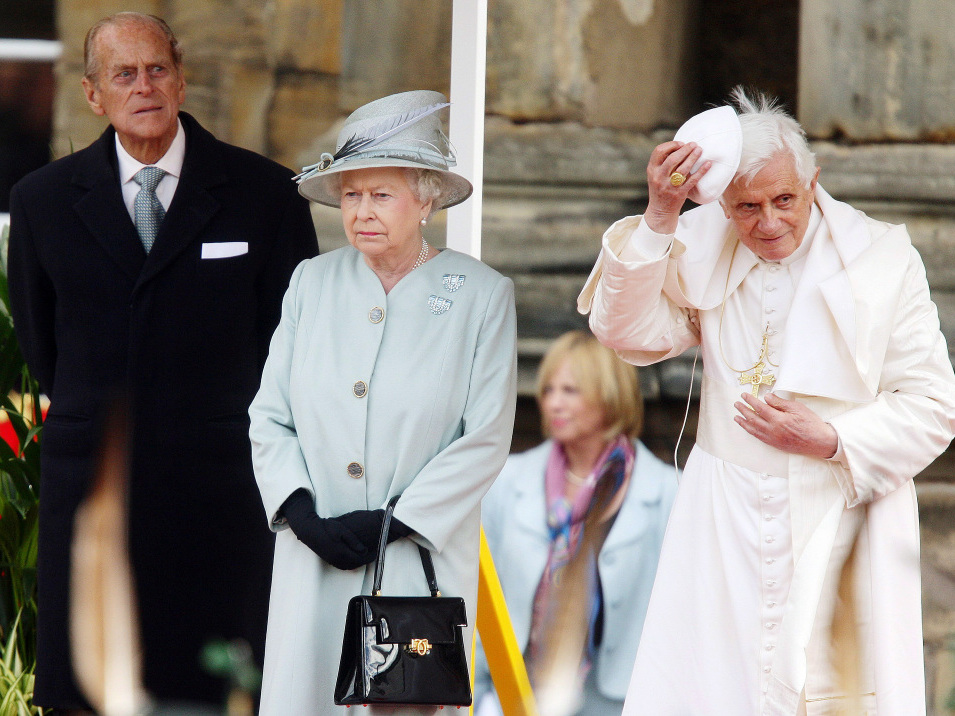 Pope Benedict XVI replaces his "zucchetto" as he meets with Britain's Queen Elizabeth II and Prince Philip on Thursday at Holyroodhouse Palace in Edinburgh, Scotland, at the start of a historic four-day state visit.

Benedict, who led the Vatican office that investigated child abuse claims during Pope John Paul II's papacy, said he was shocked and saddened on learning of the scope of the abuse partly because priests take vows to be Christ's voice upon ordination.

"It's difficult to understand how a man who has said this could then fall into this perversion. It's a great sadness," Benedict said. "It's also sad that the authority of the church wasn't sufficiently vigilant, and not sufficiently quick or decisive to take necessary measures" to stop it.

Victims of the abuse are the church's top priority as it tries to help them heal spiritually and psychologically, he added.

The pontiff was greeted by the sound of thousands of bagpipers upon arrival in Scotland, where he met with Queen Elizabeth II and Prince Philip on the first stop of his four-day visit to the United Kingdom. Benedict, sporting a green tartan scarf, traveled through the capital city of Edinburgh in his armored Popemobile, greeted by a crowd of about 125,000 well-wishers.

"I've brought my wee girl Laura to see the pope," said James Hegarty, a 42-year-old unemployed Edinburgh resident. "She's only 4, but it's a once in a lifetime chance to see him."

The queen, who is both head of state and head of the Church of England, told Benedict during their meeting at the Palace of Holyroodhouse that his visit reminded all Britons of their common Christian heritage. She said she hoped relations between the Anglican Church and the Catholic Church would be deepened as a result.

"We know from experience that through committed dialogue, old suspicions can be transcended and a greater mutual trust encouraged," the queen said. "We hold that freedom to worship is at the core of our tolerant and democratic society."

The pope, too, noted Catholics' and Anglicans' shared heritage and spoke of wanting to extend a "hand of friendship" to the British people during his trip. Benedict said the queen's forefathers' "respect for truth and justice, for mercy and charity come to you from a faith that remains a mighty force for good in your kingdom."

The pope's trip has been overshadowed by a new round of revelations in Belgium of hundreds of new victims allegedly raped and molested at the hands of priests, at least 13 of whom committed suicide. The news has further shaken Britain's own 5.3 million Catholics and helped energize a secular crusade against the Church and the pontiff's visit.

After meeting with the queen, the pope later delivered a speech in which he suggested that Nazism was spurred on by "atheist extremism."

"As we reflect on the sobering lessons of atheist extremism of the 20th century, let us never forget how the exclusion of God, religion and virtue from public life leads ultimately to a truncated vision of man and of society and thus a reductive vision of a person and his destiny," Benedict said.

That garnered a swift reaction from Andrew Copson, chief executive of the British Humanist Association.

"The notion that it was the atheism of Nazis (who were mostly not atheists in any case) that led to their extremist and hateful views or that somehow fuels intolerance in Britain today is a terrible libel against those who do not believe in god," Copson said in a statement on the BHA's website.

Nobody loses face by saying 'sorry' and 'I'm trying to do better.'

The organization is one of several groups in predominately secular Britain that have organized protests against the pope's visit. T-shirts declaring "Pope Nope" also have been spotted around London.

"This visit should never have happened. We stand here against these abusers. This is a waste of taxpayers' money," Paisley said.

Security costs for the papal visit is costing taxpayers an estimated $18.7 million at a time of austerity measures and job losses, which has drawn the ire of British media.

Human rights advocate Peter Tatchell called the Church's views on birth control, homosexuals and equality of the sexes both "shocking [and] extreme."

Benedict acknowledged the opposition, saying Britain had a "great history of anti-Catholicism. But it is also a country with a great history of tolerance." He said he expected a warm welcome from Catholics and other believers and "mutual respect and tolerance" among those with anti-Catholic sentiments.

"I go forward with much courage and joy," he said.

Benedict's trip to Britain is considered a state visit because he was formally invited by the monarch. It is the first such visit by a pope to the U.K., and his meeting with the queen is symbolically significant because of the historic divide between the officially Protestant nation and the Catholic Church.

Britain split acrimoniously from Rome in the 16th century, a division followed by centuries of anti-Catholic sentiment. The visit also coincides with the 450th anniversary of the Reformation in Scotland.

The last pastoral visit to Britain was in 1982 by Benedict's predecessor, John Paul II, who was received warmly and enthusiastically.

Only 65,000 of the faithful are expected to attend an open air Mass at Bellahouston Park in Glasgow later Thursday -- far fewer than the 100,000 that the Vatican had originally anticipated. By contrast, John Paul II pulled in a crowd of 250,000 for Mass at the same park.

Benedict is scheduled to attend a beatification event Sunday for Cardinal John Newman in Birmingham, which will see the 19th-century English philosopher take a step on his way to sainthood.

NPR's Philip Reeves reported from London for this story, which contains material from The Associated Press.