Accessibility links
This Too Shall Pass: Avoid Kidney Stones Through Diet There are lots of surgical interventions for kidney stones. But recent evidence suggests that a few dietary changes -- including eating more calcium-rich dairy -- may reduce the risk of developing stones.

There are surgical interventions to treat kidney stones, but when it comes to prevention, diet may be key. One new study finds that a diet rich in plant-based foods and low-fat dairy may help decrease the risk of developing kidney stones. 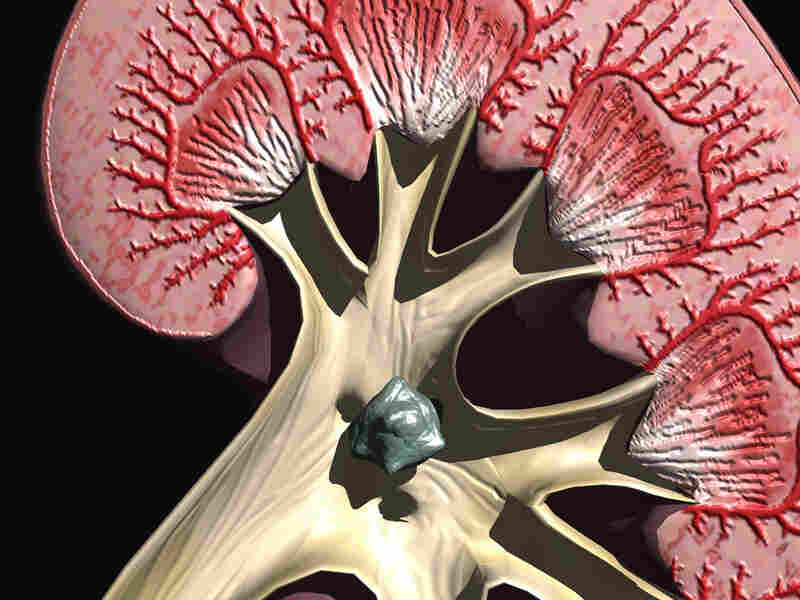 This computer illustration shows a kidney stone in the renal pelvis. Although a major component of kidney stones is calcum, a new study shows that a calcium-rich diet may help inhibit their development. 3D Clinic/Getty Images hide caption 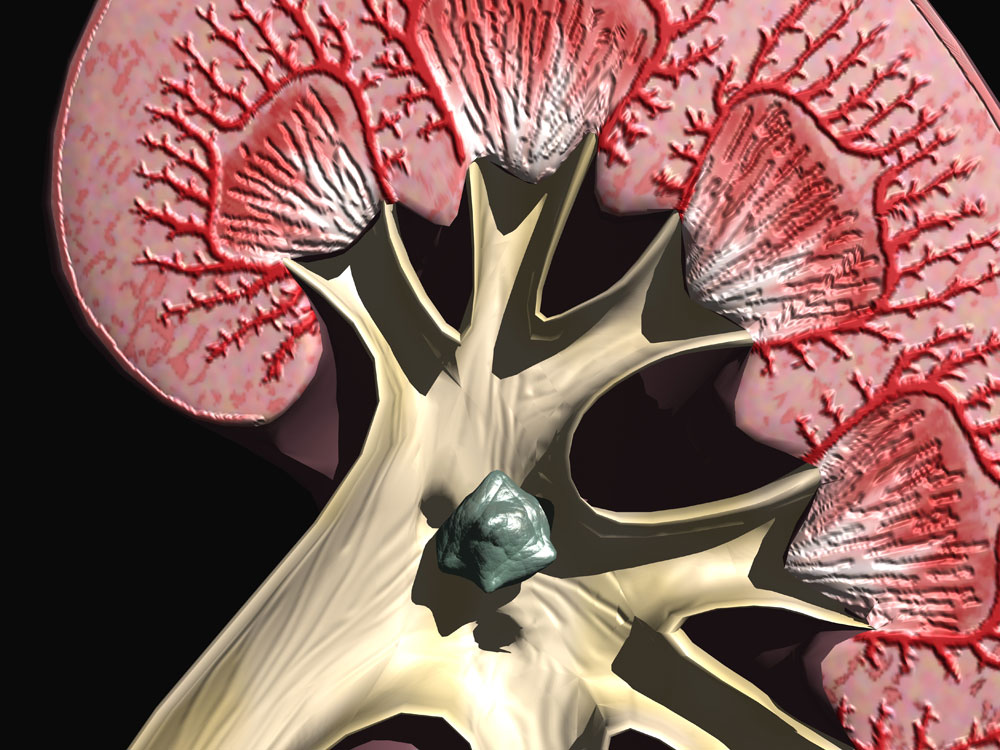 This computer illustration shows a kidney stone in the renal pelvis. Although a major component of kidney stones is calcum, a new study shows that a calcium-rich diet may help inhibit their development.

Many patients who've passed a kidney stone say the pain is excruciating. And David Goldfarb, a nephrologist at New York University, says he feels his patients' pain. Goldfarb had his first stone in his late 20s, and he remembers it as if it were yesterday.

"I was walking down the street when I was suddenly accosted by this tremendous pain. It felt like a large chef's knife had been stuck in my back," Goldfarb says. "And I was doubled over, soaked through my clothes sweating."

A dramatic day in the ER followed. But once the stone passed, Goldfarb says, he -- like most people -- forgot about it. Very few people take steps to prevent a repeat attack, but he says most kidney stone sufferers will form another stone within 10 years.

"Most people with relatively small stones that passed the stone in the emergency room as I did forget about it -- don't follow a diet, don't drink more water," Goldfarb says. "And that's why kidney stones are so recurrent."

After his second attack Goldfarb says he began drinking lots of fluids. To this day, he keeps a water bottle in hand as he sees patients. This strategy has really helped him. And there is lots of evidence that fluid intake is very effective in staving off recurrent kidney stone attacks.

The evidence on diet is just beginning to accumulate. The most recent study published in Clinical Journal of the American Society of Nephrology suggests that calcium-rich foods -- such as low-fat milk and yogurt -- can be protective. This may seems a bit odd -- given that kidney stones are partially formed by calcium.

"It is a little bit counterintuitive, maybe, that actually higher intakes of dietary calcium are associated with a reduction in kidney stone risk," says Dr. Eric Taylor, a kidney specialist at Brigham and Women's Hospital in Boston.

The theory is that dietary calcium binds with a waste product in the gut called oxalate. The two substances stick together, crystallize and exit the body long before there's a chance to form kidney stones.

The latest study suggests that it's not just calcium-rich dairy that's beneficial. There's a whole pattern of eating that's linked to reduced risk.

Taylor analyzed the diets of 3,426 people with and without kidney stones. All the individuals had been enrolled in long-term studies that tracked their eating habits over many years. He was particularly interested in people whose diets most resembled the Dietary Approaches to Stop Hypertension, or DASH, diet. The DASH diet, which is similar to a Mediterranean-style diet, was developed decades ago to help people lower blood pressure.

Taylor says the people who adhered most to this pattern of eating were significantly less likely to develop kidney stones.

"We found a decrease in risk in the order of around 40 or 45 percent," says Taylor. "We were very excited by it."

One simple explanation is that a diet rich in fruits in vegetables increases fluid intake, which is known to be beneficial. It's also possible that unidentified compounds in plant foods or dairy products may inhibit the formation of kidney stones.

The new study is no assurance that people prone to kidney stones will be able to prevent them through diet alone. Some people with recurrent stones choose to take prescription diuretics to reduce the risk. What's important, say experts, is that patients have multiple strategies to help prevent recurrent attacks.