Accessibility links
T. Rex Renaissance: Big Decade For Dino Research This year scientists have identified six new species of the animal. Scientists say the T. rex discoveries are partly due to new techniques and partly due to its telegenic charisma -- one that even scientists are not immune from. 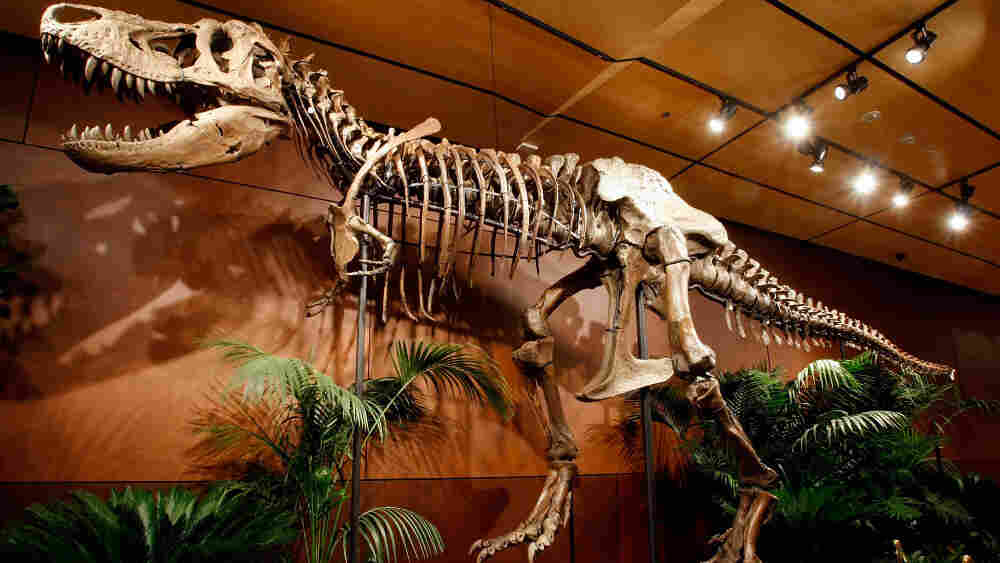 Archaeologists have unearthed a wealth of new information about dinosaurs in the past decade thanks in large part to new technology.  But the T. Rex's telegenic charisma and popular appeal are something that even scientists aren't immune from. Ethan Miller/Getty Images hide caption

It's been a big year for a big dinosaur: Tyrannosaurs rex. Scientists have identified six new species of the animal, recently discovered T. rex feathers and maybe even the remains of some soft tissue.

What I find really interesting is what you can do with sort of an eclectic and diverse group of scientists all focused on one animal.

Scientists say the T. rex renaissance is partly due to new techniques and partly due to its telegenic charisma -- one that scientists are not immune from.

"I would love to see [a] hunting T. rex," says Tom Holtz, a paleontologist at the University of Maryland. In between writing sober, clinical studies of carnivorous dinosaurs, he sometimes gets carried away.

"Tyrannosaurs are sort of bruiser skulls, these deeply rooted thick teeth and so forth, but these dinky little forelimbs," he says. "So it appears that they are just grabbing on with their jaws, crunching down, crushing through meat, crushing through bone, twisting and tearing and ripping out big chunks of flesh."

That's just the way the T. rex did it in the first Jurassic Park movie, for example, when eating the lawyer -- among my own favorite scenes.

This week, a group of scientists has published a paper in the journal Science laying out all the fun things they've recently learned about the capo di capi of carnivores. Among them is Mark Norell, curator of fossil reptiles at the American Museum of Natural History in New York City. 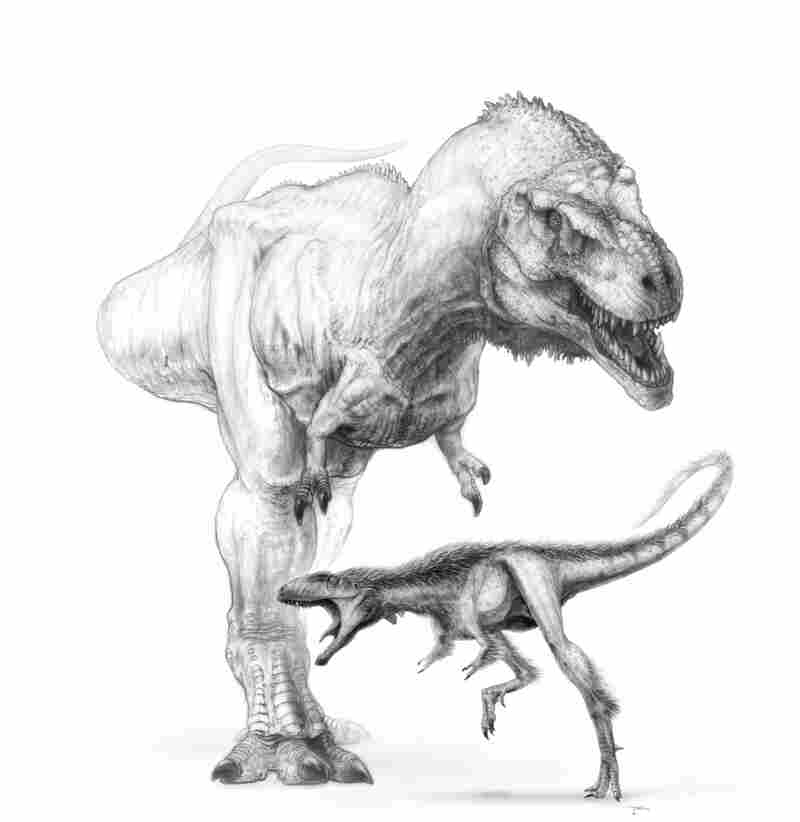 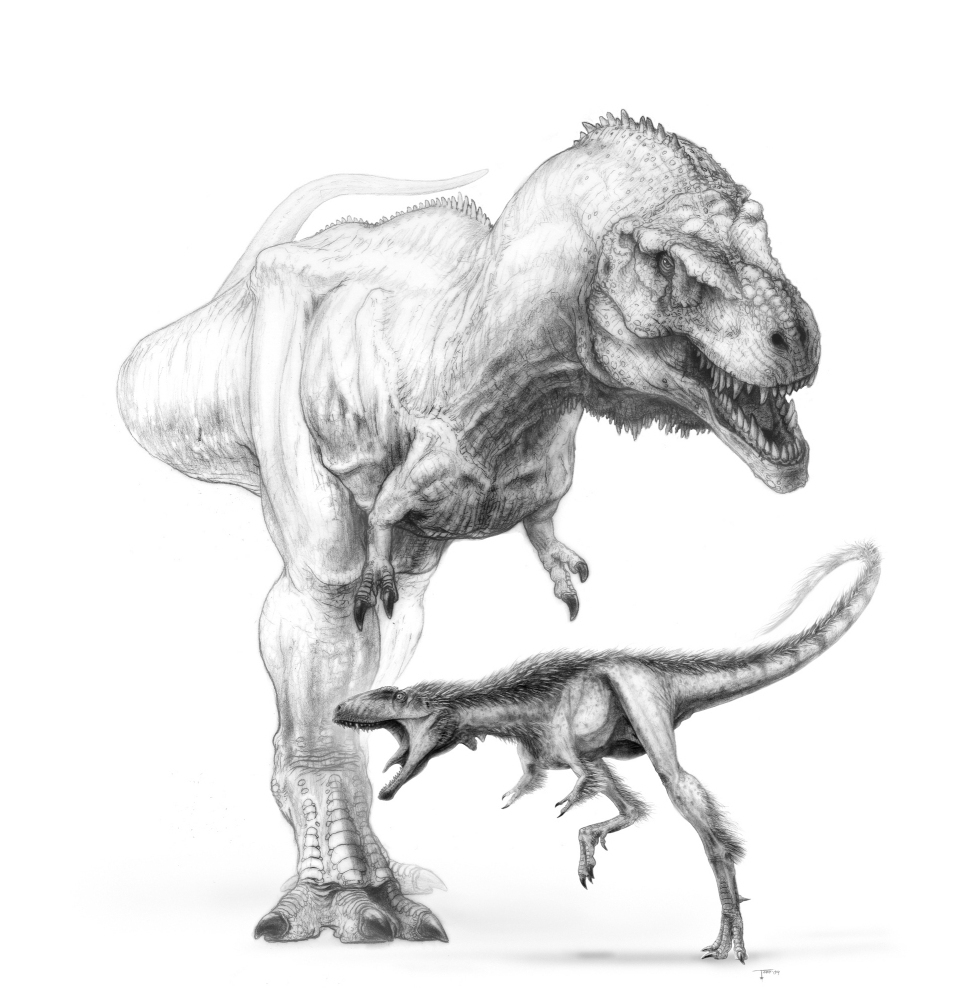 A pint-sized version of T. rex roamed the lands of what is now northeastern China about 125 million years ago. That's tiny by T. rex standards, though: Raptorex, a fierce predator like its eventual descendant, T. rex, very likely stood 9 feet tall.

"You know, we've really doubled the tyrannosaur diversity in the last 10 years," says Norell, who is among the world's leading fossil hunters. "And [we've] found ones that aren't just giant ones like Tyrannosaurus rex but smaller ones like raptorex, feathered ones like dilong. So it's really been this really big sort of renaissance, and tyrannosaurs are probably studied more than any other dinosaur that's ever been found."

The reason, he says, is partly due to their celebrity. "I mean, if you ask anyone in the street if they know one dinosaur, they know Tyrannosaurus rex."

Norell says the public's fascination with tyrannosaurs also infects scientists. Biologists who study the biomechanics of elephants or chemists who study proteins in bone have turned their attention to T. rex fossils. They've refined its posture. They've determined the length of its adolescence -- 10 to 15 years -- and its rate of growth -- as much as 5 pounds a day. They also may have found remains of T. rex tissue, though that's still in question.

"What I find really interesting is what you can do with sort of an eclectic and diverse group of scientists all focused on one animal," says Norell.

The discovery of the first T. rex skull in 1905 was a sensation for scientists. The creature soon took the film world by storm as well, becoming the bete noire of celluloid monsters.

Film didn't catch up to science until the Jurassic Park series, one that Holtz, the University of Maryland professor, says incorporated a lot of the latest dino-science, such as when a T. rex pursues a jeep full of human prey.

"Jurassic Park really helped introduce the world to T. rex as we now understand it, with its more horizontal posture," says Holtz.

It held its tail straight out back for balance, and its toothy head out front, looming in the jeep's rearview mirror, which showed the helpful message that "Objects in mirror are closer than they appear."

That jeep outpaced the dinosaur, which also reflects recent research suggesting that T. rex ran only in the 10- to 20-mile-per-hour range.

"They are the inheritors of tens of millions of years of dinosaur evolution," Holtz says with clear admiration, "and have selected for really sophisticated behaviors."

Not sophisticated enough, though, to have avoided extinction. Thankfully.