Accessibility links
Was Cardinal John Henry Newman Gay? As part of his visit to Britain Sunday, Pope Benedict XVI will beatify John Henry Newman, bringing the 19th century British cardinal one step closer to sainthood. But some question whether the revered cardinal and prolific author was in a relationship with his friend Ambrose St. John. 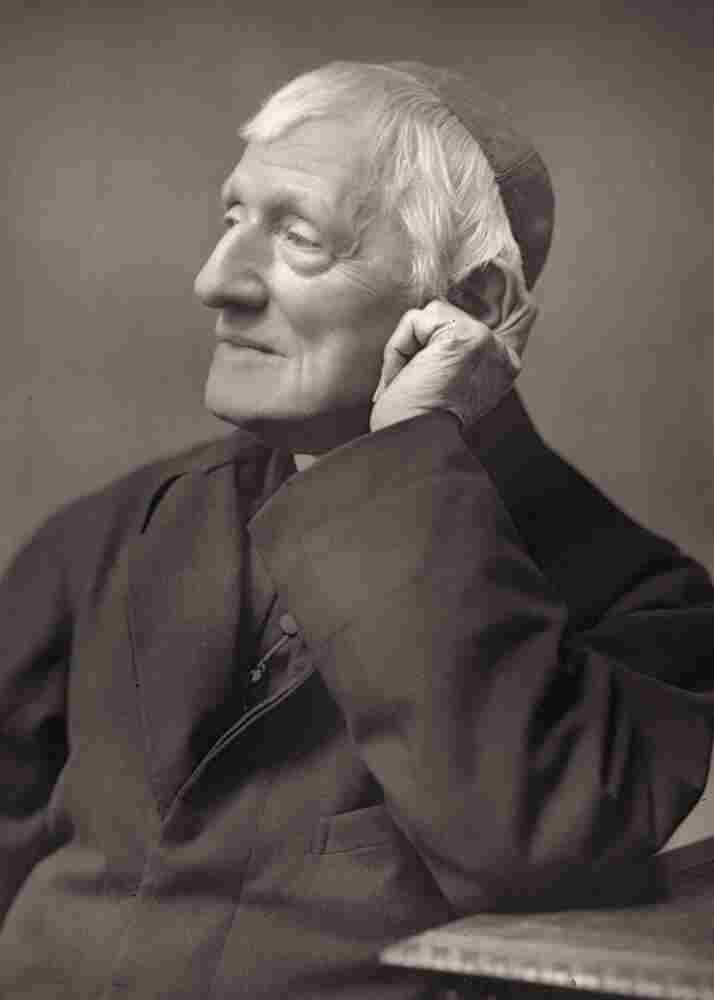 Cardinal John Henry Newman, who died in 1890, is one step closer to sainthood. But some people are questioning his relationship with his friend Ambrose St. John. Herbert Barraud/Henry Guttmann/Getty Images hide caption

Newman was a prolific writer and towering intellectual who converted from the Anglican Church to Catholicism -- but one part of his life is something of a mystery.

Born in 1801, Newman had many religious incarnations. His began his faith as an evangelical, then studied at Oxford and became an Anglican priest. Continuing at Oxford, he was drawn to beliefs and worship of the Catholic Church, and he led other like-minded Anglicans in the orthodox "Oxford Movement."

When he finally converted to Catholicism in 1845, his star rose quickly, as he became a priest and later a cardinal. Today, Newman is considered one of the great teachers of Christianity, having written some 60 works of philosophy and theology, novels, hymns and poetry.

"Many people feel his life is similar to the life of St. Augustine, and St. Thomas Aquinas and St. Bonaventure," says the Rev. Martin Moran, who oversees hundreds of Newman Houses -- centers for Catholic students on non-Catholic universities. "These were saints that maybe had a past, embraced the Catholic faith, and were also were great intellectuals."

Moran says Newman is a role model for young Catholics wrestling with their faith. He remained loyal to Rome but still questioned some church doctrines, including papal infallibility.

"He was on the edge, you know?" Moran says. "Many times he crossed the line a little bit."

Now some believe Newman may have come close to the line -- if not in actions, then in orientation.

"It's not unreasonable to think he might have been homosexual," says the Rev. James Martin, a Jesuit priest and author of My Life with the Saints. "His letters and his comments on the death of one of his close friends are quite provocative."

Even doing things like packing his bags before he went away, making sure he was taking his medicine, making sure he kept dental appointments, that sort of thing. So it was almost like a wife but without the marital bed.

John Cornwell, author of a forthcoming biography of Newman

That friend was Ambrose St. John, a fellow convert and Catholic priest. Newman described St. John as "my earthly light." The two men were inseparable; they lived together for 32 years. According to John Cornwell, author of a forthcoming biography called Newman's Unquiet Grave, St. John helped Newman with his scholarship, translations and more.

"Even doing things like packing his bags before he went away, making sure he was taking his medicine, making sure he kept dental appointments, that sort of thing," Cornwell says. "So it was almost like a wife, but without the marital bed."

When St. John died in 1875, Newman was devastated. "I have always thought no bereavement was equal to that of a husband's or a wife's," he wrote, "but I feel it difficult to believe that anyone's sorrow can be greater than mine."

Just before his own death, Newman made a strongly worded request -- not once but three times -- that he be buried in the same grave with his lifelong friend.

But Cornwell says if the two men had feelings, they didn't act on them.

"Having read all of those letters, all 32 volumes of them, I can't find any clear evidence of a sexual physical relationship," he says.

His Body Exhumed: Why?

Questions about Newman's sexuality became widely publicized two years ago. When it was clear Newman was on the path to sainthood, the Catholic Church ordered the cardinal's body to be exhumed and moved to a grander resting place in Birmingham Oratory church. Cornwell says the church sometimes relocates bodies so they're more accessible.

But Martin, like many others, wonders if there's another motive.

"Certainly the idea of pilgrims coming to the grave and seeing John Henry Newman on the tombstone and above him, Ambrose St. John, was certain to raise eyebrows," he says.

That is especially true now, when the Vatican has ordered that gay men cannot enter the priesthood. Martin has no doubt that there are plenty of gay saints, which is acceptable under church doctrine.

But in Newman's case, there are too many questions that are unlikely to be answered to make any public pronouncements.