Accessibility links
Excess Coal Dust Found In Massey Mine Evidence of the dust surfaced during an investigation into the West Virginia coal mine's explosion in April. Regulations require the removal or neutralization of built-up coal dust because of its explosive nature. Investigators say 79 percent of samples from the mine were not in compliance with federal standards. 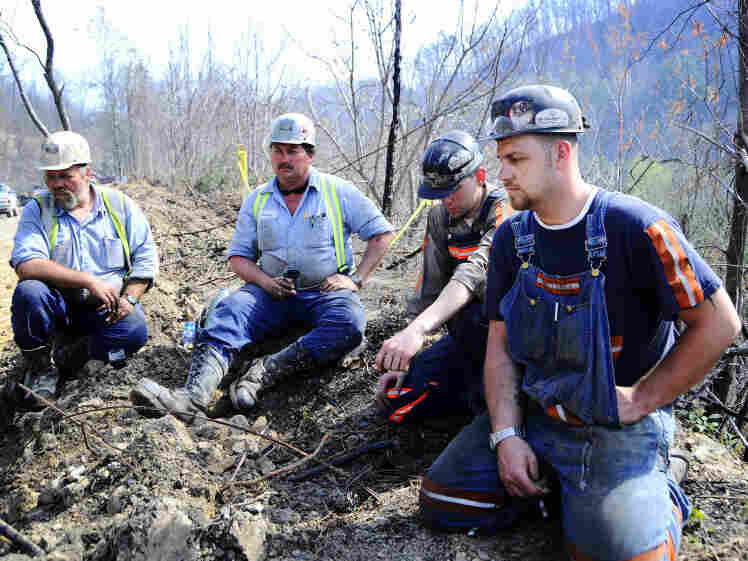 Massey Energy workers take a break from drilling efforts above Massey Energy's Upper Big Branch Coal Mine in Montcoal, W.Va., on April 7. Two days before, an explosion in the mine killed 29 workers. A recent investigation shows evidence of excess coal dust, a possible facilitator of the blast. Jeff Gentner-Pool/Getty hide caption

The search for a cause of April's deadly coal mine explosion in West Virginia has turned up evidence of excessive coal dust in the Upper Big Branch mine.

Coal dust is highly explosive and both accelerates and spreads smaller ignitions underground. Federal mine safety rules require removal of accumulated coal dust and the use of crushed limestone or "rock dust" to neutralize the combustibility of fine particles of coal that naturally cling to mine equipment, floors, pillars and roofs.

But analysis of 1,803 dust samples collected by investigators after the blast show that 79 percent are not in compliance with federal coal dust standards, according to Kevin Stricklin, who directs the coal mine division of the federal Mine Safety and Health Administration.

The finding, Stricklin says, suggests coal dust has "more potential to be involved in the explosion." Stricklin and other federal officials briefed reporters Friday on the status of the Upper Big Branch investigation.

The sample results follow reports earlier this week that excessive coal dust was seen in areas of the mine hit by the explosion a half-hour before the blast.

Ventilation problems, fire and coal dust hazards and electrical problems each made up about a quarter of the violations federal regulators found in underground coal mines last year.

Handwritten logs kept by two "fire bosses," mineworkers who check for dangerous conditions before and after work shifts, noted excessive coal dust along conveyor belts as little as 30 minutes before the explosion. The logs were first obtained and reported by The Associated Press.

But Stricklin says it's too early to draw conclusions about the role coal dust played in the explosion.

"Coal dust played a role," Stricklin says. "But we don't know how big of a role."

Excessive coal dust is considered important in the investigation because the explosion traveled more than two miles, turning corners and spreading in opposite directions. That suggests the blast was fed, directed and accentuated by an accelerant.

But Upper Big Branch owner Massey Energy is skeptical, accusing the mine safety agency of attempting "to use faulty and unproven coal dust claims" in its investigation.

In a statement, Massey says similar claims were made after another mine explosion and were discredited by an administrative law judge in a court decision.

Massey also suggests coal dust was not a problem the day of the explosion.

In the AP story about the handwritten logs, Massey Vice President and General Counsel Shane Harvey said, "[The mine] appears to have been very well rock dusted, with rock dust still in place."

Stricklin was asked at Friday's briefing whether the explosion itself would have compromised the dust samples.

The agency's expert, Stricklin responded, "thinks the … samples after an explosion are more probable to be better [closer to compliance standards] than before the explosion."

In its statement, Massey also sought to discredit the government's coal dust expert, saying he and his dust collection techniques were dismissed in the administrative court ruling in the earlier mine explosion case.

The tit-for-tat between Massey and the mine safety agency has been common in the disaster investigation. Massey continues to insist that the explosion was likely caused by a sudden and massive infusion of methane gas through cracks in the mine floor.

Stricklin added that the joint state and federal investigation of the disaster is about 90 percent complete. Crews are making progress in pumping water from flooded areas of the mine that were also hit by the blast. Two hundred thirty-five witnesses have been interviewed, and investigators have 20 more people they'd like to question. But some are Massey managers who have objected to subpoenas issued by the West Virginia Office of Miners' Health, Safety and Training. Federal investigators do not have the power to compel testimony except in public hearings.

Massey did not respond to NPR's request for comment about its managers' resisting subpoenas. And Ron Wooten, the director of the West Virginia mine safety agency, said through a spokeswoman he had no comment.

Twenty-nine mineworkers died in the blast, the nation's worst mine accident in 40 years. Relatives of the victims were briefed privately Thursday night about the progress of the investigation.

A federal criminal investigation is also under way and a federal grand jury in Charleston, W.Va., has also been issuing subpoenas and taking testimony.