Accessibility links
Hamiet Bluiett: Redefining The Baritone Sax For more than four decades, the spirited performer has combined the avant-garde with traditional jazz. Along the way, he's co-founded the World Saxophone Quartet and pushed for a more accessible kind of improvisation. Now, he's celebrating a milestone. 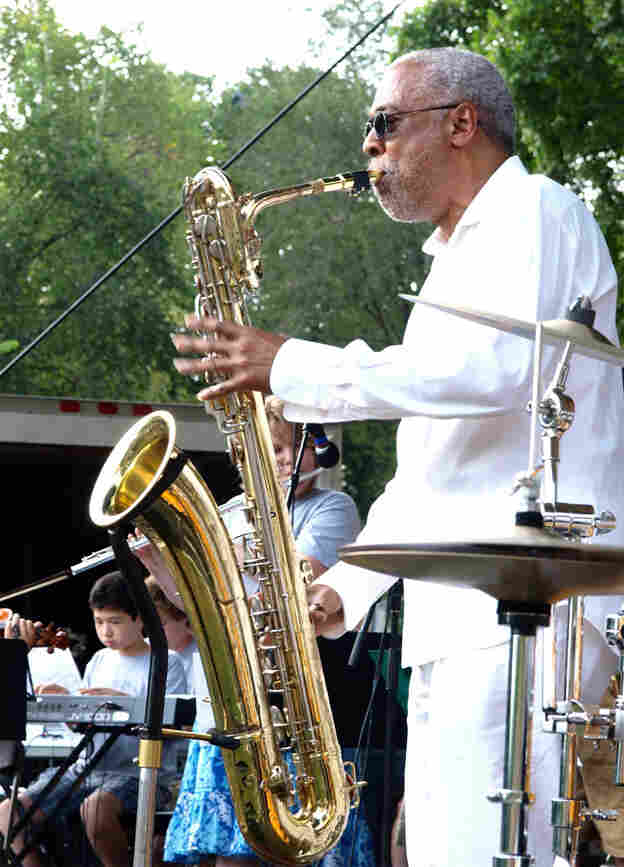 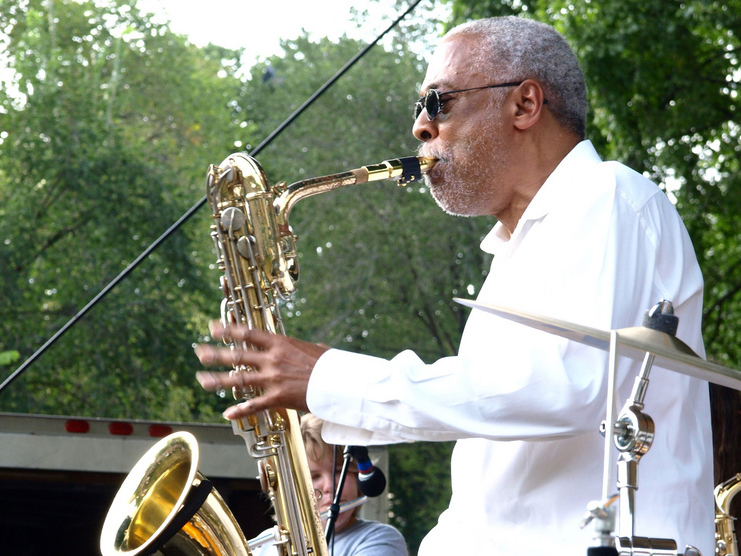 In 1976, when the World Saxophone Quartet played its first concert, it introduced a new sound to jazz.

No bass. No drums. No piano. Just four saxophones: the late Julius Hemphill playing alto, with Oliver Lake on alto and soprano, David Murray on tenor, and Hamiet Bluiett on clarinet and baritone sax.

Free jazz was flourishing in downtown lofts throughout Manhattan, but Bluiett says he argued for accessibility.

"I think melody is very important," he says. "We should play more music for women, play stuff that children like, old people, the whole works -- what's wrong with all that? So I was one of the guys, when we went into the loft situation, I told the guys, 'Man, we need to play some ballads. You all playing outside, you running people away. I don't want to run people away.' "

Bluiett says that in the beginning, all of the musicians in the World Saxophone Quartet were improvising at the same time, with no one playing a unifying melody or rhythm.

Hamiet Bluiett recently celebrated his 70th birthday. For more than four decades, Bluiett has combined the avant-garde with traditional jazz. Along the way, he's redefined the role of the baritone saxopohone -- rarely a leading role in jazz -- and co-founded the WSQ, one of the most successful bands on the fringe of modern jazz.

Bluiett was born Sept. 16, 1940, in Lovejoy, Ill., across the Mississippi River from St. Louis. He studied piano, trumpet and clarinet as a child.

At the University of Southern Illinois, he picked up the baritone sax. His notion of what the instrument could do was changed forever when he heard Harry Carney of Duke Ellington's band.

"I was sitting not too far from Harry," Bluiett says. "He was on one side of the band. Duke Ellington was on the other side. And this man's sound was bigger than Duke's whole band -- including the drums.

"The sound was big, beautiful, pretty -- it was so awesome. That went deep down inside of me. I never forgot it and I never will."

Get Up And Dance

Today, Bluiett is widely regarded as the most prominent baritone saxophonist of his generation.

Trombonist Craig Harris has played in a variety of bands with Bluiett over the past three decades. Harris will perform with his friend this weekend at a 70th-birthday concert in Washington, D.C.

"You can know Bluiett right away," he says. "You know, the texture and the density of his sound. It can't be nobody else.

"Bluiett has an incredible range, but it's not about range," Harris adds. "'Cause you have people who play high and low. But he has incredible feel to his playing. He pushes the thought of the instrument. 'Cause he's much bigger than the instrument."

Bluiett's spirit comes across: He's been struggling with cancer since 2002. He says he just wants to "be here," and to keep playing music for people.

"We were playing in the Brooklyn Botanical Garden," Bluiett says. "This guy came, he was in a wheelchair. So he was in the wheelchair section right near the band.

"And he was sitting there, you know, he was kind of like crying," he adds. "He grabbed me and pulled me down. He said, 'Man, I've been in this chair for so long, I got to the point, you know, where I relegated myself to be into the chair. And I was satisfied. You made me want to go back up and dance.' That was the biggest compliment I ever had in my life."

Hamiet Bluiett says he never planned his career. It all happened because he was open enough to let it keep happening.