Accessibility links
Are Genetically Engineered Fish Safe To Eat? The FDA is evaluating whether to approve the first ever genetically engineered animal to be eaten as a food -- a fast-growing, farm-raised salmon. But some say there are food safety and environmental concerns that need to be addressed.

An AquAdvantage salmon behind a non-transgenic Atlantic salmon sibling of the same age. Courtesy of AquaBounty Technologies hide caption 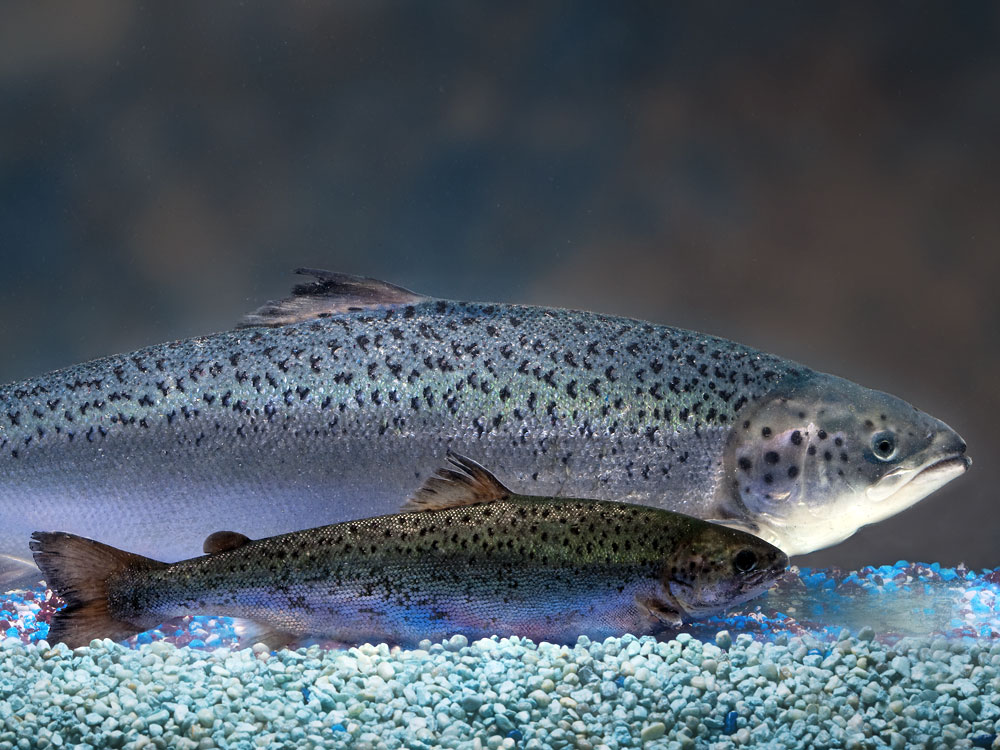 An AquAdvantage salmon behind a non-transgenic Atlantic salmon sibling of the same age.

A battle is expected to be brewing in a hotel ballroom in suburban Washington, D.C., on Monday, over whether the Food and Drug Administration should approve the first genetically engineered animal for human consumption -- a fast-growing Atlantic salmon.

The salmon is being developed by a small biotech company from Massachusetts, AquaBounty Technologies, and contains an extra growth gene that makes it grow twice as fast as conventional farm-raised salmon.

“This is a produce that we’re very proud of, we think has a very important role in the future supply of a safe and sustainable seafood product to the citizens of our country,” said Ron Stotish, president and CEO of AquaBounty, in a news conference with reporters last week.

The FDA seems to agree. In briefing documents posted before Monday’s meeting, the FDA says the studies conducted by AquaBounty show that the gene is safe for the salmon, safe for humans and safe for the environment

But some scientists and consumer groups say the agency should slow down and get more information.

A panel of scientific advisers to the agency is expected to make a formal recommendation Monday. The agency generally follows the advice of its advisers but doesn’t always do so.

The FDA says it cannot determine whether a food is absolutely safe, but it can compare it to a food on the market that is already known to be safe and produces no additional risks, like toxins or allergies.

In the case of the AquaBounty salmon, the agency’s documents indicate that the company has proven that the genetically engineered salmon have the same nutrients, fatty acids and minerals as conventionally grown salmon and don’t pose harm.

Stotish says the review process has been rigorous.

Hansen says the sample size used in the testing was far too small to determine whether consumers could be allergic, and the issue is a potentially serious one because some people are highly allergic to fish. It's one of the top five foods people are most allergic to.

Another contentious issue being debated Monday is what will happen if these salmon escape from fish farms into the wild. People are concerned about whether they would mate with wild fish, out-compete them for food or irreversibly change their habitats.

AquaBounty says not to worry.

"There is virtually no possibility of escape and interaction with wild populations,” Stotish says. 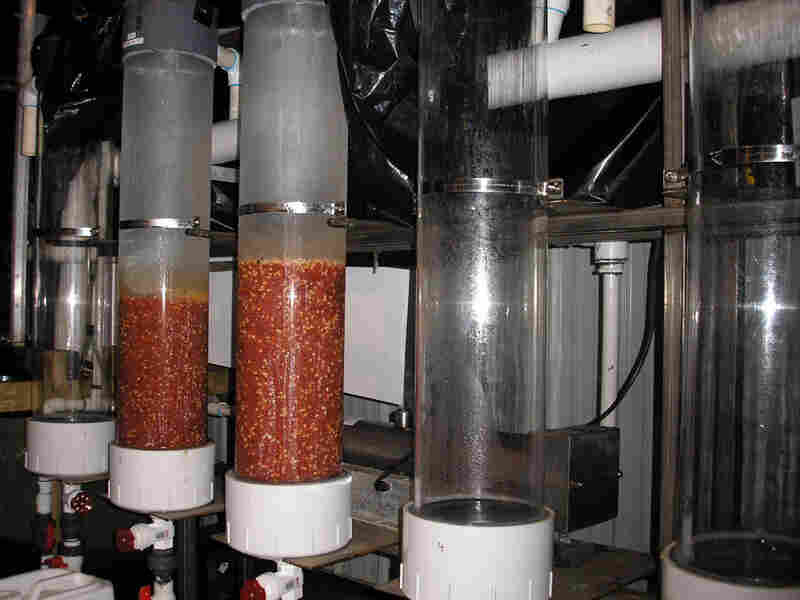 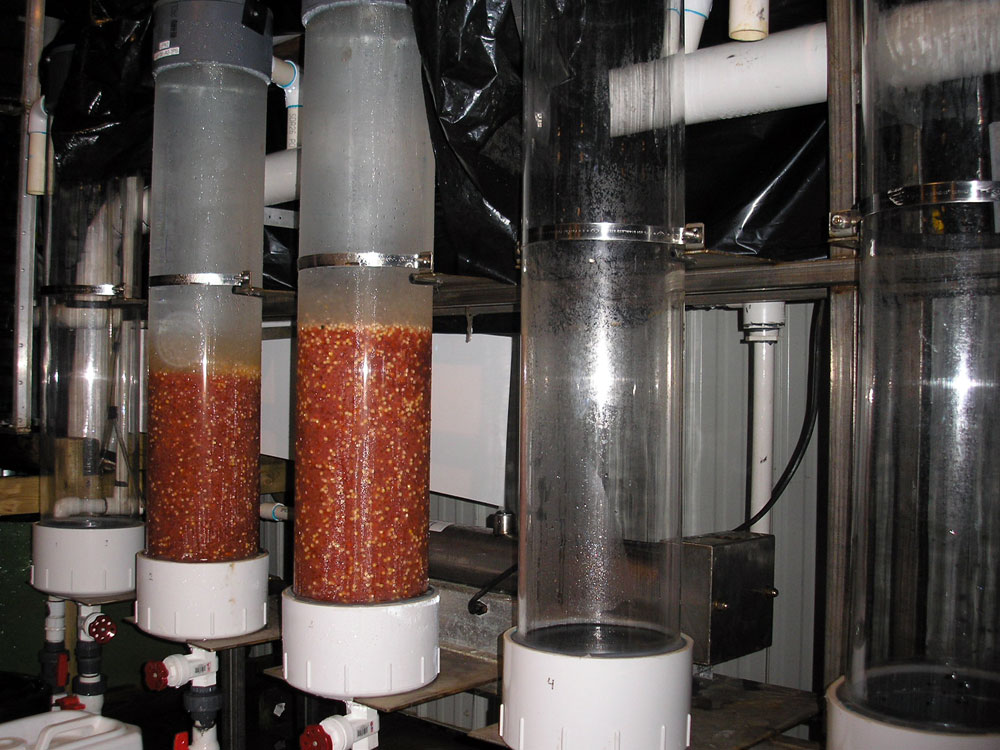 AquAdvantage salmon eggs are grown in incubator jars in a laboratory.

That’s because the fish eggs will be sterile, and they will all be female. Plus, they'll be grown in tanks on land, rather than nets or pens floating in the ocean, the way most conventional farmed fish is raised.

Margaret Mellon, a senior scientist and director of the food and environment program at the Union for Concerned Scientists, doesn’t think the FDA should settle for that answer.

“It’s a mistake we know well. The deep-water well at issue in the BP incident also contained simultaneous, multiple, redundant measures to keep a spill from happening. But despite all that, a spill happened,” she says.

Professor Yonathan Zohar of the University of Maryland, Baltimore County, supports the approval of genetically engineered salmon but thinks the agency should require more information on what would happen if the fish got out.

Zohar, chairman of the department of marine biotechnology, has been studying fish farming technology for 30 years and runs a land-based acquaculture project in the Inner Harbor of Baltimore.

“I'm not 100 percent satisfied with the environmental risk assessment," he says.

Zohar is speaking at the meeting Monday on the state of biotechnology and aquaculture at the request of the agency.

Zohar says people should not be afraid of biotechnology and should get used to eating more farmed salmon. He’s been looking for ways to make it more environmentally friendly and to help captive salmon breed better. He says wild fish stocks just can’t keep up with demand for food.

“People eat chicken. It’s all farmed. People don’t think twice about it. A switch of the mindset has to happen for the consumer for seafood, for fish,” he says.

Jeff Black, the chef and owner of BlackSalt seafood market and restaurant in Washington, D.C., is not so sure its that simple.

He prides himself on knowing his fish purveyors well, and where their products come from and how they’re raised. He sells both farmed and wild fish, but he’s not a big fan of farmed fish. He says many fish farms dump their waste into the ocean.

“I would love it if we didn’t sell any [farmed salmon] but the reality is that salmon is the No. 1 selling fish,” he says. He couldn’t keep up with demand otherwise, he says.

Black is concerned that he doesn’t have enough information about genetically engineered salmon and that the FDA seems to be rushing forward.

He’s also worried that consumers won’t have a choice.

"It should absolutely be labeled, and the public should be allowed to make their own decision. In the restaurant industry, we have what's called truth in menu. And truth in menu requires me to tell the truth about the things I'm serving,” he says. AquaBounty should be held to the same standard, he says.

In the documents it released before the meetings, the FDA says because the flesh of the genetically engineered salmon is essentially the same as traditionally raised salmon, a new label is not required. However, the agency is planning a hearing Tuesday to hear from the public regarding the labeling.

Mellon of the Union of Concerned Scientists says the FDA needs to reconsider the labeling issue.

“It is against the law to withhold from the public information that’s material, and I think information about whether animal foods are genetically engineered is highly material,” she says.

AquaBounty is hopeful that its application for genetically engineered salmon will ultimately be approved. CEO Stotish says he’s disappointed but not surprised by the criticism.

“The rest of the world looks to the United States for leadership in the science-based regulatory process, and the application and the method of review that the agency has used, we believe, will be an example to nations around the world,” he says.