Accessibility links
Pa. University Bans Facebook, Twitter For A Week Harrisburg University of Science and Technology spent a week blocking Facebook, MySpace, Twitter and instant messaging on its campus computer system. As a center for the technologically inclined, the campus provoked frustration and discussion around the topic of social media. 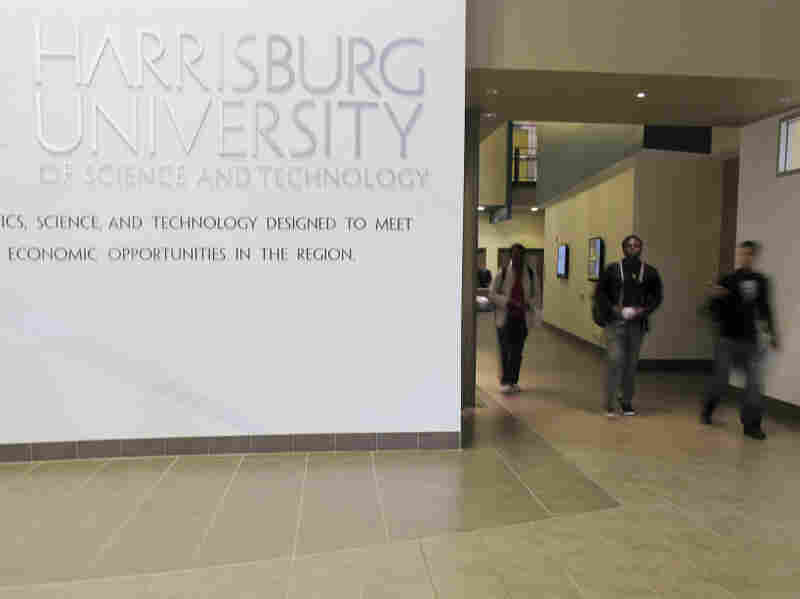 People walk through the atrium of Harrisburg University of Science and Technology in Harrisburg, Pa., on Thursday. Students and staff at the university are experimenting with shutting off Facebook, Twitter and a host of other social networks while on campus. Marc Levy/AP hide caption

A Pennsylvania university is testing whether students and faculty can go a week without social media by temporarily blocking Facebook, MySpace, Twitter and instant messaging.

Oluyemi Afuape, a senior at the school -- Harrisburg University of Science and Technology -- says he's not a social media addict, but he likes to update his Facebook status in between classes.

"Normally, at the end of class I'll put up a status like, 'Oh the class was hard, I didn't get this topic.' Or let's say after class I'll say, 'I'm about to go to Subway,' and my friends will see the status and join me for lunch or dinners," Afuape says.

But meeting up with friends is coming at a higher cost for him under the ban.

"I know my phone bill is going to go up because I spent a lot of time texting people rather than getting on Facebook," Afuape says.

The temporary ban was the idea of Provost Eric Darr, who says the goal was simply to "focus attention on social media, knowing full well that students and faculty could access social media through smart phones and other means."

Darr says he can't stop people from plugging in. All he can do, he says, is put in a hurdle and see what happens.

The experiment is part of a weeklong focus on social media. The campus also held a summit for business leaders and educators.

Sherrie Madia, one of the panelists and author of The Social Media Survival Guide, says the blackout is an opportunity to reflect.

The E-Textbook Experiment Turns A Page

"Why are we posting on Facebook, why are we sharing, why are we disclosing in this way and for what purpose? Many people are already in the habit of, 'I have to go post to Facebook, I have to go see what's happening, I have to update my status.' Why? You don't have to," Madia says.

But for students who feel like they do, it seems this is the place where they'll find a way.

Remember, he says, this is a university of science and technology.

"I know of at least 10 people who have bypassed it, and you can say hacked into Facebook," Clarke says.

Jason Hyers, a senior majoring in computer information systems with a concentration in system security, has been learning how to protect Internet sites from hackers. By now, he likely also knows how to hack a system.

"Monday morning it was actually my job to try [to find] some holes through the system," Hyers says. "It was nice to put my skills to use. Just realizing, 'Hey, I am learning stuff and my knowledge here is actually practical.'"

And though some might have pushed their boundaries, students and faculty say they are glad instant-messaging, tweeting and using Facebook will be easy again on Monday.