Accessibility links
Mystery On The Nile: Just Whose River Is It? After much toil and hardship, 19th century explorers solved the mystery of where the Nile begins. But who has rights to the water remains a hot debate among countries in the mighty river's basin.

All great mysteries begin at the end and end at the very beginning. And for thousands of years, the Nile River was perhaps the world’s greatest mystery.

Anyone can see where it ends, pouring northward through Egypt and into the Mediterranean Sea. But locating the origins of this magnificent river befuddled nearly everybody. Not until the Victorian Age did Western explorers find what had eluded so many.

The 19th century explorers who helped solve the mystery of the Nile's source were the best of the Victorian era, doing the work of Britain's Royal Geographic Society, of private sponsors, sultans, Egyptians and of a queen bent on expanding her empire.

But in settling the question of the Nile, the explorers may have inadvertently stumbled onto a whole new question: Just whose river is it?

That's still being debated and disputed among the countries of the Nile River Basin. But no one disputes the herculean efforts of the men and women who solved the puzzle.

But as is often the case in stories of heroism and hijinks, many of these people did great things, but not all of them were great people. Burton, for instance, reportedly loathed black people, an unfortunate prejudice given that the headwaters of the Nile are deep in the African interior.

Black Africans made up most of the expeditions that brought the explorers glory and fame. The Africans carried the water, the tools, the boats and sometimes even the explorers themselves. Many died along the way.

The explorers also managed to bribe and cajole warring African kingdoms to share information about where the headwaters of the mysterious Nile might be. Even Arab slave catchers contributed to the effort with valuable information and, in the case of Livingstone, life-saving supplies.

The work of the explorers was grueling -- and scary. In the mid-19th century, the Nile Basin was an unknown thicket to Westerners. Nearly every rocky, soggy, itchy step was on hostile ground. Creepy crawly insects, tsetse flies, bed bugs, mosquitoes and black ants the size of Chiclets were just as awful as the crocodiles along the shore and the pythons hanging from the trees.

But archaeologist Matthew Davies of the British Institute of East Africa says that the explorers had to press on. 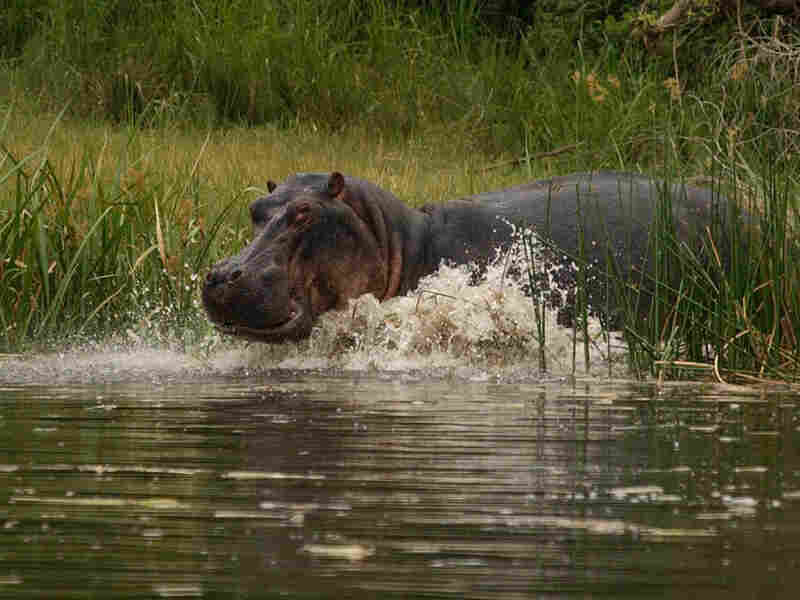 A hippopotamus wades into the waters of the Nile in Uganda. Miguel Juarez for NPR hide caption

Edith Matega teaches high school history in Kampala, Uganda, near the headwaters of the White Nile. She says the Victorians were looking for something that wasn’t lost. Speke was the first white man to see Lake Victoria, a major source of the river. But Matega says he wasn’t the first person to see the lake.

“We don’t say, 'discovered,'” Matega says. “Because we know the Africans had already seen it before him.”

Before the mid-19th century, Davies says, the job of following the Nile from beginning to end was too difficult for anyone -- European or African -- to tackle. The great missionary-explorer, Livingstone, died on his knees praying to understand the Nile’s flow.

But Samuel and Florence Baker found a major piece of the puzzle. They approached from Sudan, walking where they couldn’t sail, sailing where they couldn’t walk and moving forward where there was no going back. In 1864, they found not only where the Nile exits its major source at Lake Victoria, but also how it courses later through Lake Albert before heading north to Sudan and on to Egypt.

As the British say, the Bakers had “settled” the Nile. But nearly 150 years later, the Nile remains unsettled to many nations that depend on the river.

Two colonial-era agreements give Egypt and Sudan -- the downriver countries – the majority claim on the Nile’s waters. But other countries in the Nile Basin -- including Uganda, Tanzania, Kenya, Rwanda and Ethiopia -- now want to more equitably share the river.

Yet Egypt and Sudan say they won’t give up a single drop.

John Bosco Suuza, a lawyer for the Ugandan government, says, "Actually when you talk to Egyptians they jokingly -- although I'm sure seriously -- say, 'No, no, no, that's not your water. It's our water, stored in your country.'"

Next week: Ethiopia asserts its rights to waters from the Nile