Accessibility links
Palin To Iowa Republicans: It's Time To Unite The former Alaska governor was coy about her future political plans and tried to focus attention on the upcoming midterm elections at Friday's annual Ronald Reagan Dinner in Iowa. She called on Republicans to get behind the candidates who won their primaries. 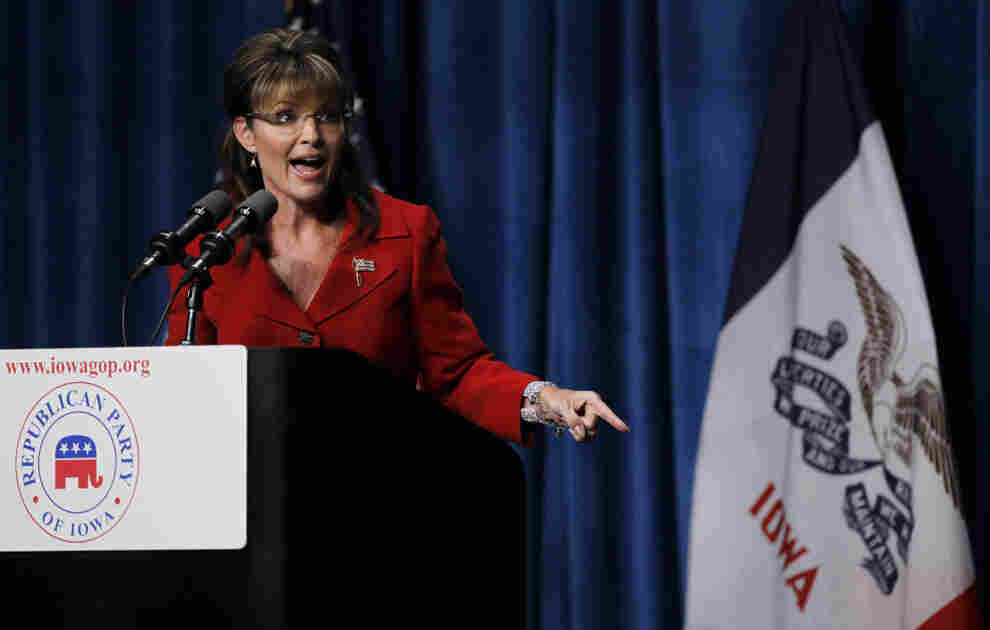 Former Alaska Gov. Sarah Palin was coy about her future political plans, but she did have a message for fellow Republicans at Friday's annual Ronald Reagan Dinner in Iowa: It's time to unite.

About 14,000 Iowa Republicans -- the biggest crowd the party's annual dinner has ever drawn -- streamed into Hy-Veel Hall in downtown Des Moines to see the GOP's biggest star, who tried to focus attention on the upcoming midterm elections.

Wearing her trademark red, Palin told a joke about wanting to go jogging in the warm Iowa sun earlier in the afternoon. She said her husband, Todd, told her she should use the hotel treadmill instead.

"Why would I want to stay indoors?" she said. "Todd says, 'Cause I guarantee you, if anybody spots you in the tennis shoes, the headline’s gonna be, Vanity Fair: Palin, in Iowa, Decides To Run.'"

Palin clearly had a recent unflattering profile of her in Vanity Fair on her mind as she spent a good portion of her speech castigating what she called the "lame stream media" for relying on unnamed sources:

"First, remember that they are cowards, usually in some self-preservation mode striving for personal power," she said. "And the journalists perpetuating the problem, the untruths, they are gutless. They rode our faith in this once-proud bedrock of our democracy, America’s free press."

But Palin's main theme was a call for Republicans to get behind the candidates who won their primaries. Many of them, including last week's surprise winner of the Delaware Senate primary, Christine O'Donnell, were opposed by the Republican establishment and backed by Palin.

"If the goal really is to take away the gavel from Pelosi and Reid, and to stop the Obama agenda, and make government respect the will of the people and the wisdom of the people, then it is time to unite," she said.

Palin blasted the Obama administration, saying it believes the answer to every problem is another federal program. She chided the president for now supporting business tax cuts she said were part of the McCain-Palin platform in 2008, and said his foreign policy was foolish.

"It’s the voters who will stop these leftist policies. The voters will stop this fundamental transformation of America that is not good for America," she said. "It’s the patriots who will restore America."

"I wanted to stand up and say, 'You go girl!'" said Mary Kramer, a former state senator and U.S. ambassador. Kramer said she wouldn't mind seeing Palin run in two years. "I think she has the message and the courage to do what needs to be done."

Roger Ray, a retired police chief from Early, Iowa, liked the speech, but said he wasn't sure if he wanted to see Palin on the ballot in 2012:

"Actually I'd like to see Sarah doing what she's doing -- rally the troops," he said. "I dearly love Sarah but I just don't think she's got the electable qualities that they're still going to need to carry, but she'll be the voice of the party that will help get whosever in there."

Palin gave no hint of her plans beyond this fall. Asked after her speech when she planned on returning to Iowa, which holds the nation's first presidential caucus in 2012, she said soon. She quickly added, however, that she wants to get to Delaware very soon and start knocking on doors.