Accessibility links
Despite 'End' Of Combat, U.S. Assists In Iraqi Raid The raid on Wednesday killed seven people in a village outside Fallujah. The incident has raised questions about just how Iraqi and American forces conduct their operations -- especially since President Obama announced that combat operations in Iraq are over. 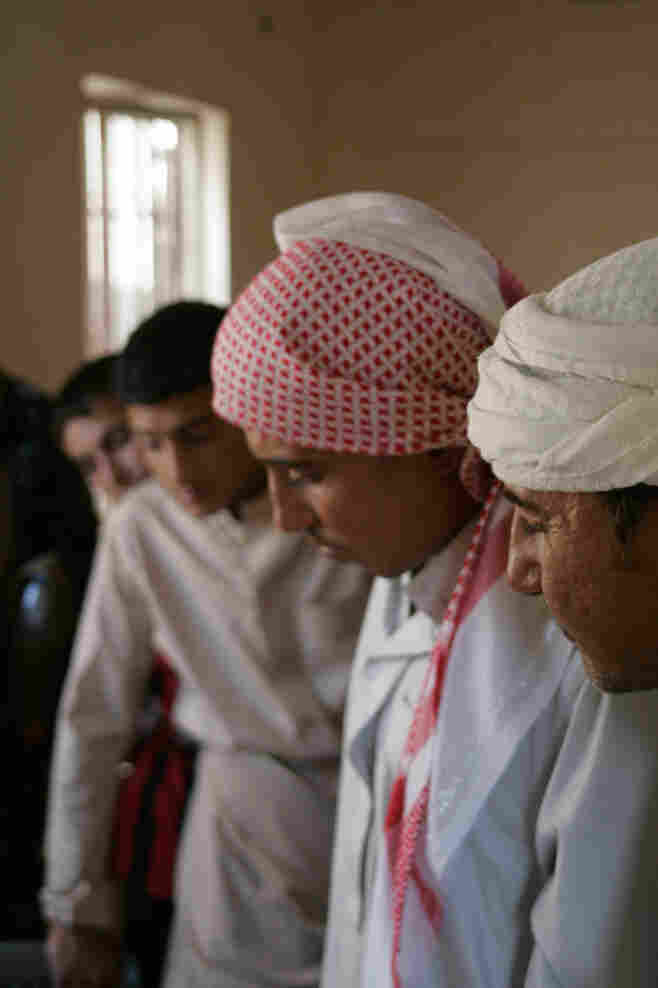 Mahmoud Hassan (foreground) and Hamid Humadi Jassim show reporters where their relatives were killed during a raid in the village of Jubail, outside Fallujah, Iraq. Ali Omar Al-Mashhadani for NPR hide caption

The village of Jubail, just outside the former insurgent stronghold of Fallujah, consists of mostly dirt streets and mud-brick houses. On a recent day the narrow streets were lined with shrouded women clutching each other by the arm, and men wearing formal robes over everyday dishdashas.

They're heading toward a funeral.

Earlier this week, American and Iraqi forces raided this village, killing seven people, including a young boy. The incident has stoked sectarian tensions and raised questions about just how Iraqi and American forces conduct their operations -- especially since President Obama announced that combat operations in Iraq are over.

A boy pours guests small cups of Arabic coffee inside the funeral tent. Then Mahmoud Hassan, 43, walks reporters toward a house and shows them where he was sleeping when the raid began.

"I was covered with a blanket, and they shot [at] me. They thought that I was dead," Hassan says. "Then immediately they got inside this room ... and started shooting. And I was there, watching them."

Hassan points to a smear of blood on the wall and an even thicker pool of blood on the floor. This is where he says his 70-year-old brother and three nephews were killed.

"There was one small kid, he was in the fifth [grade]," Hassan continues. "They shot his father in front of him. Then they shot him dead also."

Hassan says both Iraqi and American soldiers did the shooting.

Next door, neighbors say Yasin Chesar Saad, a former colonel in Saddam Hussein's army, and his two sons were killed. After the American invasion of Iraq in 2003 and the dissolving of Saddam's army, many such men joined the insurgency. 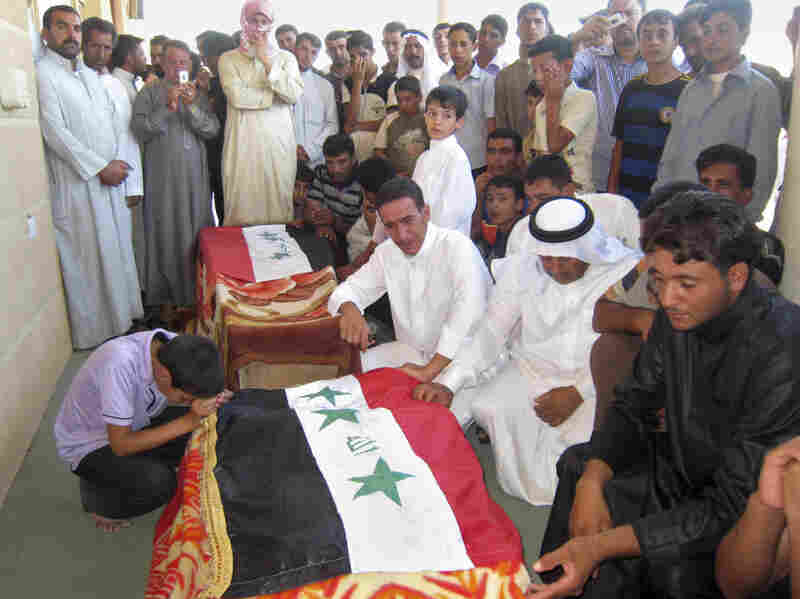 Relatives and friends mourn during a funeral Thursday. Seven people were killed in the Wednesday raid, including one young boy. Bilal Fawzi/Associated Press hide caption

Villagers say Saad was a good man who owned a shop in town. But others suggest he might have helped fund what they call the "real resistance" -- to kill Americans.

The American and Iraqi military statements said only that the raid targeted a known al-Qaida leader responsible for a number of attacks.

One of the brothers who survived the raid, Hamid Humadi Jassim, 24, says he's angry at the Americans and at the Iraqis whom they trained.

"If they knew who their target was, then why did they kill a young boy?" he says.

The Iraqi troops on the raid were members of an elite counterterrorism force that reports directly to Prime Minister Nouri al-Maliki.

Back outside in the funeral tent, men in black suits arrive to pay their condolences. They're from a Sunni-dominated political party.

"They did this to us," one politician says, emphasizing the tension between this Sunni stronghold and the Shiite-dominated government.

The next day, mosques in the region rang out with angry sermons. The day after that, thousands of people took to the streets to denounce the Americans and their Iraqi counterparts.

Maliki eventually sent a team of investigators and pledged that Iraqi soldiers who killed innocents would be punished and the families compensated.

Since combat operations in Iraq were declared over, U.S. troops have engaged in at least two other fierce firefights. One was earlier this month during a multiple suicide bombing attempt on a joint base in Baghdad. The second was last week, during a raid on insurgents in a palm grove in Diyala province that involved U.S. planes dropping two 500-pound bombs.

Army spokesman Brig. Gen. Jeffrey Buchanan says he understands why most people would call this combat.

"I think that we need to do a better job explaining it," he says. "Our rules of engagement have not changed. All of our service men and women retain the right to defend themselves. And also the commander on the ground can make the request for additional assistance."

That commander can be American or Iraqi, Buchanan says. Assistance can come from the ground or from the air.

For now, the U.S. military says it "doesn't know" whether U.S. forces fired shots during the Fallujah raid. It's very likely the troops there were special forces, who have broader rules of engagement than regular troops. But their operations are almost always kept secret.