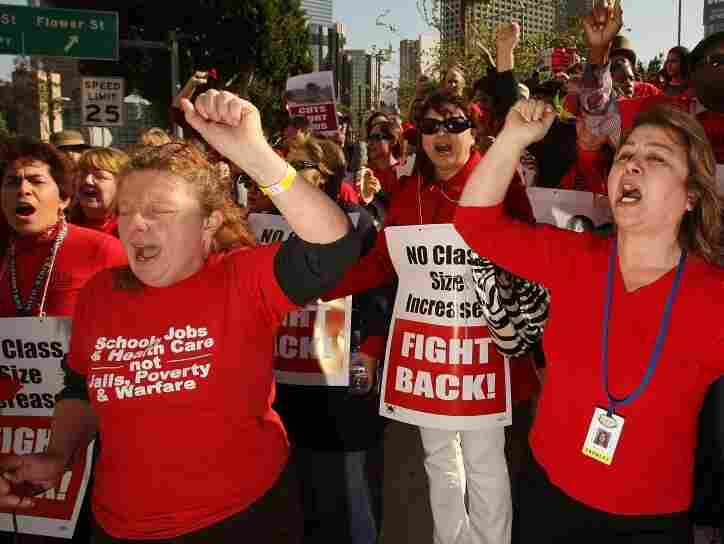 Members of the LA teachers union rally over proposed layoffs. Teachers unions have been the focus of many of the Democratic primaries this year, especially in the race for D.C. mayor. David McNew/Getty Images hide caption

Michael Barone is senior political analyst for the Washington Examiner.

My subject today is the civil war raging in one of our great political parties, as highlighted in recent primary elections.

No, I’m not talking about the split between tea partiers and the Republican establishment (is there a Republican establishment anymore?). I’m talking about the split between two of the core groups of the Democratic party, as witnessed in the September 14 primaries in heavily Democratic New York (63 percent for Barack Obama in 2008), Maryland (62 percent Obama), and the District of Columbia (92 percent Obama).

Fred Siegel, professor at Cooper Union and unexcelled analyst of contemporary New York politics, identifies two big winners there. One is Eric Schneiderman, a public-employee-union stalwart. He won the Democratic nomination for attorney general, an office whose previous holder, Eliot Spitzer, was elected governor in 2006, and whose current incumbent, Andrew Cuomo, seems certain to be elected governor this year. The other is the Working Families party, controlled by public-employee unions, which provides many Democrats, including Cuomo, an extra line on the ballot.

The big question is whether Cuomo, if elected, will keep his promises to hold down spending, or whether he will cave in to the unions. Siegel predicts his governorship “might well be pulled apart by these cross-tensions.”

Head down Interstate 95 to Maryland, and you see a similar picture. Longtime local analyst Blair Lee IV, whose father was acting governor in the 1970s and whose great-grandfather was elected U.S. senator in 1913, notes that candidates supported by public-employee unions whipped their opponents in Democratic primaries. In Montgomery County, the only county-council member defeated was targeted by the public-employee unions.

At the Washington Examiner, we have read with interest editorials written by our friends at the Washington Post denouncing the greed of the Montgomery County teachers’ unions. Unfortunately, their editorials (and ours) don’t seem to have cut much ice with the county’s gentry liberals, who either stayed home (turnout was a record low) or did the bidding of the unions.

But the starkest demonstration of the public-employee unions’ power came in the District of Columbia, where Mayor Adrian Fenty was defeated in the Democratic primary by council president Vincent Gray. There’s no Republican candidate, so Gray is as good as elected.

Four years ago, Fenty carried every precinct in the city. In office, he has drawn national attention for his appointment of Michelle Rhee as school superintendent. Rhee’s reforms have produced higher test scores, stable rather than declining enrollment, a teacher-evaluation system that has resulted in the dismissal of dozens of incompetents, and a union contract giving administrators greater flexibility in assignments.

Rhee won national acclaim, but she antagonized politicians like Gray with deep roots in Washington’s black community. Blacks here, as in most large cities, have been more likely than average to work in public-sector jobs — a legacy of the days half a century ago when governments, at least north of the Potomac, didn’t discriminate against blacks the way many private firms did.

As a result, Gray struck a chord with black voters when he denounced Rhee’s teacher layoffs — the same layoffs that gentry liberals hailed as eliminating bad teachers who hold back the progress of children from poor families.

This divide is apparent when you look at the election returns. Gray won citywide by a margin of 54 to 44 percent. Fenty won 72 percent in Ward 2 (Georgetown and West End) and 79 percent in Ward 3 (west of Rock Creek Park), both dominated by gentry liberals. Gray won 82 percent in Wards 7 and 8 (east of the Anacostia River), both heavily black.

Gentry liberals and public-employee unions were allies in the Obama campaign in 2008. But now they’re in a civil war in city and state politics. This raises the question of whether the Democratic Party favors public-employee unions that want more money and less accountability, or gentry liberals and others who care about the quality of public services. Right now, the unions are winning.