Accessibility links
Frame Jobs: 'Buried' And Other Boxed-In Stories Despite the big screen's ability to show vast worlds, some directors love to narrow the focus. Director Rodrigo Cortes expands on the tactic (made famous by Hitchcock and others) by setting an entire film within an underground coffin where a contractor in Iraq has been buried alive. 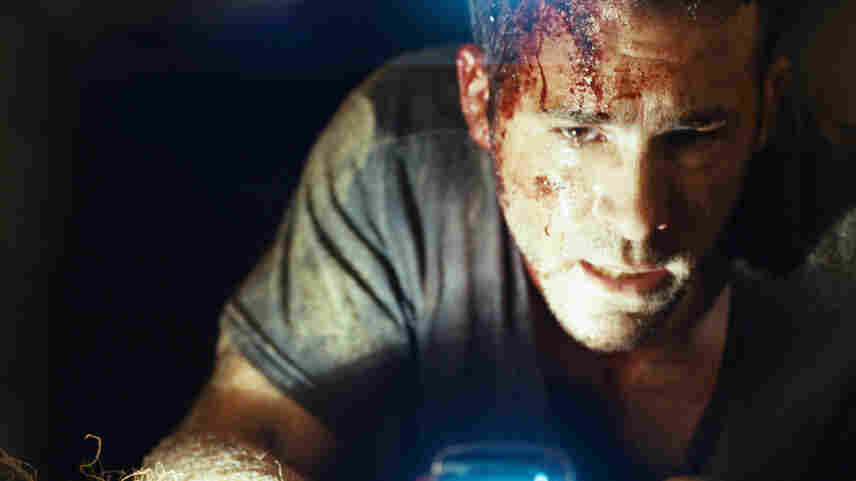 The new film Buried takes place on what may be the smallest movie set ever created: Actor Ryan Reynolds spends the entire film trapped inside a coffin. And something disconcerting happens when the big screen gets this small.

Film technology has advanced to the point where a movie can do more or less anything -- plunge us into Leonardo DiCaprio's dreams, take us mountain climbing with vampires, rocket us to a moon called Pandora -- so what possesses filmmakers to set entire films in tight, defiantly uncinematic spaces? Director Rodrigo Cortes is making a choice in Buried when he puts us, along with actor Ryan Reynolds, in a box that's 6 feet by 3 feet by 18 inches.

Reynolds isn't the only actor who has suffered this movie fate. Characters were buried alive in the 1988 thriller The Vanishing, in the Coen brothers' Blood Simple, in the gangster movie Casino. The most memorable instance was perhaps in Kill Bill 2, when Quentin Tarantino stuffed a battered Uma Thurman into a casket and nailed it shut.

But Thurman only spent a few minutes in that box. The movie also let her demolish half the Wild West and a good chunk of the "inscrutable" East. And all those other confined scenes were also just scenes; the pictures they were in also gave you broad vistas, streetscapes, and open air. 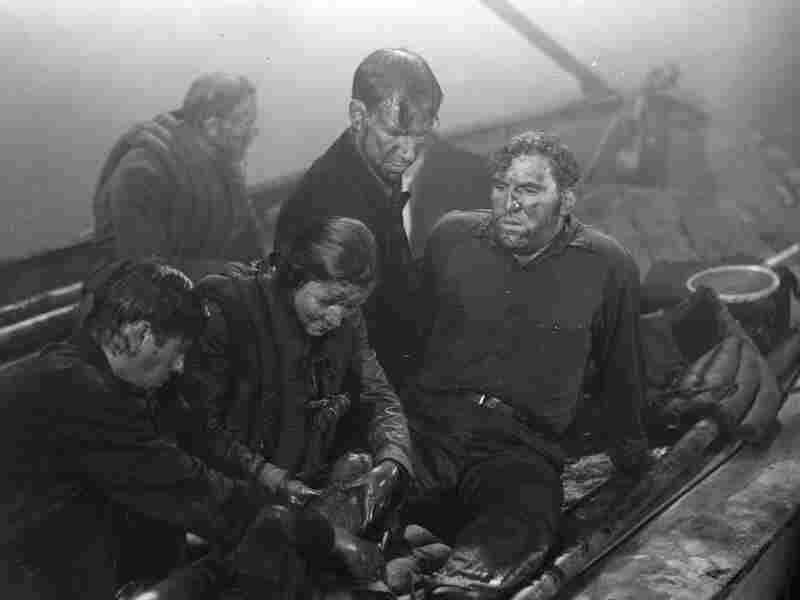 Alfred Hitchcock put his mark on what you might call the "tight-spaces movie" with Lifeboat, which stranded William Bendix, Mary Anderson and others in a tiny boat in the Atlantic. Hulton Archive/Getty Images hide caption

Buried belongs to a different subgenre: movies in which the director decides to ratchet up the tension by trapping the audience in a tight space along with the actors. Think Twelve Angry Men, where you're confined to a jury room, or Das Boot, the German submarine movie, where you're so deep underwater the gauges are exploding. Or Alfred Hitchcock's Lifeboat, which takes place entirely on a torpedoed liner’s lifeboat in the middle of the Atlantic.

Hitchcock particularly loved to narrow the camera's focus, and he did it over and over after Lifeboat: to a motel in Psycho, to an apartment in Rear Window. He knew that holding the audience hostage helped make a taut situation downright claustrophobic. As a character in Lifeboat put it, “We’re all sorta fellow travelers in a mighty small boat on a mighty big ocean."

Of course, there is that "mighty big ocean" to make the film feel expansive. The big screen's great gift, after all, is for being big. A stage play is stuck on a set; a painting has a frame. But films capture the imagination because with close-ups, they can be bigger than life -- or with a wide shot, as big as all outdoors.

Still, there are reasons to go the other way. Restrict your action to a single room and you lower your budget. Restrict it still further, and you start to play with cinematic form, especially in how it affects content. When the Israeli film Lebanon opened this summer, much of its fascination came from the fact that it was a war movie set almost entirely inside a tank. The audience saw things only as the tank crew did, through the cross hairs of a gun sight -- a nice metaphor for how armed conflict leads to tunnel vision.

Buried also takes place in a war zone, and also invites a kind of tunnel vision -- not philosophical this time, but cinematic. There's no question it's a gimmick, so restrictive that you figure the shoot must have been hell. Imagine the director looking for a fresh camera angle when he can only get inches away; the temptation to open things up must have been intense. And it would have been so easy to show the ringing phones the trapped guy is frantically calling on his cell, or cut away to people walking right past his shallow grave.

But as with Lebanon, Das Boot, and Twelve Angry Men -- films that put aside convention to think outside the Hollywood box -- there is never a shot outside the box. If your point is to keep things tight, you have to have the courage of your restrictions.