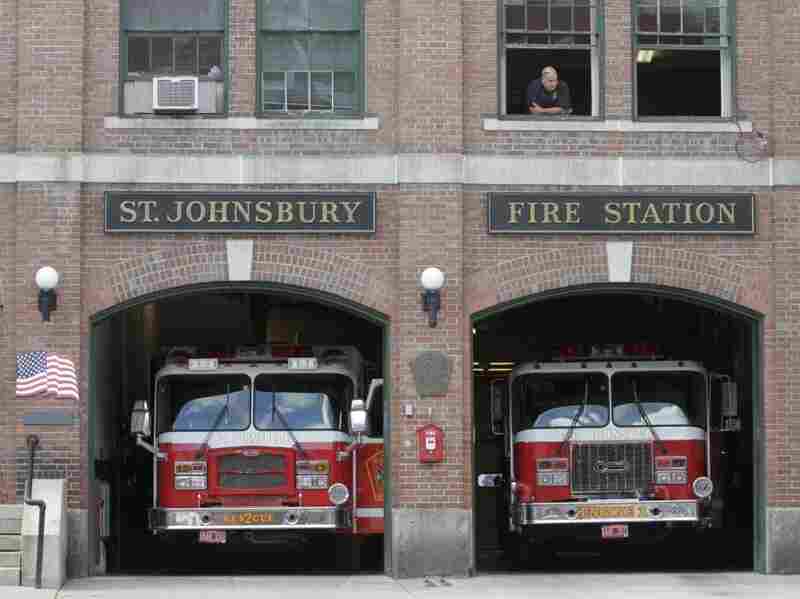 A firefighter looks out the window at the firehouse in St. Johnsbury, Vt., where a circulating petition has called for the closing of the fire department to save money. Local budget crises have led to cuts to fire departments across the country, including California. Toby Talbot/AP hide caption 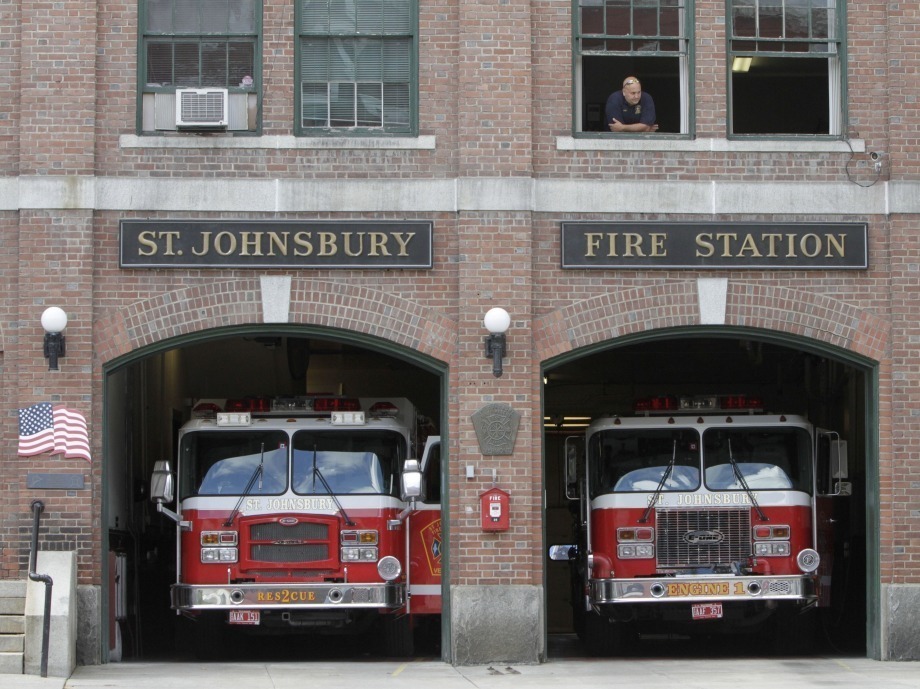 A firefighter looks out the window at the firehouse in St. Johnsbury, Vt., where a circulating petition has called for the closing of the fire department to save money. Local budget crises have led to cuts to fire departments across the country, including California.

Unlike libraries, parks and schools, police and fire departments have largely been protected from local budget crises in cities across the country -- until now.

In California, unprecedented cuts to fire station budgets are raising concerns about municipalities' ability to respond to emergencies, especially now that wildfire season has begun.

In the spick-and-span kitchen of Vallejo Fire Station 27, the sweet smell of flavored coffee hangs in the air. It's 8 a.m., and acting Capt. Thomas Brew sits down at the large table after two straight days on duty.

When asked whether it was a busy night, he answers with a tired chuckle, "Very busy, both nights."

Over the past three years, as the northern California city of Vallejo has worked through a legal bankruptcy, the fire department has shrunk almost in half: from 28 on-duty firefighters to just 15.

The department has closed three of its eight stations, including one in the Glen Cove neighborhood, where Brew says there was a big house fire recently. According to Brew, the engine company closest to the burning home was closed, and by the time another company arrived from farther away, a second house had caught fire.

One day we asked for mutual aid from one of the surrounding areas, and they flat-out said, 'We can't do it.'

Brew says that kind of collateral damage is happening more and more. In cash-strapped Vallejo, the fire department is increasingly relying on an agreement for emergency backup, known as mutual aid, with neighboring cities.

"One day we asked for mutual aid from one of the surrounding areas, and they flat-out said, 'We can't do it.' … That caught me a little off-guard because that had never happened before," Brew says.

Eventually mutual aid will not be a viable option, according to Vallejo Fire Department spokesman William Tweedy.

"Every jurisdiction has less funding. Their people in their city say, 'Why are we providing services outside our city when we're not getting reimbursed for it?' " Tweedy says.

'Firefighters Not Available At This Station'

Vallejo is not the only city closing stations. Lawrence, Mass., has shuttered half of its firehouses. In August, San Jose, Calif., laid off almost 7 percent of its force and closed one station, which now has a large sign out front that reads: "In case of emergency, call 911. Firefighters not available at this station."

"There are a lot of neighbors here in this community," says San Jose Fire Capt. Chuck Rangel, "and we've had instances where people in distress either from a medical call or a fire go directly to the station and start knocking on the door." 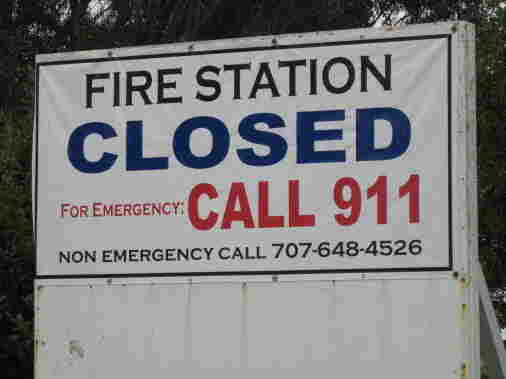 A sign outside a closed fire station in Vallejo, Calif., advises residents to call 911 for emergencies. Rachel Dornhelm for NPR hide caption

That's just what led to a tragedy in San Diego earlier this summer, when relatives brought a choking 2-year-old to the fire station down their block. The station was closed that day for budget reasons. It took 9 1/2 minutes for a paramedic to arrive. The boy did not survive.

Rangel says nothing can replace San Jose's firefighters, but in the meantime the city is using a computer system to try to allocate resources as best as possible.

Former Bay Area fire chief Stewart Gary, who now consults for local governments about their fire departments, says cuts and "brownouts" -- taking engines out of service -- are happening throughout the country. Gary says city managers facing shortfalls have told him the same thing.

"If I closed every library, if I stopped mowing the grass in every city park, I still can't close the deficit, because police and fire are in most cases 35, 45 percent of a city's expenses. And they have to get to the public safety costs," Gary says.

There's a debate over who's to blame. Some say firefighters' salaries and pensions are too high, while others cite disappearing tax revenue.

Preparing For The Worst

One of the concerns in California is what would happen when mutual aid is needed for a large event like a wildfire. Kim Zagaris, who oversees fire and rescue operations for the California Emergency Management Agency, says in the past he could depend on getting 175 local government engines to a fire along California's North Coast.

"But during last year's fires, the most we were able to get was 125 engines," Zagaris says.

In a statement, ISO, an insurance industry organization that rates cities' ability to respond to fires, says it has downgraded more cities this year than ever before.