Accessibility links
In College, Maybe Everybody IS Doing It: Cheating Is the NCAA capable of keeping student-athletes from skirting the rules? Anyone who thinks so should look at the University of North Carolina, says Frank Deford. If rules were broken there, it may be hard to find a team without a blemish. 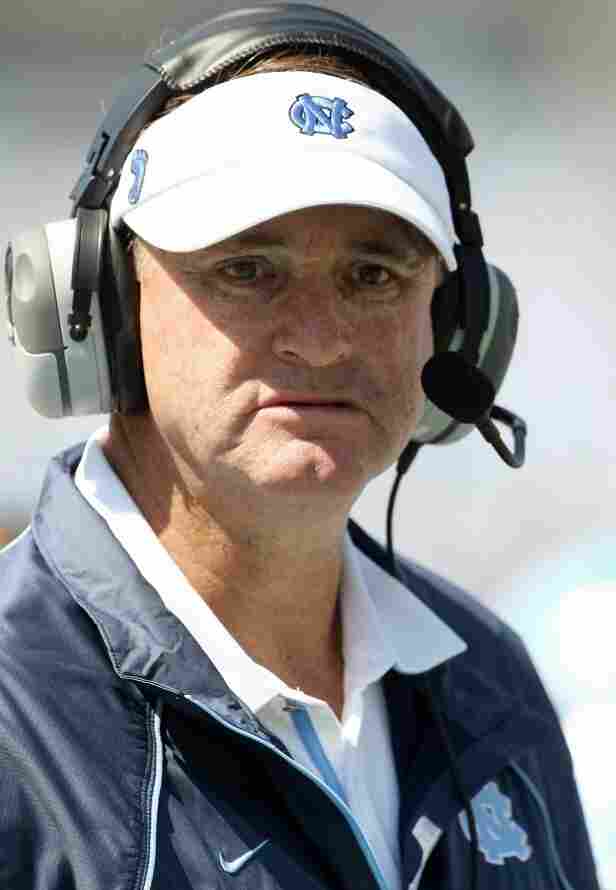 Coach Butch Davis' North Carolina football team is being investigated on allegations of both academic fraud and players having contact with agents. At least 12 players were suspended for the school's opening game. Streeter Lecka/Getty Images hide caption

It's the old business of garbage in/garbage out. The various colleges -- which is to say, the various athletic departments -- report grades to the NCAA, which accepts them prima facie. How can the NCAA ever tell if some stooge is taking a test for an athlete; if some tutor is writing a term paper for an athlete; if some professor is dishing out passing grades to the failing athletes he cheers for?

As Bob Knight, the retired basketball coach, says: If the NCAA had been in charge of Normandy, we would've attacked Greece, and given our soldiers all the wrong ammunition.

Consider the way the most recent academic scandal, at the University of North Carolina, was -- shall we generously say -- uncovered. The NCAA was investigating more obvious charges, that the Tar Heel players were dealing with agents, when it just blindly stumbled across the classroom shenanigans.

Even the bleeding hearts among us can only conclude that if they’re cheating at Chapel Hill, athletic academic fraud must be truly commonplace.

And last week, it was a newspaper, The Birmingham News, that uncovered the fact that a Kentucky basketball player, Eric Bledsoe, had gotten into school with a doctored transcript.

We could expect academic monkey business at Kentucky, because the basketball coach there, John Calipari, has already skipped out of two other colleges after serious violations scarred the programs on his watch. But the Carolina revelations are the more distressing, because it is one of the finest state universities in the nation.

Even the bleeding hearts among us can only conclude that if they're cheating at Chapel Hill, athletic academic fraud must be truly commonplace.

Saddest of all, when some courageous academics have dared blow the whistle -- at places like Tennessee, Ohio State and Minnesota -- they've all too often been castigated as tattletales. Hey, professor, get on the team.

I'll never forget a tutor from a big-time school literally crying on the phone to me as he confessed to his part in the corruption of athletics. He felt especially ashamed because it was his alma mater. "They tell me everybody does it," he said. "Is that really true?"

If it makes you feel any better, I replied, yeah, probably -- probably just about everybody. There are no referees in big-time college classrooms.