Accessibility links
Summers' Exit Yet Another White House Shake-Up Lawrence Summers is the third high-level member of President Obama's economic team to announce his departure in recent months, leaving the administration with the task of having to pick a new team at a time when confidence in the economic recovery remains in short supply. 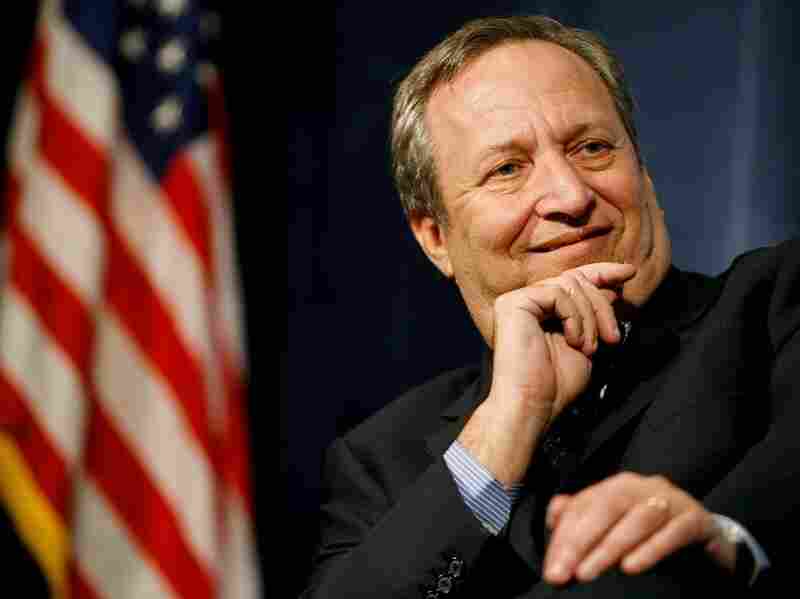 Lawrence Summers, director of the National Economic Council, says he plans to return to Harvard University at the end of the year. Chip Somodevilla/Getty Images hide caption

The impending departure of Lawrence Summers marks the third high-level member of the White House economic team to step down in recent months and leaves the administration with the task of selecting a new team when the economy is still fragile.

Summers, chief architect of President Obama's economic policies and a key voice in the stimulus and financial reform packages, had long said he would serve just two years. But his departure is yet another shake-up for a White House that has already lost Budget Director Peter Orszag and adviser Christina Romer. Treasury Secretary Timothy Geithner would be the only one of Obama's top-tier economic advisers to remain.

The administration is said to be considering a woman to replace Summers, who announced Tuesday that he will leave at the end of this year.

NPR's John Ydstie said there are reports that the White House wants to replace Summers with "a businessperson to try repair relations with the business community, which has complained they don't have a voice in the White House."

"One name being circulated is Anne Mulcahy, former CEO of Xerox," Ydstie said.

Others said to be under consideration include current Xerox Chief Executive Ursula Burns and Laura Tyson, who held the National Economic Council director's post during the Clinton administration.

In a statement Tuesday, Obama said he is grateful for Summers' service during a time of "great peril for our country."

"While we have much work ahead to repair the damage done by the recession, we are on a better path thanks in no small measure to Larry's wise counsel," Obama said.

Although Summers had indicated that he'd leave the administration after two years, "it was when Obama reappointed Ben Bernanke last summer to be chairman of the Federal Reserve -- a job Summers was said to be interested in -- that probably clinched the deal," Ydstie said.

A senior administration official told NPR that the president had asked Summers last fall to stay through the end of 2010 to see through the passage of financial regulatory legislation and the continued implementation of the economic recovery program.

Obama said he intends to continue to seek Summers' advice on an informal basis.

White House spokesman Robert Gibbs said given the pressure caused by trying to deal day to day with the recession, it should come as no surprise that Summers would want to step out of the fray and return to Harvard University.

In the past two years, Gibbs said, White House staff often wondered if it could get any crazier. "And [on] many days around here, the answer is 'absolutely,' " he said.

But Summers has a reputation for sometimes clashing with other administration officials in a White House where the president has been referred to as "no-drama Obama."

A book released this week by so-called car czar Steven Rattner, the man who led the administration's efforts to restructure the auto industry, details run-ins that Summers had with another economic adviser, Austan Goolsbee, over whether to bail out Chrysler and about how much of that debate to air in front of the president.

"Being head of the National Economic Council may not have been the best fit for Summers," Ydstie said. He added that Summers "has to be an honest broker for policies going to the president, and some say Summers was often more interested in promoting his own ideas then those of others."

With unemployment hovering near double digits and jitters over the slow pace of economic recovery, many Democrats are concerned about the possible perception of instability in the White House economic team ahead of midterm elections.

"Never before has the need for a fresh start in Washington been more pressing," the Ohio lawmaker said during a speech in Cleveland.

Obama had hinted at possible departures during a town hall discussion Monday.

"This is tough, the work that they do," Obama said. "They've been at it for two years, and they're going to have a whole range of decisions about family that will factor into this as well."

When Summers returns to Harvard, he will be going back to his roots. At age 28, he became one of the youngest professors to receive tenure at Harvard. After leaving the Clinton Cabinet in 2001, he returned to Harvard as its new president. Summers had a tense relationship with the university faculty, which erupted over his comment that gender differences explained why fewer women pursued math and science careers. He resigned in 2006.

NPR's Ari Shapiro contributed to this report, which also contains material from The Associated Press