Accessibility links
Execution Of Virginia Woman Stirs Objections Teresa Lewis was executed Thursday evening for plotting the 2002 murders of her husband and stepson. The 41-year-old woman's supporters argued her mental capacity should have exempted her from the death penalty. But the U.S. Supreme Court denied her petition. 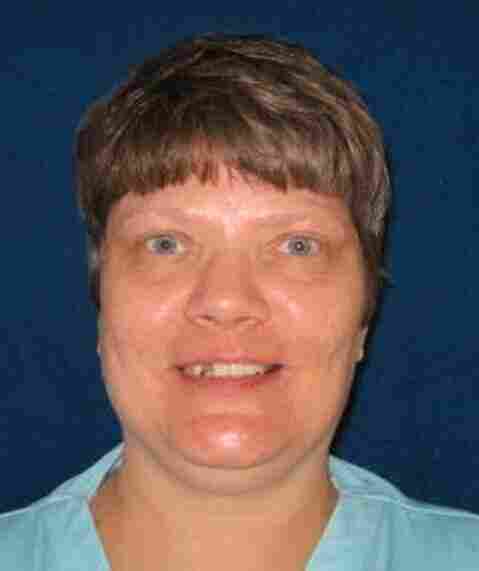 Teresa Lewis, 41, received the death penalty after pleading guilty to being the mastermind in a plot to kill her husband and stepson. But Lewis' lawyer says his client has an IQ of just 72, which is considered borderline for mental retardation. Virginia Department of Corrections/AP hide caption

Teresa Lewis was executed Thursday evening, becoming the first woman in Virginia put to death in nearly a century.

The 41-year-old woman was sentenced to death by lethal injection after pleading guilty to being the mastermind in a plot to kill her husband and stepson. But her supporters argued her low IQ should have exempted her from the death penalty.

Prosecutors describe Lewis as the brains of the murder plot, and at sentencing, a judge called her the "head of the serpent." In 2002, Lewis hired two men, Rodney Fuller and Matthew Shallenberger, to come into her family's trailer in the middle of the night and shoot her husband, Julian Clifton Lewis Jr., and stepson, Julian Lewis. She and the gunmen were to share $250,000 in assets and life insurance.

"She was pulled into a terrible crime, to be sure, which she's admitted from the beginning, but she was not the mastermind," says Jim Rocap, one of Lewis' attorneys. He says his client has an IQ of just 72, which is considered borderline for mental retardation.

Rocap says Shallenberger, one of the triggermen, was actually the driving force behind the murders.

"He had an IQ that was 40 points higher than Teresa's and he saw her as an easy mark and he took advantage and he was the one who was leading her," he says. "It makes absolutely no sense for him to have been given a life sentence while Teresa ends up with the harshest of all sentences."

A Plea For Clemency

Lewis' attorneys submitted a petition for clemency on Aug. 25 that was denied Sept. 17 by Virginia Gov. Bob McDonnell. On Monday, the governor denied a request to reconsider his decision. On Tuesday, the U.S. Supreme Court declined to hear the case.

The U.S. Supreme Court has ruled that those with IQs below 70 cannot be subject to the death penalty. Lewis' IQ was just above that line.

Elizabeth Rapaport, a law professor at the University of New Mexico, says that doesn't mean a governor couldn't commute a sentence for that very reason.

"Because a person who is a couple points above the cutoff is clearly limited and handicapped," she says. "So she didn't have a constitutional basis for a finding that she was not eligible for capital punishment, but the governor, of course, was free to determine it was an important consideration."

But in this case, Virginia Gov. Bob McDonnell declined clemency for Lewis.  In a statement, he said numerous evaluations did not find Lewis mentally retarded, and he said he found no compelling reason to set aside the death sentence.

This execution has drawn more attention than others because Lewis is a woman. Of the 1,226 inmates executed since 1976, only 11 have been women.

"A person should not be exempt from the death penalty just because she is a woman," says Kent Scheidegger, who is with the Criminal Justice Legal Foundation, which supports the death penalty. "Very few women have been executed because very few women commit the kinds of murders that call for the death penalty. But the few who do are very often this type, that is, the black-widow type, who murder their husbands for the insurance money and things like that. That's what we have here. It is a financial-gain murder; it is a betrayal of trust and it is a double murder."

But Lewis' supporters say the death penalty is not warranted -- not only because of her low IQ but also because her male accomplices received lesser sentences of life in prison.

Her attorneys argued to the U.S. Supreme Court that new evidence shows Lewis could not have been the mastermind. They say she had a drug addiction, and that combined with her mental disability should have made her ineligible for the death penalty.

But in a 7-2 decision, the nation's highest court declined to hear the case, which means the execution moves forward.