Accessibility links
Seeing The Internet As An 'Information Weapon' Nuclear and biological weapons are covered under arms control pacts. But no such agreement exists for cyberweapons. The reason, experts say, is that some countries see "cyber disarmament" as a way to quash pro-democracy activists.

The United States and other world powers have agreed to arms control measures in recent years that limit the deployment and use of nuclear, biological and chemical weapons, as well as tanks and other artillery pieces.

A Fight To Control Information

Countries that have endorsed a Russian-sponsored U.N. initiative to strengthen "information security" on the Internet:

So why is there no arms control measure that would apply to the use of cyberweapons?

It is not for lack of attention to the issue. Government and military leaders around the world have warned that the next world war is likely to be fought at least partly in cyberspace, and cyber "disarmament" discussions have been under way at the United Nations for more than a decade and more recently at the International Telecommunications Union, the leading U.N. agency for information technology issues.

The problem is that governments have widely varying ideas of what constitutes a "cyberweapon" -- and what a "cyberwar" might look like.

Advanced industrial democracies are likely to see a cyberattack as an assault on the computer infrastructure that underlies power, telecommunications, transportation and financial systems. 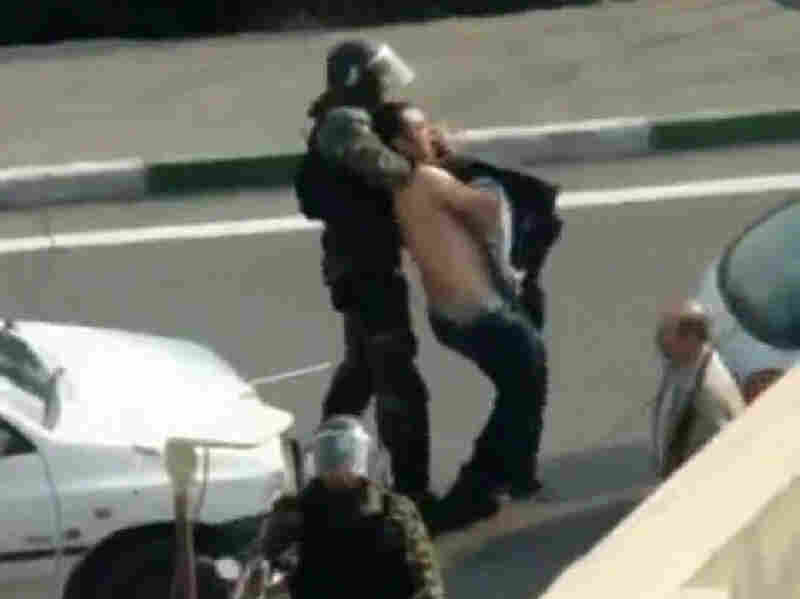 After Iran blocked text messages and much of the Internet in an effort to deal with anti-government protesters in February, the U.S. accused the country of imposing "a near total information blockade." This image, from a video posted on You Tube, allegedly shows Iranian police arresting and beating an opposition protester in Tehran. AFP hide caption

Part I Of This Report

But many developing countries see cyberwar in political terms.

The Russian government, the leading advocate for a cyber-arms-control agreement, prefers the term "information war" and describes the threat in terms that make cyber conflict sound like a battle of ideas.

Each year since 1998, Russia has introduced a resolution at the United Nations calling for an international agreement to combat what it calls "information terrorism." Russian leaders worry that the Internet makes it so easy for people to communicate that a government could use the Internet to challenge another country's political system. Some Russian diplomats have actually revived an old Soviet term -- "ideological aggression" -- to describe what governments could do to each other via the Internet.

At a U.N. disarmament conference in 2008, Sergei Korotkov of the Russian Defense Ministry argued that anytime a government promotes ideas on the Internet with the goal of subverting another country's government -- even in the name of democratic reform -- it should qualify as "aggression." And that, in turn, would make it illegal under the U.N. Charter.

"Practically any information operation conducted by a state or a number of states against another state would be qualified as an interference into internal affairs," Korotkov said through an interpreter. So any good cause, like [the] promotion of democracy, cannot be used as a justification for such actions."

The United States has consistently opposed efforts to limit Internet communication, but the Russians are not alone in their interpretation of the "information" threat. James Lewis, who has advised the U.N. Institute for Disarmament Research, says he's heard similar views from several governments.

"The thing that really unites them is their desire to control information, to control content," Lewis says. "They see information as a weapon. An official from one of those countries told me [that] Twitter is an American plot to destabilize foreign governments. That's what they think. And so they're asking, 'How do we get laws that control the information weapon?' "

Last year, Russia successfully sponsored an even sharper version of its cyber disarmament proposal at a summit of the Shanghai Cooperation Organization, which includes China and four Central Asian countries as well as Russia. The accord defined "information war," in part, as an effort by a state to undermine another's "political, economic, and social systems."

Using the term "mass psychologic [sic] brainwashing," the agreement said that the dissemination of information "harmful to the spiritual, moral and cultural spheres of other states" should be considered a "security threat."

U.S. diplomats suspect the Russians view the Shanghai accord as a blueprint for the kind of cyber disarmament agreement they would like to see approved at the U.N.

Given the open nature of the Internet, the implementation of content controls in the name of cyberpeace may require some changes in the way the Internet is governed.

In recent months, the debate over Internet governance and cyber-arms control has moved to the International Telecommunications Union. The ITU secretary-general, Hamadoun Toure, has even suggested that his organization could "broker" a cyber disarmament accord.

"My dream is to have a cyberpeace treaty," Toure said in London earlier this month.

U.S. officials are wary of Toure's agenda, in part because he has linked his cyber disarmament ideas to proposals for restructuring Internet governance in ways that would boost government controls. But his ideas have considerable support in the developing world.

Harvard law professor Jack Goldsmith, author of Who Controls the Internet, sees a parallel between broad geopolitical trends and the changing international lineup on cyber governance. Just as emerging economic powers are redefining the global economy, he says, those same countries are also trying to influence the Internet.

"How could it be any other way?" Goldsmith says. "[The Internet] is a hugely important [and] consequential political, social and economic tool. And powerful nations are going to try to wield it and shape it to reflect their interests. The network will increasingly, I fear, look like what they want it to look like."

The desire of many countries to see more regulation in cyberspace has prompted the Obama administration to work with Russia and other governments to establish some norms of "appropriate government behavior" in cyberspace.

But the United States would not support information controls -- and continuing disagreements over the definition of cyberweapons are likely to complicate any effort to reach international agreement on a broad cyber disarmament accord.