Accessibility links
Dissent Grows Over U.S. Presence In Afghanistan The U.S. surge strategy in Afghanistan is under new scrutiny as 2010 recently became the deadliest year for U.S. and coalition troops there. Intended as a bold new push, Obama's plan has faced major setbacks, fueling debate over whether the effort is worth it. 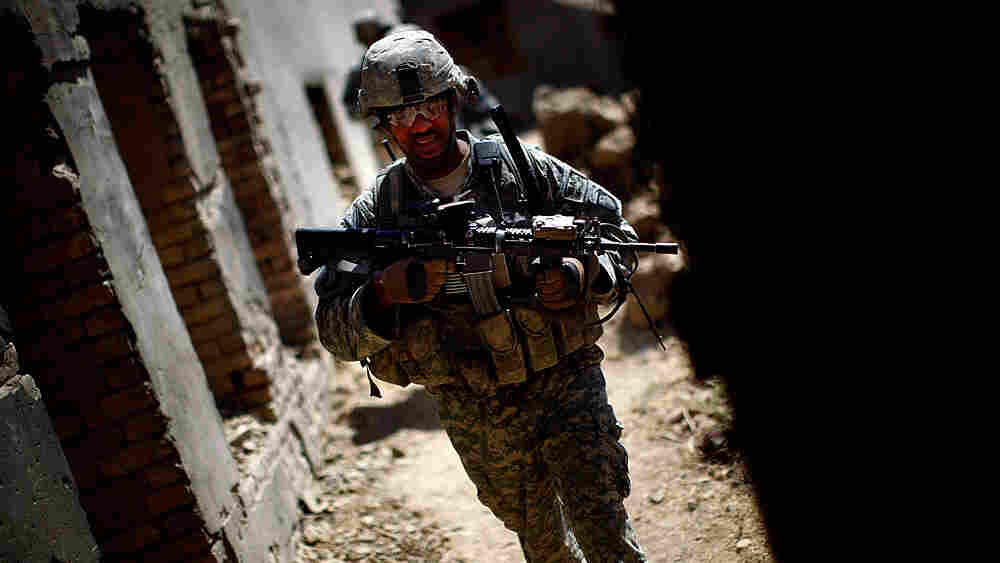 Sgt. 1st Class Phillip Carroll, with the 101st Airborne Division, patrols in the Arghandab River valley outside Kandahar, Afghanistan, this week. Debate in Washington is growing over the scope and duration of continued U.S. military operations in Afghanistan. David Gilkey/NPR hide caption 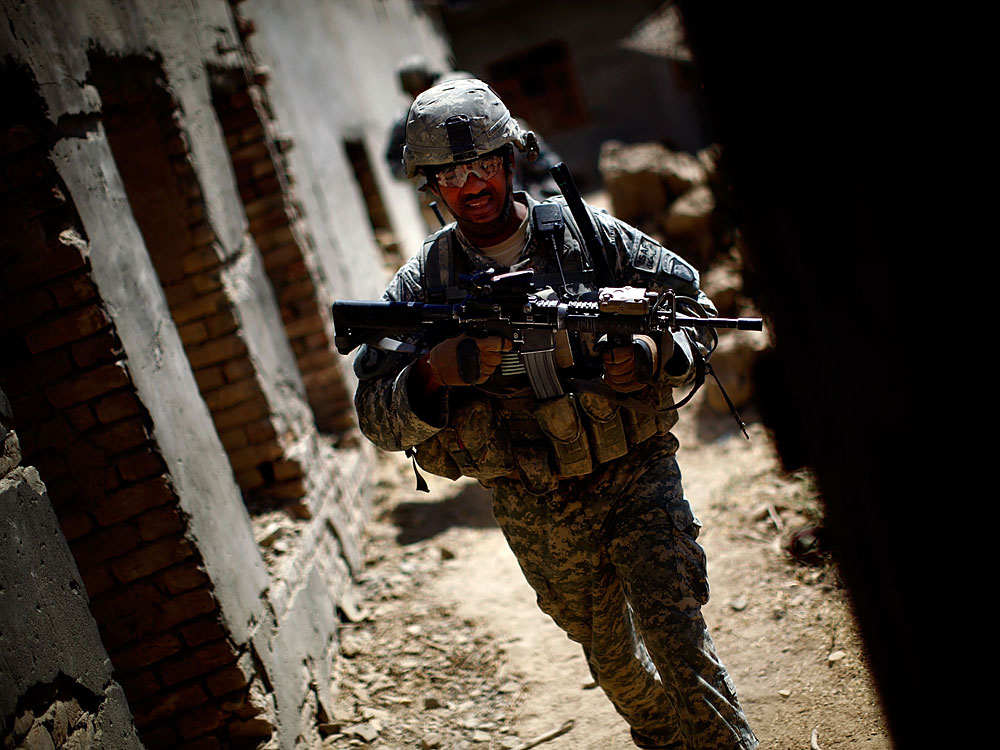 Sgt. 1st Class Phillip Carroll, with the 101st Airborne Division, patrols in the Arghandab River valley outside Kandahar, Afghanistan, this week. Debate in Washington is growing over the scope and duration of continued U.S. military operations in Afghanistan.

This is the deadliest year yet for U.S. and foreign troops in Afghanistan. So far, at least 530 service personnel -- including more than 300 Americans -- have died in 2010. The casualties come despite the recent injection of some 30,000 American troops as part of a new strategy to help stabilize the security situation in Afghanistan.

When President Obama unveiled the new strategy for Afghanistan late last year, it was meant to represent a bold new push -- a full commitment -- to a conflict that for years had been neglected but continued to grow.

The strategy called for a surge of American troops and civilians to help build up Afghanistan's security forces, its government and its infrastructure.

But there have been major setbacks -- violence has soared, anti-corruption efforts stalled, and elections have been mired in fraud.

All this is helping fuel debate over whether the effort is worth it.

Paul Pillar, a former CIA counterterrorism official now with Georgetown University, says the U.S. ought to look at the current commitment to Afghanistan in rigorous cost-benefit terms. Pillar says the U.S. has vastly expanded its original goal of rousting al-Qaida from Afghanistan and is now undertaking an expensive and protracted counterinsurgency operation to stabilize the country.

"We are spending $100 billion or close to that a year, as well as an expenditure of blood that is now over 1,200 killed and countless others wounded," Pillar says. "And we have lost sight of what this is or what this is not doing to keep Americans safe from terrorism."

Pillar says Afghanistan is no longer a war of necessity. He says the U.S. does not need to defeat the Afghan Taliban because the group isn't a national security threat.

Max Boot, a senior fellow in national security studies at the Council on Foreign Relations, disagrees. He says the Afghan Taliban still has strong links to al-Qaida and other international terrorist groups, and that the U.S. needs to tackle them.

Boot says there is still a solid base of supporters for the counterinsurgency strategy, but he says many people are expecting too much, too fast.

"The reality is while we have been there for nine years, we're only now starting to make a serious effort to win the war," he says. "The surge is only now taking effect, and operations of the surge forces are only now beginning, and we know that counterinsurgency is doable, but it takes time."

More Of The Same Failed Policies?

Matthew Hoh, a former Marine Corps captain who served in Afghanistan, says the U.S. has been doing counterinsurgency since 2004 and that the current strategy is just more of what has failed over the past few years.

"I have a list of quotes from every commanding general since 2004 in Afghanistan, assuring success, assuring that victory is one year away, they just need some more troops and some more time," he says.

Hoh, now a senior fellow at the Center for International Policy and the director of the Afghanistan Study Group, says sinking more resources into Afghanistan is counterproductive.

"As every year we add more troops or spend more money, the Taliban grow in size, and support for the Karzai government decreases, and the conflict gets worse along any measure you want to measure, whether it's IEDs, civilian casualties, coalition casualties," Hoh says.

According to a new book by Washington Post journalist Bob Woodward, the notion of continually adding more troops and time to the conflict was a factor for Obama when he considered the current strategy for Afghanistan.

Woodward says the president crafted his own exit strategy and issued a six-page document outlining the terms of U.S. involvement there. Interviews in the book confirm long-held speculation that there are deep divisions within the administration over Afghanistan.

Andrew Exum, a fellow with the Center for a New American Security, says that's not surprising, given the gravity of the situation.

"It doesn't shock me, doesn't scare me that there's a dynamic debate within the administration about whether or not the strategy could succeed," he says.

Exum says he'd be disappointed if there weren't that type of debate.

Exum says the new revelations outlined in the book, along with the growing chorus of dissent among many analysts in Washington, will undoubtedly throw a much stronger spotlight on a progress report on Afghanistan that is due in December.