Accessibility links
Forest Near Mount Rushmore Suffers Beetle Attack Officials say the beetle-killed trees are a fire hazard, and the National Park Service is now pursuing the biggest forest-thinning operation in the monument's history. Some argue the operation plays into the hands of the logging industry, while others say it's too little too late. 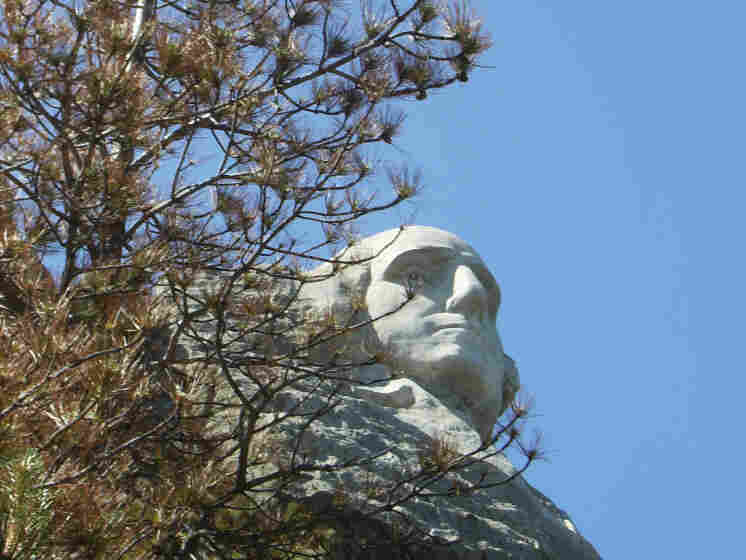 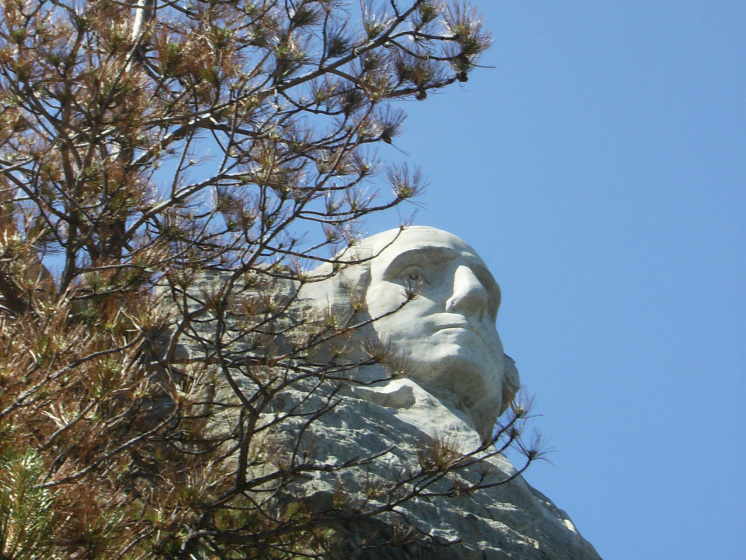 The Black Hills forest around Mount Rushmore is turning brown because of a mountain pine beetle infestation.

The Black Hills of South Dakota are turning brown. Thousands of acres of pine trees in the central part of the hills have been killed by mountain pine beetles, and Mount Rushmore National Memorial is near the center of the epidemic. National Park officials are taking drastic measures to help the forest around Rushmore survive the onslaught. The monument is now in the middle of the biggest thinning operation in its history.

The normally tranquil forest around the monument is being shattered by the sound of chainsaws. Crews of loggers are cutting a lot of pine trees.

"It's a matter of controlling the exponential growth of this pine beetle," says Bruce Weisman, the National Park ranger leading the fight against the insects. "We've seen this explosion and it's coming over the ridgeline directly at us right now."

Crews are cutting down trees below the four faces and feeding them into huge wood chippers. Weisman says to save this forest from destruction, the smaller overgrown pine trees on 500 acres of the park must come down. He says this is about more than beetles. Bug-killed trees are prone to burn, and one lightning strike could start a major wildfire.

"Our fuel loads would be so tremendous that [a] catastrophic firestorm would sweep right over the top of the memorial and it would be a catastrophic loss of all facilities," he says. 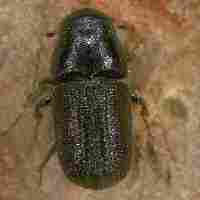 The idea is that thinning out the trees will make the forest healthier. But critics like Brian Brademeyer with the group Friends of the Norbeck say the beetle problem is being overblown to give big timber companies access to adjacent public lands.

"This whole beetle hysteria that dead trees are more fire-prone than green trees, it's all self-serving, logging institution-building. They should just stay in their offices," Brademeyer says.

While some environmentalists are critical of the National Park Service for going too far, other locals say government officials aren't doing enough.

"It's almost like waiting until the horse goes out and then you shut the barn door," says Jack Bradt, who has helped run a wilderness outfitter in the Black Hills since 1977.

Fresh from an afternoon of work on his dude ranch, a bead of sweat lines the brim of Bradt's straw cowboy hat, and his pearl-snap Western shirt is dusty and frayed.

"Essentially everything that I have worked all of my life for is in potential danger because of the situation that ... we've got going here," he says.

Bradt says the thinning now under way at Rushmore should have happened on a wider scale years ago. But the pine beetles and the wildfires that threaten Bradt's livelihood may be linked to climate change: Beetle populations are normally kept in check by very cold winters, and it's believed warmer winters have allowed them to expand.

Millions of acres across the western United States and up into the Canadian Rockies are now infested. Dan Licht, a biologist with the National Park Service, says even with mitigation efforts at places like Rushmore, there is a good deal of uncertainty over what will happen next.

Logging is not pretty. Big machines are ripping up the forest floor. But park officials in South Dakota stress the urgency. They say to do nothing would increase the risk of a much bigger disaster. For now, the future of the forest around Rushmore hinges on what the beetles do next.