Accessibility links
'Buried': Six Feet Under, And Breathing Hard Panic sets in fast when Paul (Ryan Reynolds) regains consciousness to discover that kidnappers have buried him alive, with only a phone to help him arrange a ransom. A strong script puts the audience in Paul's shoes -- well, in his claustrophobic pine box -- right at the start. (Recommended) 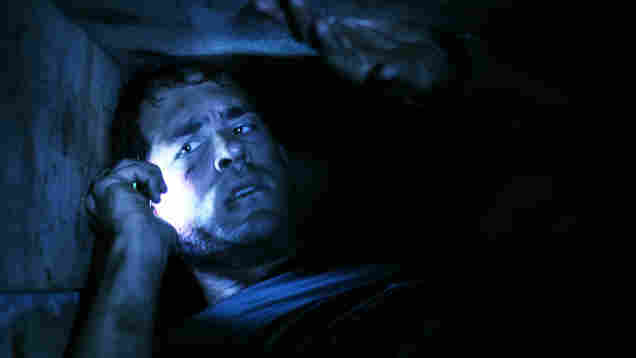 Panic Room: Paul (Ryan Reynolds) is going nowhere fast in the taut new thriller Buried, set entirely in the coffin where his kidnappers have stashed him. Lionsgate hide caption

Sure to become a staple in film-school classes titled "How to Make a Blockbuster With Only an Actor, a Box and a Blackberry," Buried may be the first thriller where the sole stunt is the film’s mise-en-scene. Even the recent rash of minimalist frighteners -- Paranormal Activity, Frozen, Open Water — offer moments of relief from, respectively, the purgatory of a haunted bedroom, a stalled ski lift and a shark-infested ocean. In Buried, however, the audience is as trapped as its cursed protagonist.

A slowly sinking title sequence leads us into 12 seconds of pitch-black screen — an eternity of movie silence — followed by anxious gasps and a feeble sputter of light. More blackness, into which an unseen Paul Conroy (Ryan Reynolds) begins to scream. In tandem with Paul, and by the light of a Zippo, we discover he’s trapped in a wooden coffin somewhere below ground. It’s the point at which the Dutch horror film The Vanishing slammed shut, but Buried still has almost 90 minutes to go -- and somehow, miraculously, we already need to know where.

As oxygen leaches out of the coffin, information dribbles in. Paul, a civilian contractor in Iraq, was driving a supply truck when his convoy was ambushed and his colleagues shot. Having interred him with a cell phone, a pen and a few glow sticks, his kidnappers use the first to demand $5 million ransom from the U.S. government. The phone is a lifeline but also an instrument of torment, and not just because its menus are in Arabic: We will soon be reminded that terrorists and torture videos go hand in hand.

While Paul desperately calls everyone from 411 to the State Department, Spanish director Rodrigo Cortes works hard to bind us to him and invest us in his fate. Crucial voice cameos by Robert Paterson, Samantha Mathis and the estimable Stephen Tobolowsky (as the oily human-resources rep for Paul’s employer) propel the plot and vary the tone, but Buried is basically a one-man show. Forced to flex his dramatic acting chops at last, Reynolds delivers a performance of escalating desperation; it’s an impressive trick, and one that we have to buy if the movie is to succeed.

Though alluding briefly to the downside of outsourcing, the disposability of civilian contractors and the cut-’em-loose attitudes of the corporations that employ them, Buried mostly keeps the politics on low and the panic on high. Crucially, cinematographer Eduard Grau is constantly on the move, scurrying around Paul’s supine body like a tweaking rat. Exploring his claustrophobic location with spellbinding fluidity, Grau careens from one wall to another, at one point making an almost 360-degree turn without computer assistance.

Gimmicky but riveting, this Hitchcock-by-way-of-Stephen King thriller benefits enormously from Chris Sparling’s ingenious screenplay, which even finds a novel and skin-crawling way to increase the occupancy of Paul’s coffin. It’s brilliantly silly entertainment whose flaws are glaring only in hindsight; in the moment, you’ll have much more fun if you stop looking for holes in the script and join Paul in looking for a way out. (Recommended)