Accessibility links
Researchers Produce Data Demonstrating Einstein's Theory Of Relativity Einstein's theory of relativity posits that time -- what we perceive to be regular, consistent ticks on our watches -- isn't actually constant. Thought experiments from the early 1900s challenged our understanding of time, and now scientists have actual data to back Einstein up. 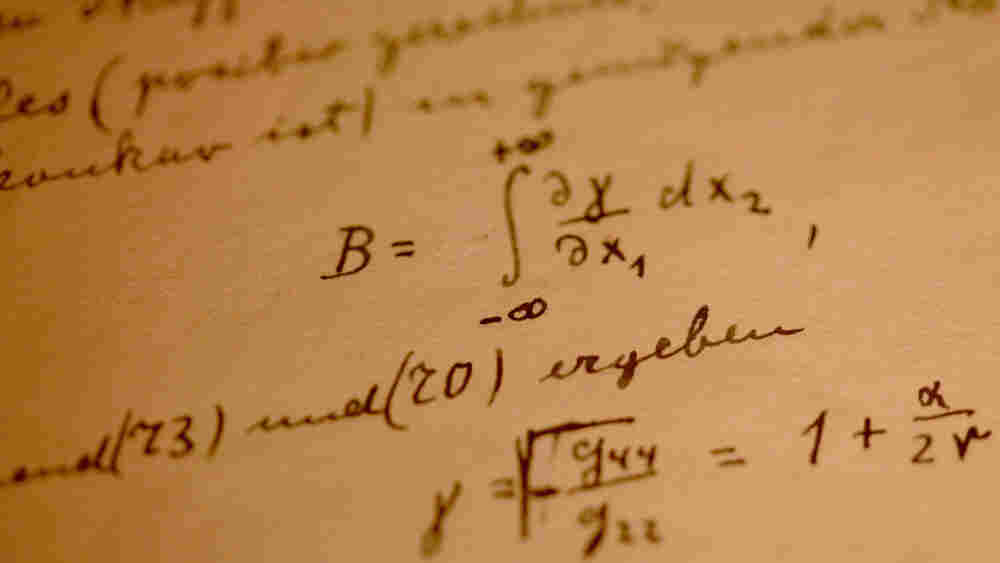 A detail from Albert Einstein's General Theory of Relativity, which was displayed at the Israeli Academy of Sciences and Humanities in March 2010. Einstein donated the 46-page handwritten manuscript to The Hebrew University of Jerusalem in 1925. David Silverman/Getty Images hide caption 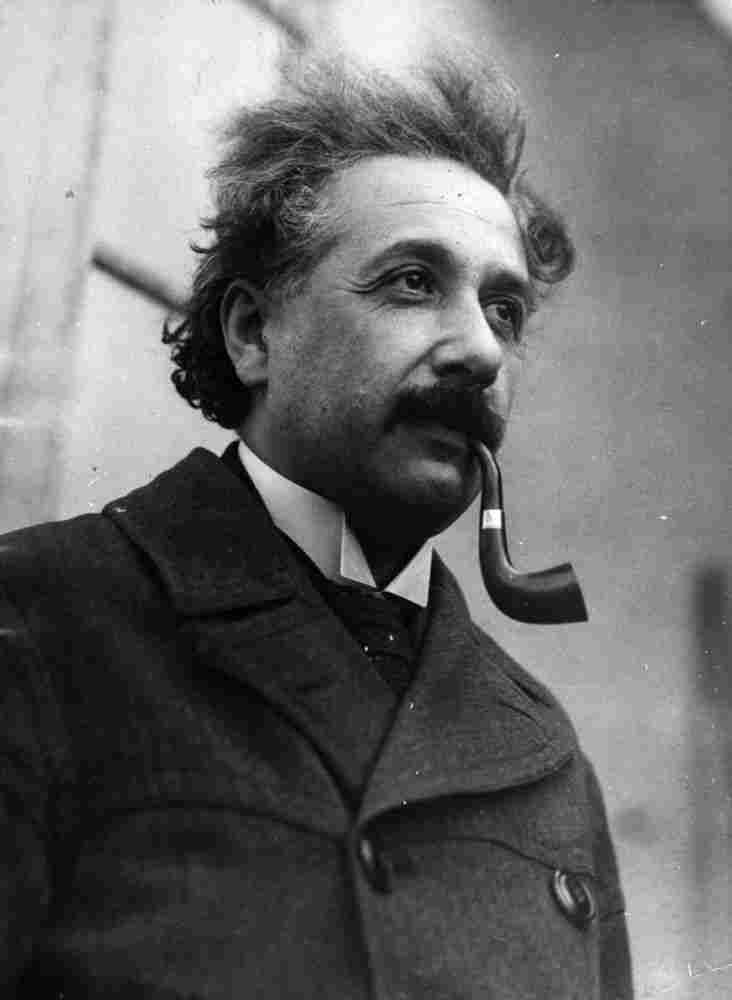 Albert Einstein's theory of relativity challenges how we perceive time in our everyday lives. Now, researchers have a device precise and accurate enough to measure its effects in the laboratory. Keystone/Hulton Archive/Getty Images hide caption 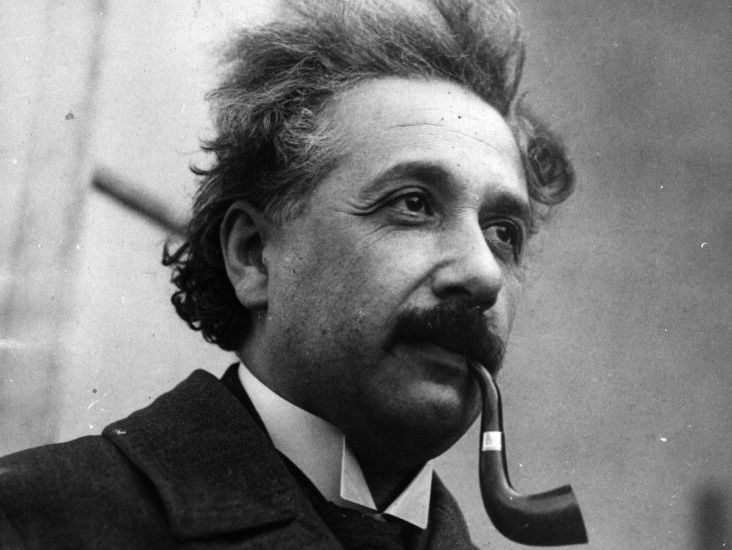 Albert Einstein's theory of relativity challenges how we perceive time in our everyday lives. Now, researchers have a device precise and accurate enough to measure its effects in the laboratory.

Einstein's theories of relativity suggest time is affected by how fast you're moving and how close you are to a gravitational field, like Earth's.

In everyday life, these time fluctuations are tiny. But now, scientists at the National Institute of Standards and Technology in Boulder, Colo., have measured them with unprecedented accuracy.

James Chin-Wen Chou and his colleagues used a pair of atomic clocks to demonstrate the relativistic changes. These clocks are based on the vibrations of an aluminum atom that's missing an electron. In one experiment, one of the clocks was 33 centimeters above the other. The higher clock experienced a slightly smaller tug of gravity, and ticked more slowly than the lower clock. In another experiment, one of the clocks moved at approximately 20 miles an hour compared with the other.

The difference in tick rate was small. Very small. Just 0.0000000000000001 percent different. The new results appear in the journal Science.

NIST scientists hope to improve the accuracy of their clocks so that they can measure even smaller relativistic changes.

A Primer On Relativity

Let's be serious. If you really want to understand the theory of relativity, I'd suggest a few years of graduate study in physics. But to give you some idea, here's a quick sketch of what is going on.

In 1905, physicists were just coming to terms with the idea that light might move at a constant speed. Einstein started toying around with the implications of that idea, so he posed a number of thought experiments that go something like this.

Say you're standing on an open-sided rail car tossing a ball up in the air. Even when the train is moving, to you on the train the ball appears to be going up and down. But think about someone standing on the ground watching the train go by. To the stationary observer, because the train is moving, the ball appears to go on a diagonal path. Think about that a moment. If you're looking straight at the ball the moment it leaves the thrower's hand, you would have to move your eyes (or your head) in the direction that the train was moving to keep the ball in the center of your vision. Compare the position of the ball with respect to you when it leaves the thrower's hand with the position at the peak of the toss, and you should see what I mean when I say the motion of the ball is diagonal to the observer on the ground.

Now imagine instead that instead of a ball, the train rider was shining a pencil-beam of light at the ceiling of the rail car. On the train, the beam would appear to go straight up. But to the observer on the ground it would take a movement of the eye or the head in the direction that the train was moving to keep track of  the beam of light as it went up to the ceiling. OK, you really wouldn't have to move your head or eyes because the light is traveling so fast, but this is a thought experiment.

It's hard not to think of time as a constant, since it's so counterintuitive to our everyday lives. And Sean Carroll, a theoretical physicist at Caltech in Pasadena, is sympathetic. "This is something people have difficulty wrapping their minds around, because it doesn't show up in any obvious ways in our everyday lives. It's a very subtle effect, until you're flying close to a black hole or moving close to the speed of light."

If you are still a bit confused, I feel your pain. Play with the thought experiment in your mind for a while and see if it gets any clearer. Or better still, try that graduate physics program I mentioned earlier.

And there's more bad news. It's called special relativity because it only applies to the simple case when the observer and the observed are moving at constant speeds with respect to one another. What happens if the objects are accelerating or decelerating? It took Einstein a decade to figure that one out, and I'm not even going to explain it here. Suffice it to say that gravity also has an effect on time. The stronger the gravitational field, the slower the time.