Accessibility links
'Dexter' Is Back, With Just What We've Been Dying For The fifth season of Dexter, which premieres Sunday night, is better than ever, says TV critic David Bianculli, who calls it "one of the most inventive and exciting shows on TV." 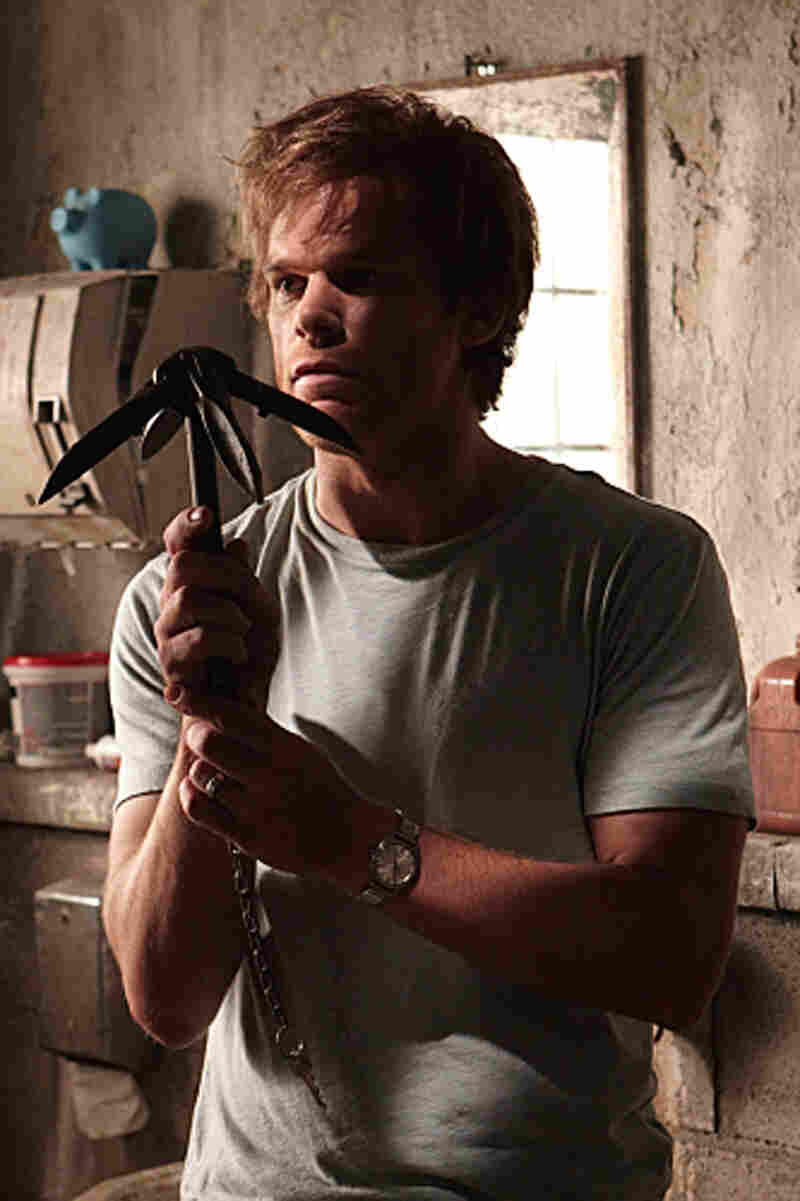 Dexter (Michael C. Hall) grapples -- both literally and emotionally -- with an overwhelming loss in the premiere episode of Dexter. Sonja Flemming/Showtime hide caption 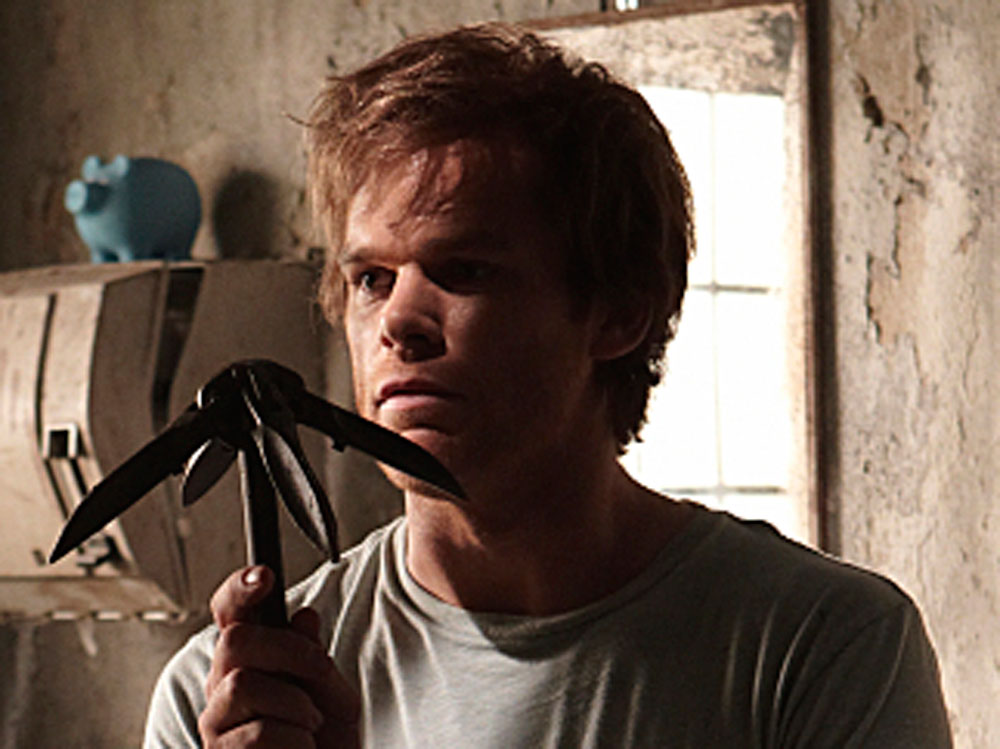 Dexter (Michael C. Hall) grapples -- both literally and emotionally -- with an overwhelming loss in the premiere episode of Dexter.

There's something wrong with broadcast network television, and this week makes it glaringly obvious. This is Fall Premiere Week, when ABC, CBS, NBC, Fox and the CW are trying their best to impress us with their new and returning shows. Yet their thunder continues to be stolen by cable. Last Sunday, it was the premiere of HBO's Boardwalk Empire, which did so well after one showing -- with critics and viewers -- that it already has been renewed for season two. AMC's Mad Men continues to serve up fabulous first-run hours on Sundays -- and now, beginning this weekend, a third cable network is competing for bragging rights as having the best prime-time drama series on television. That's because Showtime is presenting the fifth-season premiere of Dexter, one of the most inventive and exciting shows on TV.

Michael C. Hall, who played the uptight gay undertaker on HBO's Six Feet Under, stars as Dexter Morgan, a forensics expert whose specialty is blood-spatter analysis. He helps solve murders as a member of the Miami police department.

But he has a deep, dark secret: He's a serial killer himself, and channels his murderous impulses by hunting other serial killers -- by serving, secretly, as judge, jury and especially executioner. Yes, it's a twisted idea for a series. And Dexter, over its first four seasons, has explored those twists with breathtaking imagination.

We've learned about, and witnessed in flashback, the childhood trauma that made Dexter into the emotionless shell that he is. And over the years, we've watched him go from faking emotions to experiencing real ones -- and even finding love. Rita, played by Julie Benz, was a battered woman with two young children when Dexter met her, and they found peace simply by being together. Eventually, they got married and had a baby of their own, and Dexter seemed ... happy.

But after years of spilling blood in secret, Dexter had his unexpectedly normal life shattered in just as bloody a fashion. (Warning: spoilers ahead.) He had a showdown to the death with another serial murderer, called the Trinity Killer, played all last season by guest star John Lithgow. Dexter was ultimately victorious -- but then returned home to find that the Trinity Killer had just previously claimed his final victim: Dexter's wife, Rita. The season ended, Lithgow won an Emmy for his performance -- and Sunday, we finally find out what Dexter will do next, with his wife gone, his world shattered and three young kids in tow. 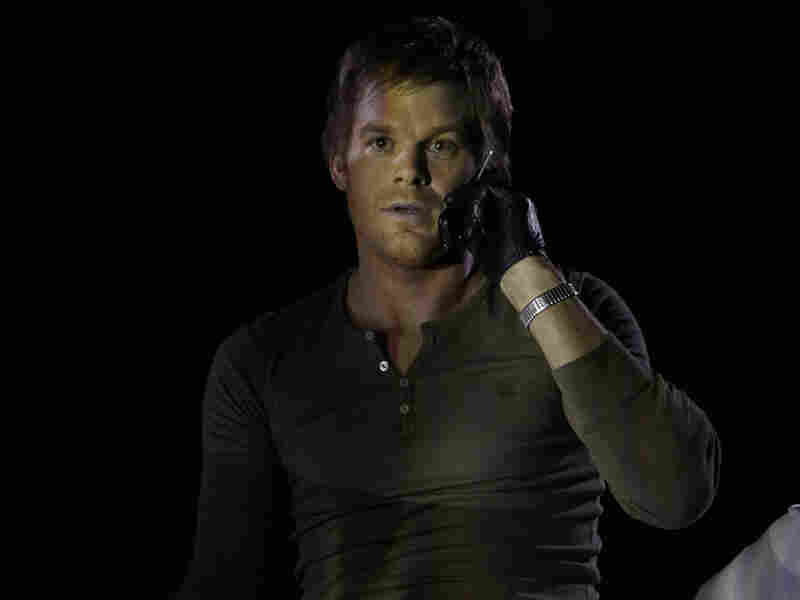 A police-department forensics expert by day, Dexter -- the adopted son of a policeman and the brother of a homicide detective -- moonlights as a serial killer with a strict bad-guys-only code. Sonja Flemming/Showtime hide caption 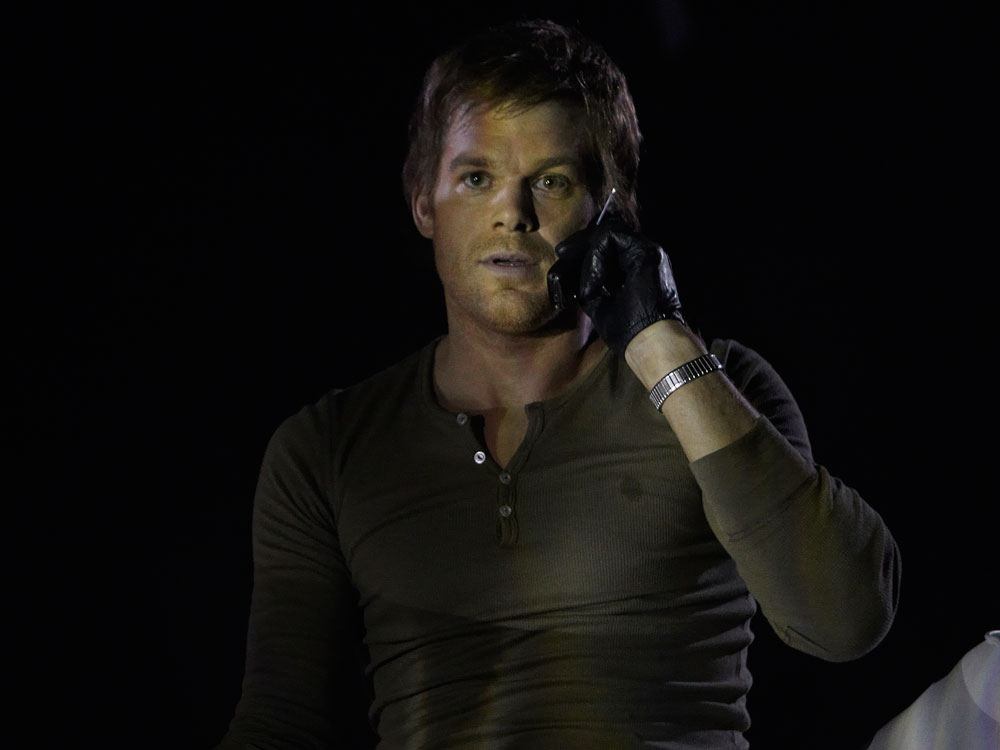 A police-department forensics expert by day, Dexter -- the adopted son of a policeman and the brother of a homicide detective -- moonlights as a serial killer with a strict bad-guys-only code.

Season Five begins exactly where season four ended -- at the crime scene, with Dexter cradling his baby, whom Dexter found sitting and crying in a pool of his mother's blood. Where do you go from there? Well, to some of the obvious places: police reports, funeral preparations, conversations with co-workers and in-laws. But it's the non-obvious places that make this character, and this series, so daringly original.

From the start, Dexter the TV series has relied on the same crucial narrative gimmick introduced in the original novels by Jeff Lindsay. We see things through Dexter's eyes, and hear his thoughts -- which, in the TV version, come through in a variety of ways. Sometimes, he sees, and talks with, the ghost of his late foster father. Other times, he has vivid flashbacks. And always, he's dropping in quick bits of voice-over narration, to tell us what he's really thinking, sometimes even after one of his own flashbacks. In a scene from Sunday's season premiere, Dexter recalls a phone call from the night he first met Rita: We hear their conversation, and then, returning to the present, we hear Dexter say goodbye and he's sorry as he revs up the engine on his boat and drives away.

So where is Dexter driving his boat, and where does his life go from there? I'm not telling. But I will tell you that, like almost every episode of Dexter, it's a surprising, sometimes jaw-dropping journey. Longtime Dexter fans have come to expect moments that have you all but screaming at your TV set in disbelief, or wondering how you'll be able to wait a week for the next installment. I've previewed this season's first three episodes, and I had to pick up my jaw twice. And at the end of episode three, I was angry at Showtime because it hadn't sent No. 4. Dexter is that good.