Accessibility links
Momentum Builds Behind Chinese Workers' Protests Over the summer, a rash of suicides and strikes hit factories in southern China as workers protested against labor conditions. Rather than cracking down, factory bosses have responded by improving salaries and working conditions. But more strikes are expected. 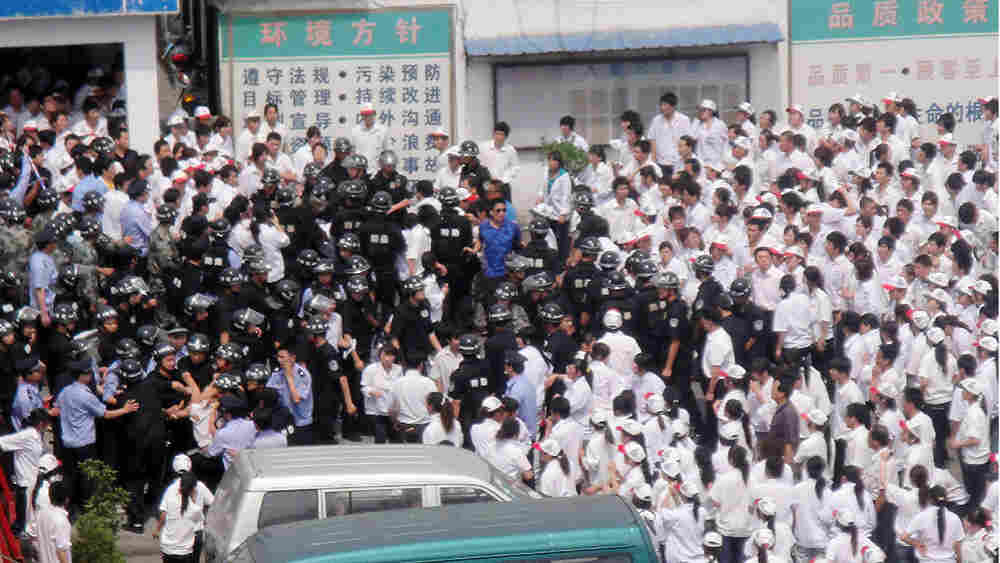 Some 2,000 Chinese workers clash with police as they stage a strike outside the Taiwan-funded KOK Machinery rubber factory in Kunshan, east China's Jiangsu province, on June 7. AFP/Getty Images hide caption 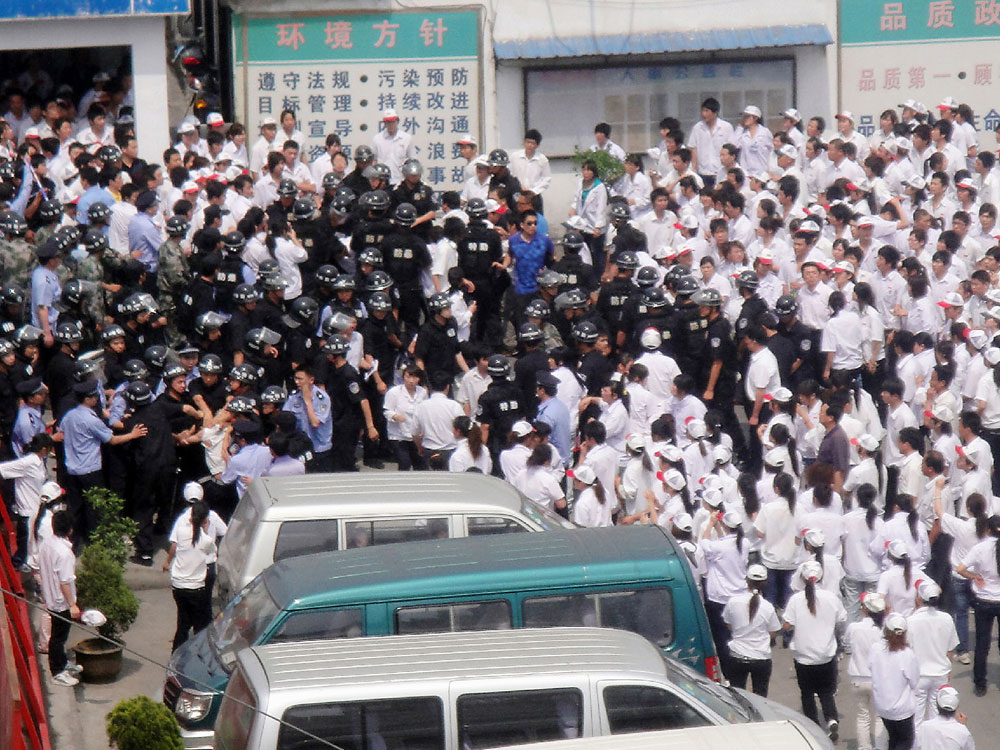 Some 2,000 Chinese workers clash with police as they stage a strike outside the Taiwan-funded KOK Machinery rubber factory in Kunshan, east China's Jiangsu province, on June 7.

Over the summer, a rash of suicides and strikes hit factories in southern China as workers protested against labor conditions. Rather than cracking down, factory bosses have responded to the protests by increasing salaries and improving working conditions.

Word of the better conditions has filtered through to other workers in southern China, and some observers are predicting more strikes in coming months.

The Taiwanese company Foxconn has set up a sprawling campus of factories in the southern city of Shenzhen, employing hundreds of thousands of workers.

There’s a saying here — you can have the boss’s money, but he’ll take your life.

But earlier in the year, a spate of suicides hit the company: workers jumping off the top of dormitories to their deaths in protest against military-style discipline enforced in the factory.

Workers there are reluctant to speak to the media, but one supervisor, who only gives his family name, Li, says everyone in Shenzhen knows the system is harsh.

"Everyone knows Foxconn’s management system is the strictest. Sometimes you have to work a whole month without a day off, at least 12 hours a day," Li says. "And they don’t let people from the same town work or live together. So it’s difficult to build up friendships that could lead to strikes."

At other factories, it was a different method of protest. At one Honda auto plant in nearby Foshan, workers came out in a series of well-organized strikes, demanding better pay and conditions.

Migrant workers have sporadically protested for years in Shenzhen, but Liu Kaiming, who heads a civil society organization called the Institute for Contemporary Observation, says he thinks these protests mark a turning point. In both cases, he says, the factory bosses responded by immediately saying they would raise salaries and improve working conditions.

"This is all happening, firstly, because it is a new, younger generation of migrant workers, who won’t accept such bad conditions," he says. "Secondly, there’s a shortage of workers, so they know they have more leverage. And thirdly, cell phones and the Internet mean they know more about the outside world, and are better able to organize as well."

At Shenzhen train station, workers come in from the countryside and head to places like the Songgang Jiashan factory, where the workers have been unhappy for years.

Now, empowered by the success of the Foxconn and Honda protests, a group of them, led by a 30-year-old migrant, Liu Dechang, are huddled in the back room of a small restaurant, plotting a strike.

These workers are not skilled, so they perhaps have less leverage than others. But they are determined.

Liu Dechang says conditions at the factory are appalling, but the Taiwanese boss won’t listen to their complaints. And the bosses always have good relations with Communist Party officials, he says, which prevents change from happening.

As a result, workers are extolling a communist struggle to a Communist Party government that has ditched its allegiance to the workers and joined forces with capitalists. Indeed, Karl Marx could well have looked at the factories of Shenzhen and seen a country ripe for a communist revolution.

One of the workers at the meeting, 23-year-old Zai Gui from the rural province of Guizhou, has had enough, though. As he leaves the restaurant, he says he’s taking the other route open to him.

"I’m going home, back to my home province. I’ve had enough of this. There’s a saying here -- you can have the boss’s money, but he’ll take your life. It’s just not worth it anymore," Zai says.

Either way, the factory towns of China look as if they may be on the verge of major change. And if workers say they’ve had enough and leave -- as they are beginning to do -- wages will rise. If strikes increase, and bosses relent, wages will also rise, with all the implications that could bring.